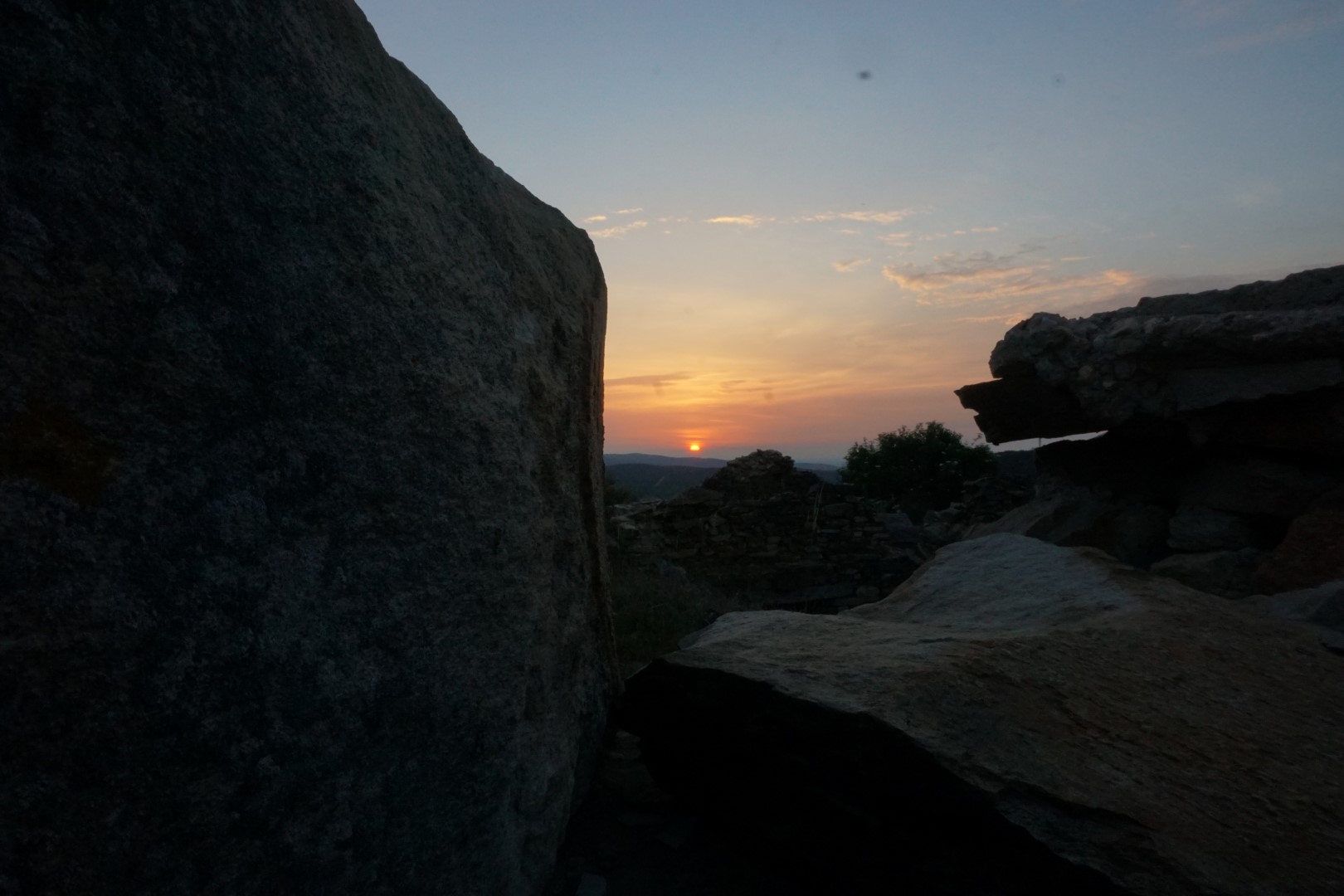 Last night was noisy, but at least, at this altitude, it was cooler than we’ve become used to. We are up at dawn and gather outside the albergue. 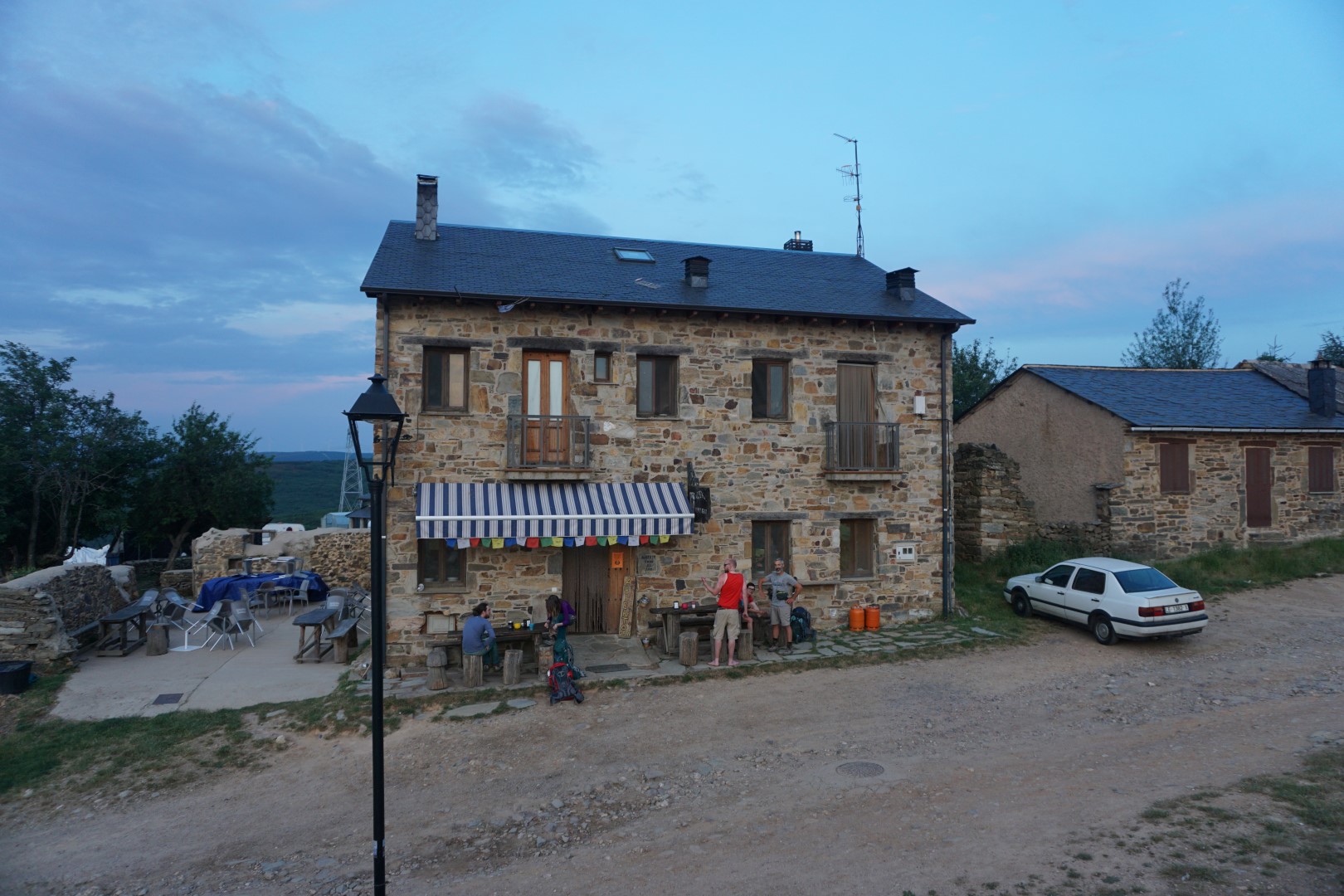 We met up last night with a French-Canadian couple with whom we shared dinner a week or so ago.  They were fitter than us and were averaging 35-40km per day so we were surprised to find them behind us. It turns out that Jean was having a major Camino event – he’d taken a day out from walking to find some reliable wifi and resign from his job and join a new start-up company.  This made him very happy…

I’m must say we were all a bit jealous.  The very happy Jean is one of my favourite Camino memories…

Off we trek up the road into the hills. Today we will pass the second great Camino monument, La Cruz de Ferro (The Iron Cross). This is a simple 5m wooden pole atop which is an iron cross. It marks one of the highest points on the Camino (1505m) but it has come to mean much more than a simple waypoint.

We arrive not long after dawn. 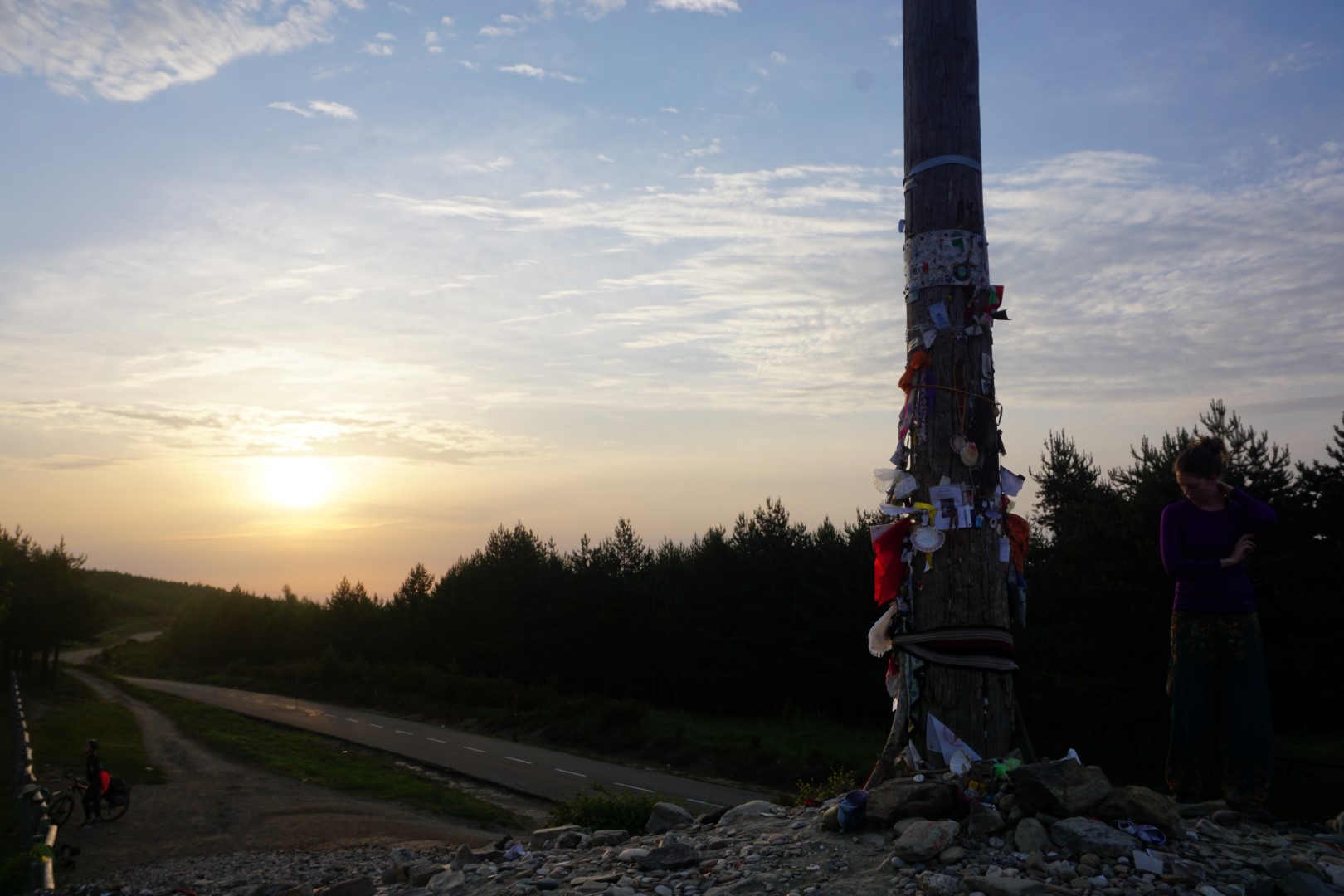 The idea is simple. You bring something, often a stone, from your home and you place it at the foot of the cross and then you turn and walk away, leaving it behind.

For Christians the symbolism is obvious, for others the emotional weight of this place is just as clear.

A huge mound of rocks and stones and photos, bits of paper, detritus from thousands of peregrinos over the years surrounds the pole. Jen, Hamish and myself have each carried small stone from home to here and now it is time to leave it and walk away.

We are early today so, thankfully, the cross is quiet.  We place our stones in silence.  We do not ask each other any questions.

Again, I am struck by the enormous symbolism of the Camino.  The Way carries its religious heritage lightly. Yes, you are on what was originally (probably) a Catholic pilgrimage but you largely pick that up by osmosis.  There is no prosletyzing.  And yet…

Every now and then something sneaks up on you – the albergue in Bericanos, the first great pilgrim monument outside Pamplona and you feel the presence of a millenium of fellow travellers and of something greater than the simple sum-of-the-parts.

This is one of the those places.

We spend maybe 30 minutes here, looking at what others have left behind, and thinking of our own passage to this time and this place. 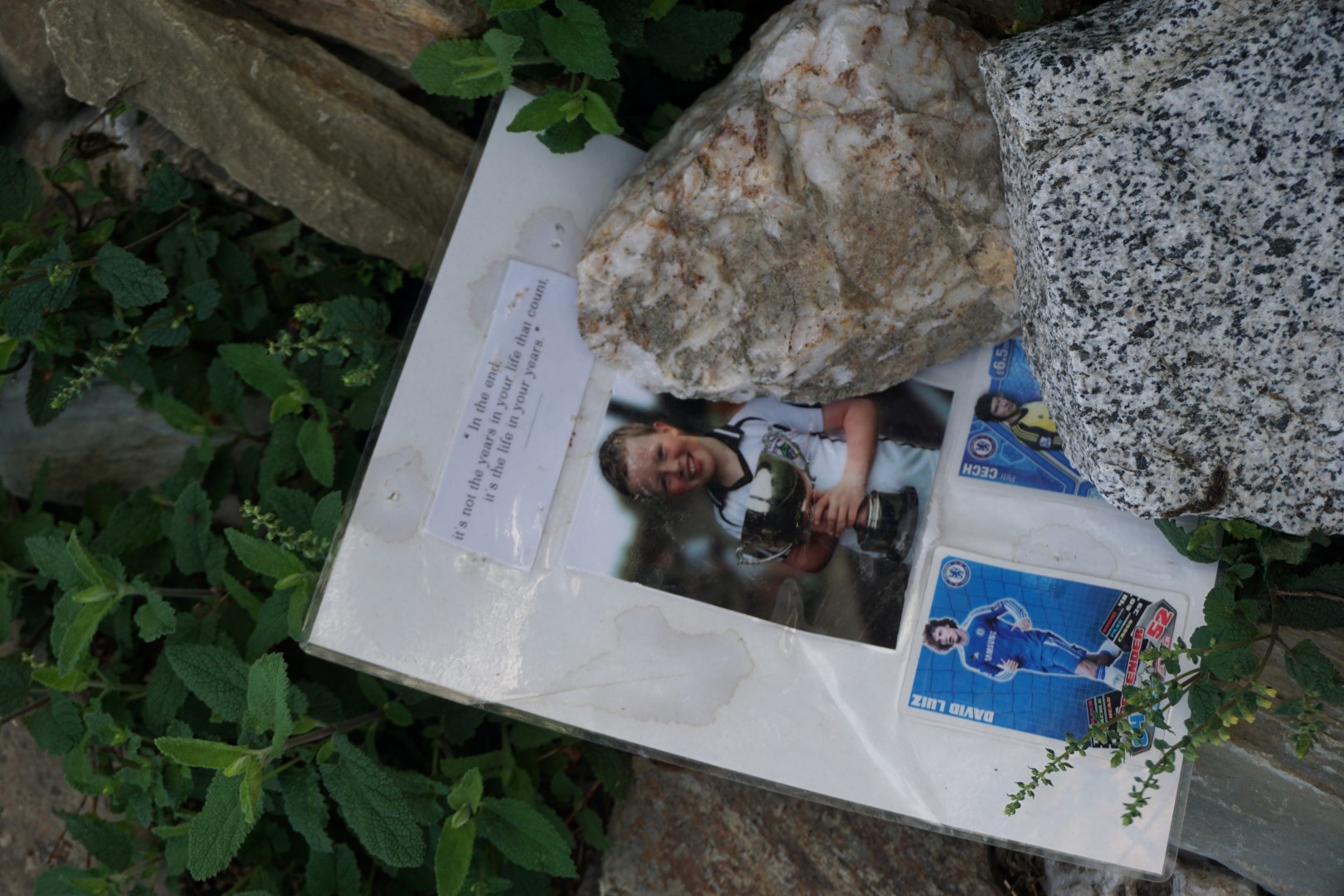 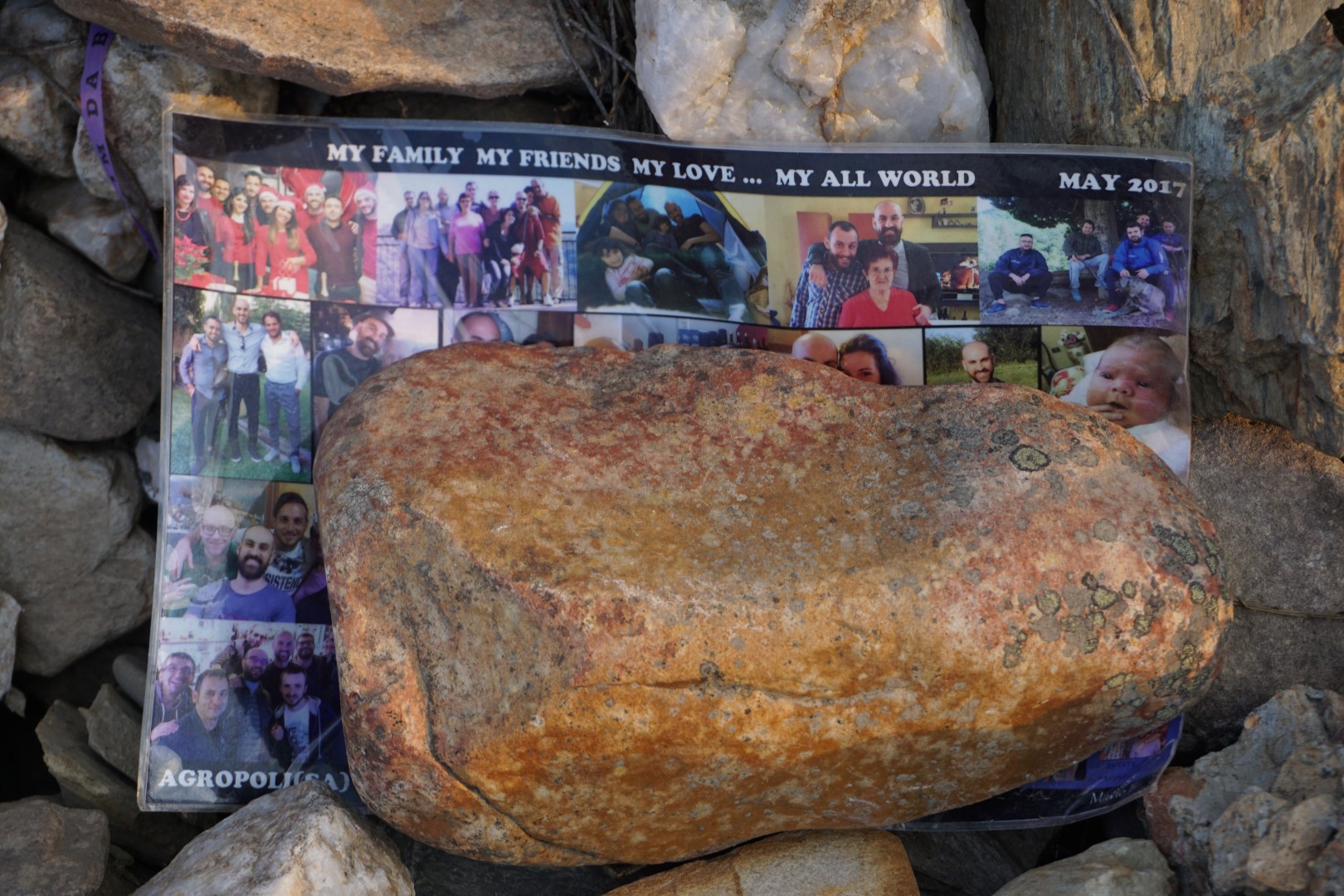 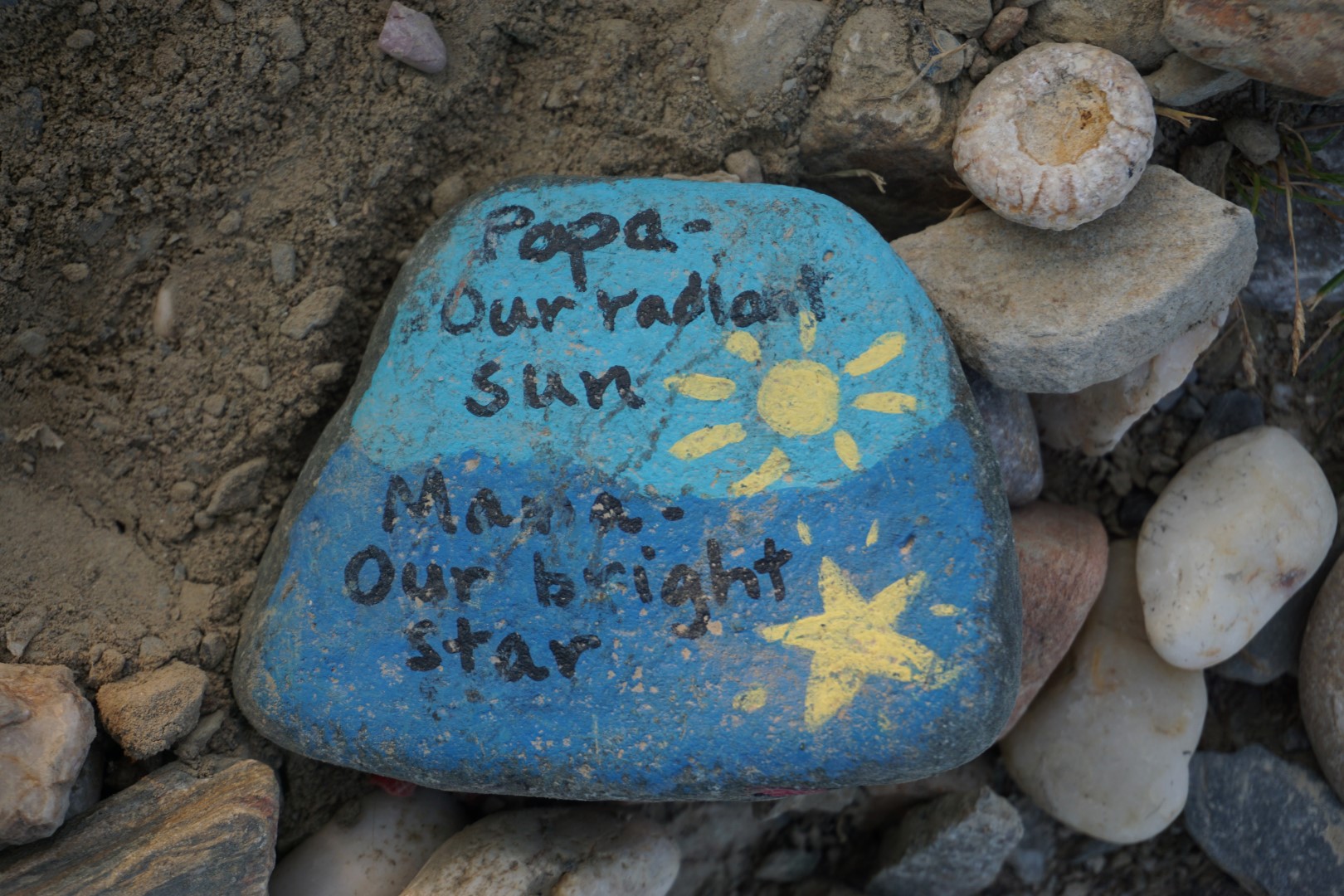 We head off, over the hills… 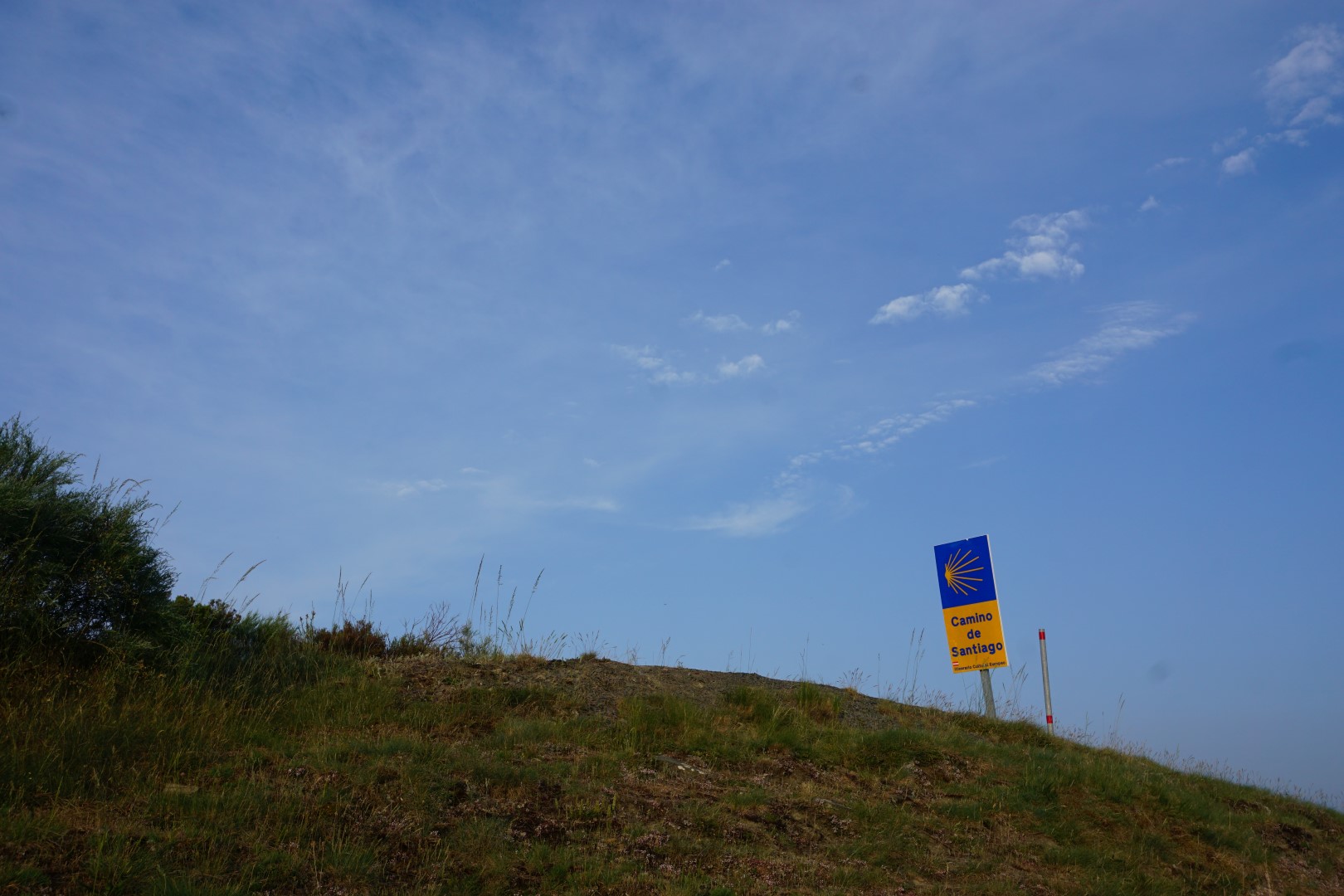 After a few km we come to Manjarin in which a collection of eccentrics are doing something (not entirely clear what) related to the Knights Templar. 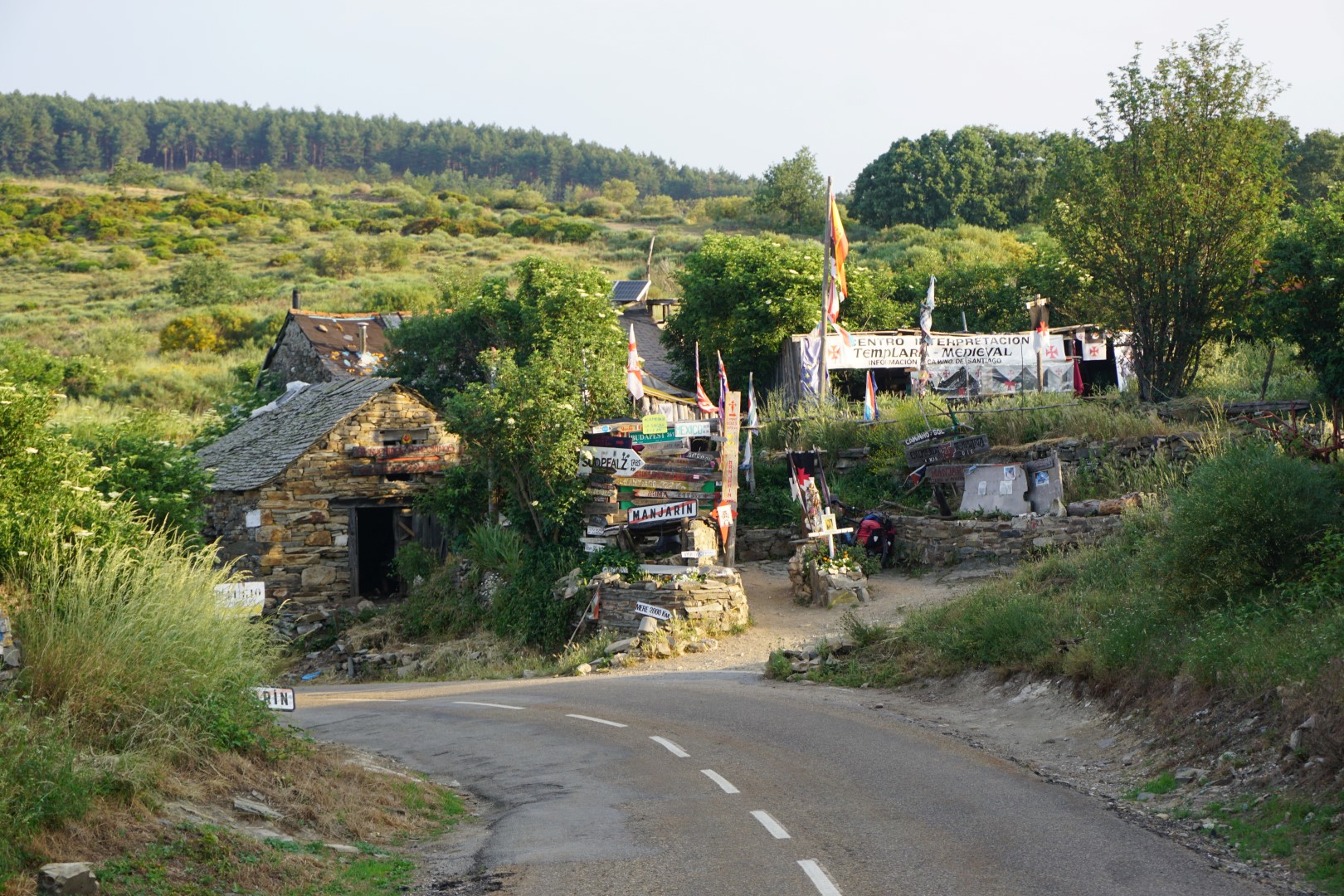 We vist their ‘compound’ and Hamish tries the toilet facilities which he reckons are original and much to be avoided.  Somewhat bemused we move on. 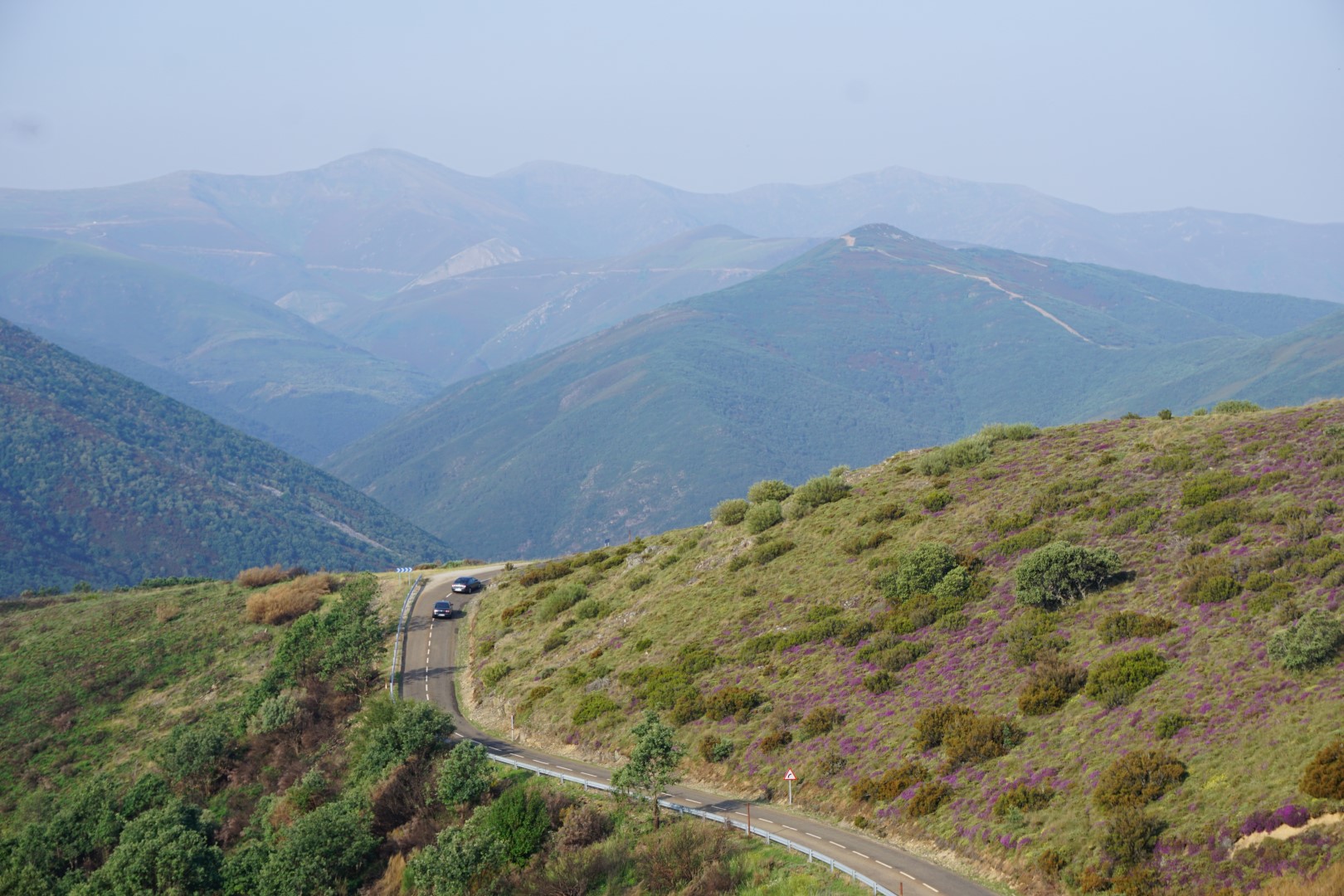 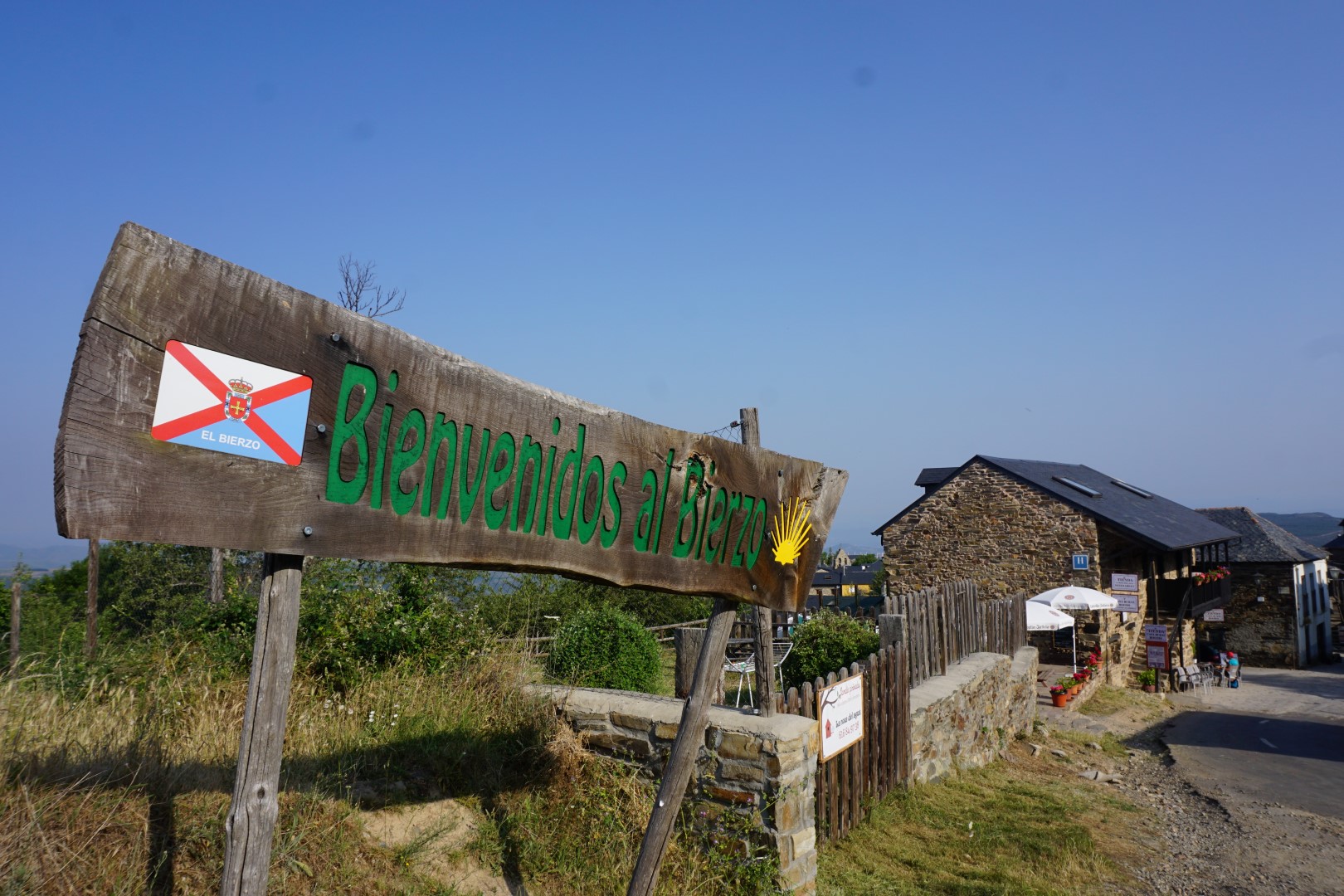 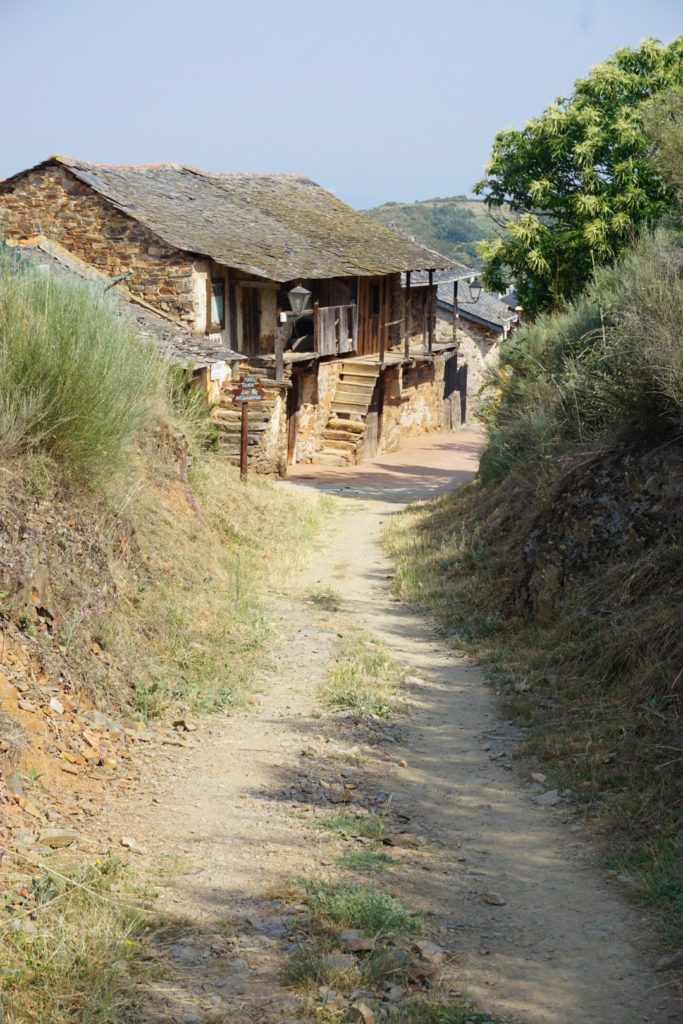 It’s getting very hot by the time we arrive in Molinaseca. 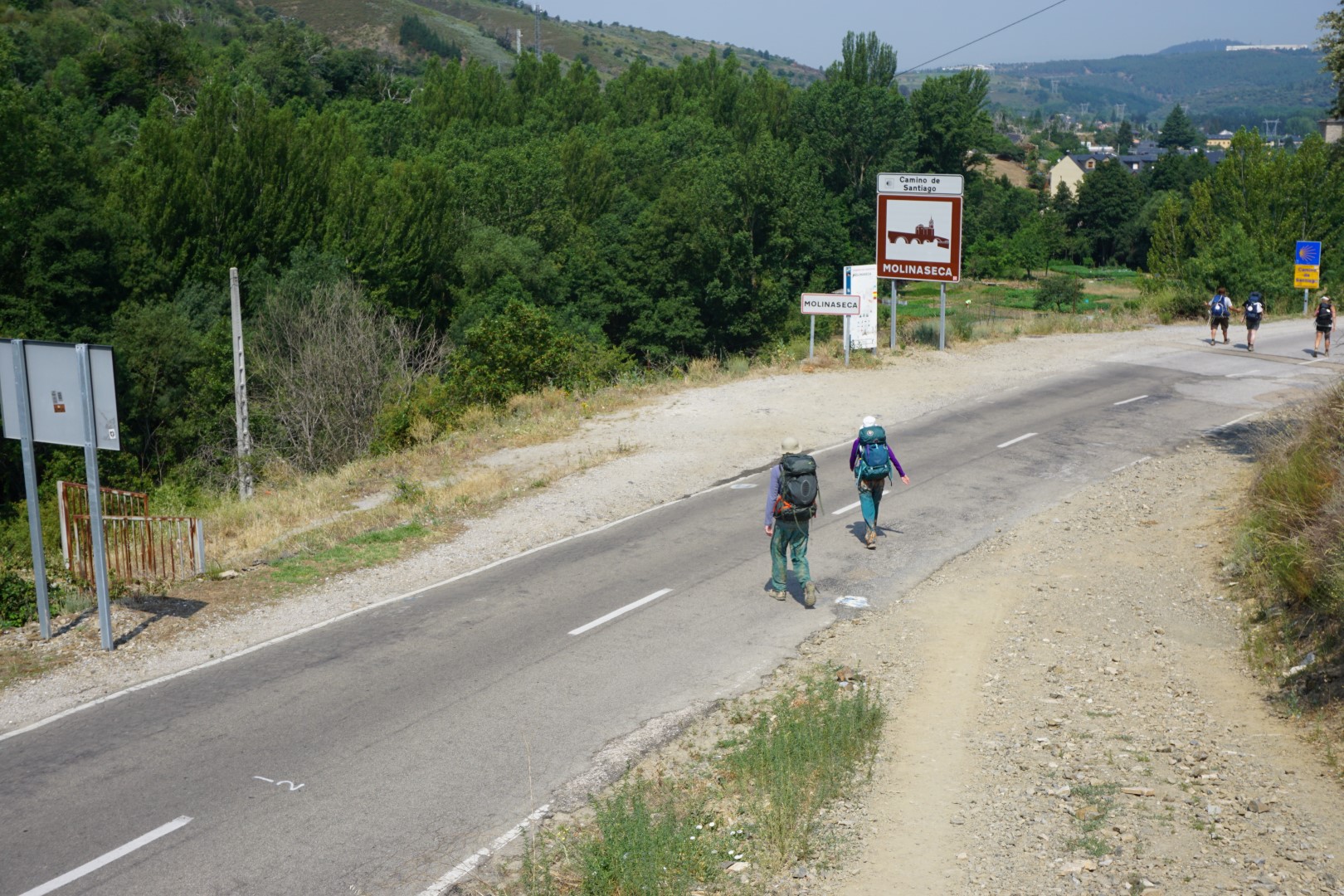 This is a very different town. It seems to be a holiday spot for Spaniards and, unlike most of the small towns through which we pass, isn’t entirely reliant on peregrino traffic for its survival.

We’ve run out of money again so spent 30 mins trying, unsuccessfully, to find a cash machine. So we blow our remaining euros on some ice cream and Jen and Hamish go for a swim in the river. 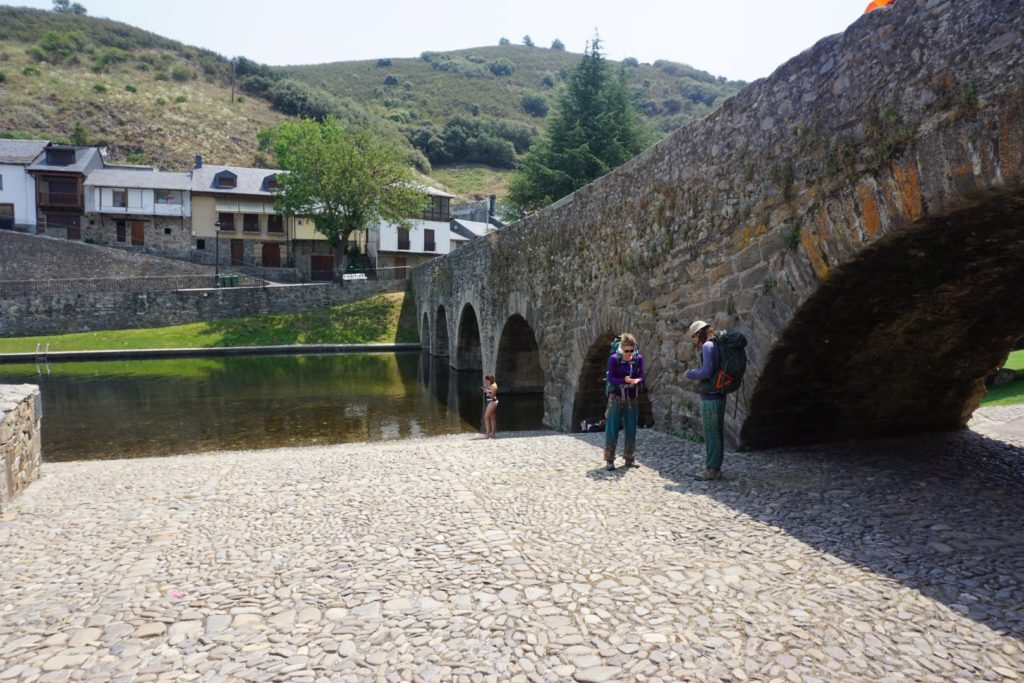 We’d love to stop here, as we’ve done some 20km today and it is now extremely hot.  But we’re broke, so we stride on out to Ponferrada, a much bigger town, in the hope of finding an ATM.

We pass beautiful modern villas guarded by BMWs and Range Rovers.  This is a wealthy town and something of a shock considering the apparent poverty of where we started this morning.

It’s only 6km to Ponferrada but it’s 2pm and it must be 40 deg C in the shade.  These 6 km are the hardest I’ve walked thus far.  It’s flat and the walking is easy but the heat is finishing me off. 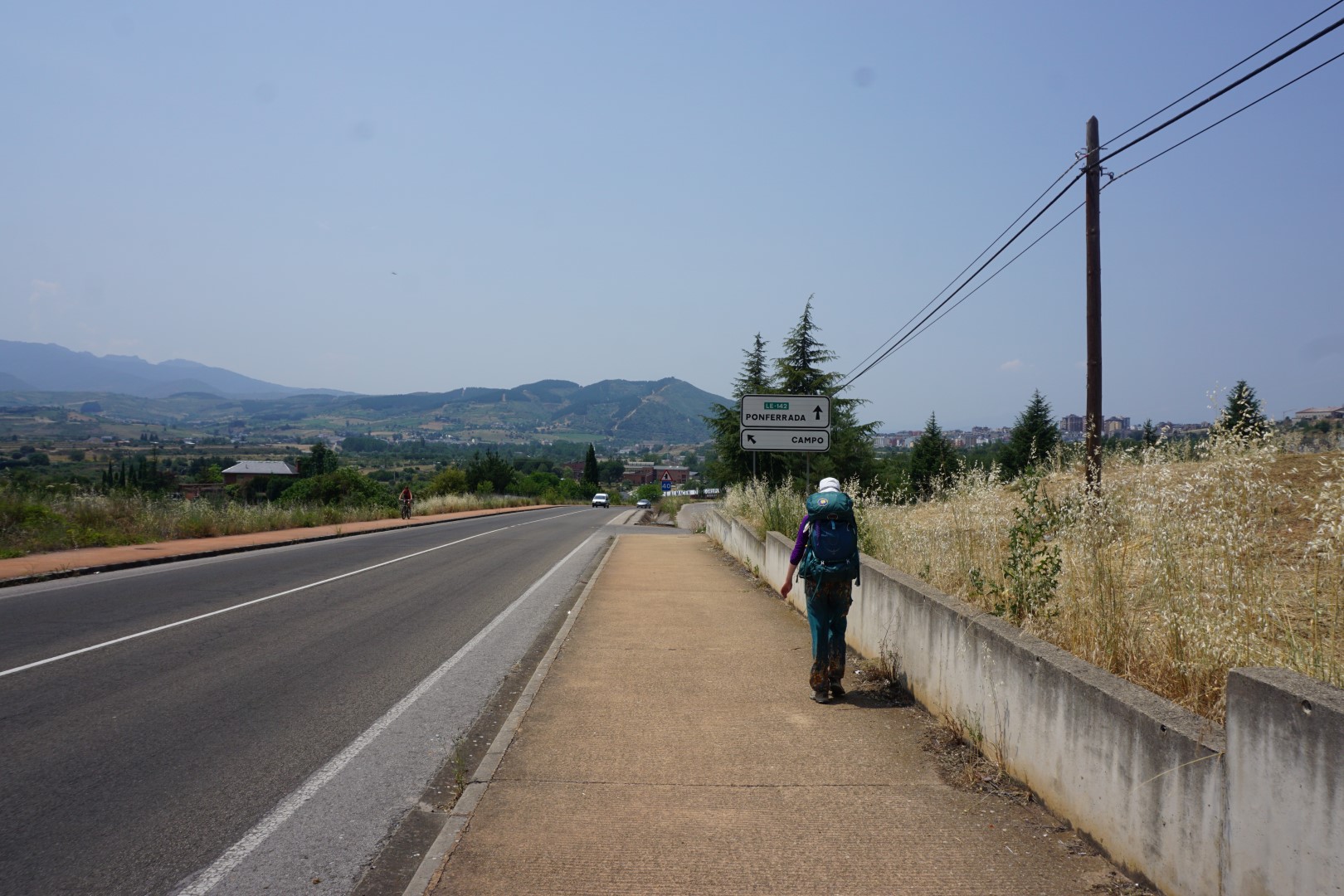 We were thinking of staying at another veggie albergue but when we finally found it we decided against it and carried on.

Choice #2 looked like a modern hotel and had thick glass and AIR-CONDITIONING!!! but was, sadly, full.

So we ended up at Albergue St Nicolas de Flue, a donativo.  A good choice, it was excellent.  We were in a 4 bed room with a lady from Mexico. 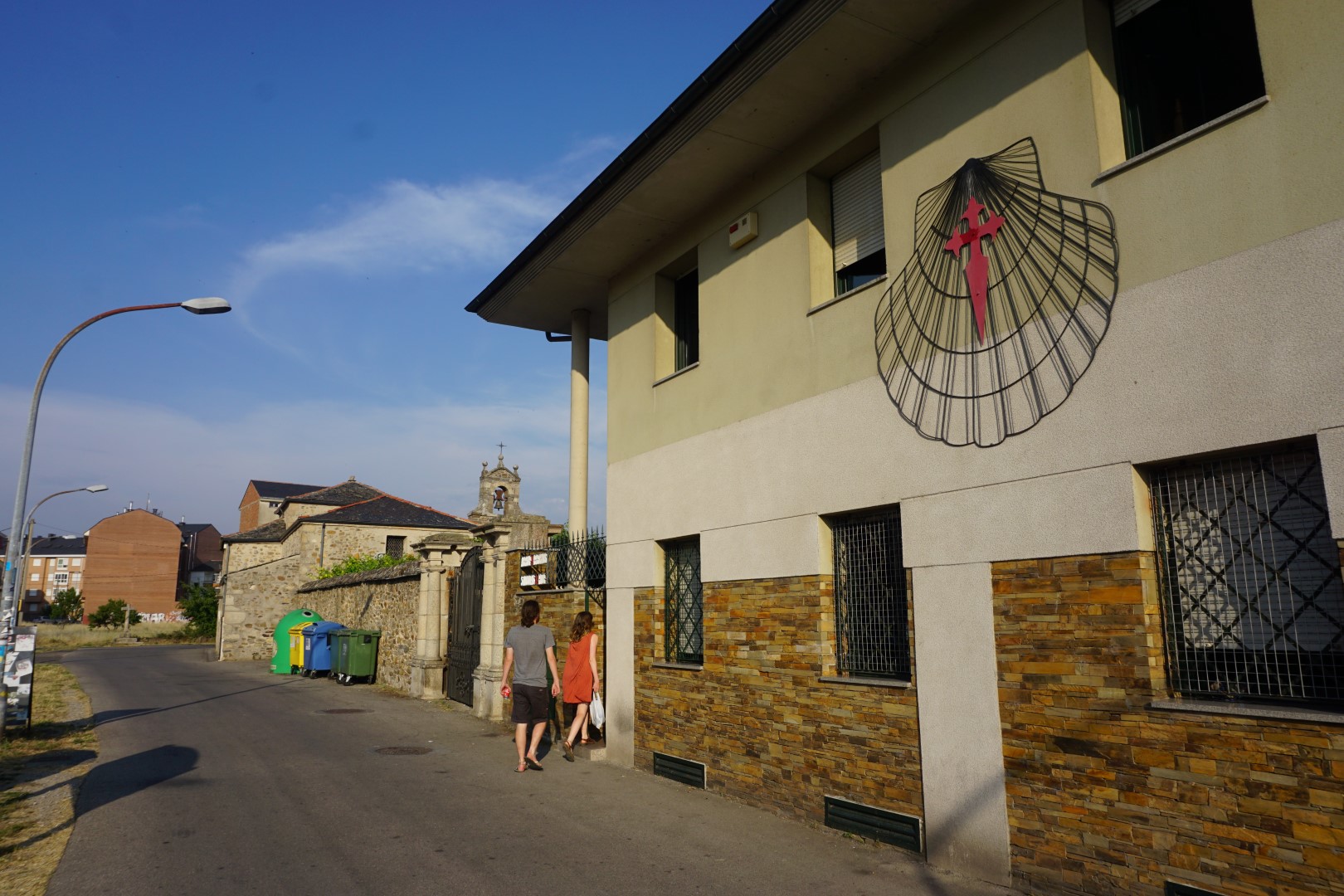 In retrospect we should have rested up and done as little as possible in an attempt to recover from the heat.  But, Ponferrada is a historic town so off we went to be tourists. 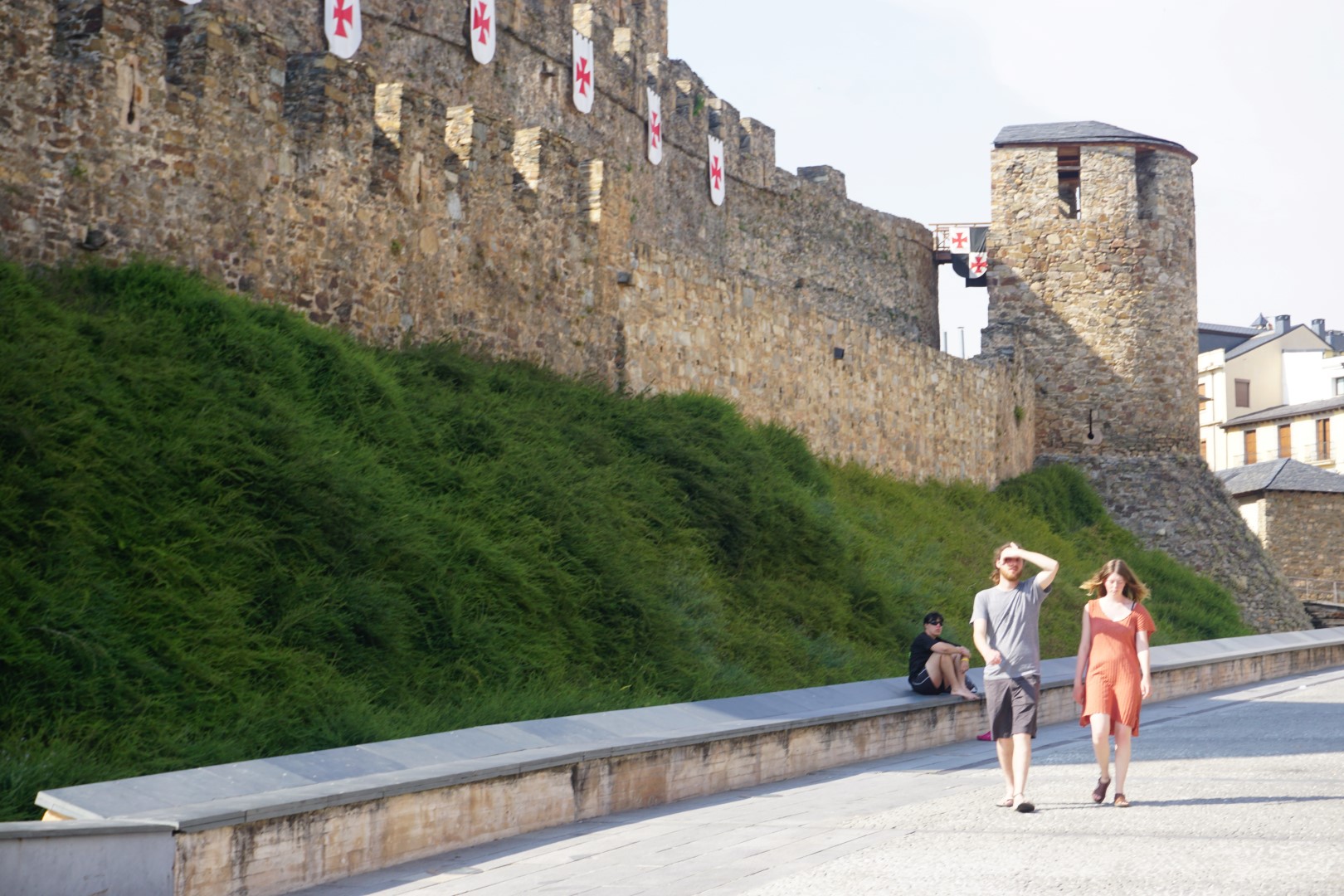 We pass a castle of some description but, frankly, we are all now delirous with the heat and I’m getting a little worried about myself.

We find an ATM, get some cash, and retire to a smoothie shop that has air-con, a great rarity.  We sit for as long as possible and try to make a plan through the heat haze in our brains. We eventually head next door to an excellent little cafe and eat lots of salty eggs and chips and drink lemonade.  By 7:30pm the heat has reduced a little and our heads are clearing.

We retire to the albergue where Jen finds a kitten to play with and H and I read books. 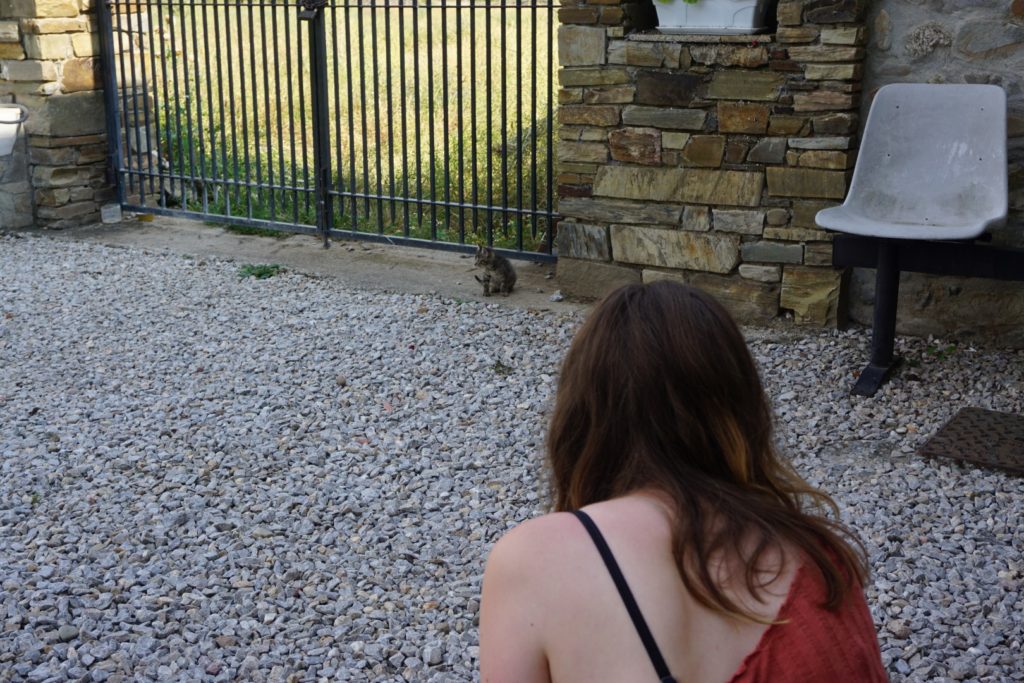 Today was dramatic.  La Cruz de Ferro was deeply affecting, the scenery was immense and the sun is still trying to kill us.