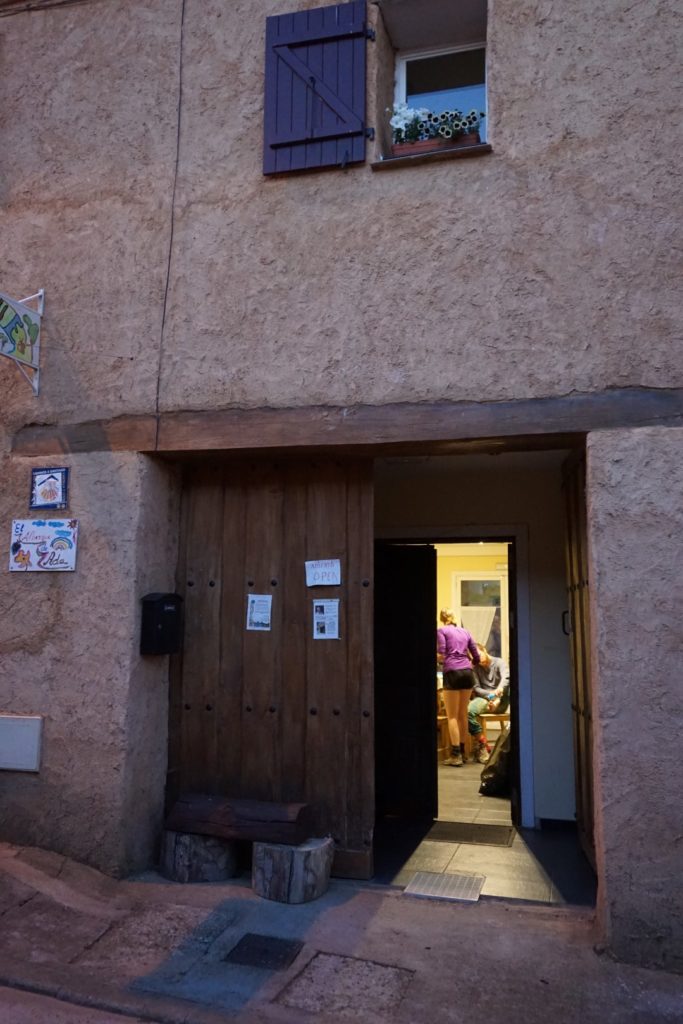 Rumour is that today is to be the hottest yet. Keen to get the 24k to Leon done before we melt. 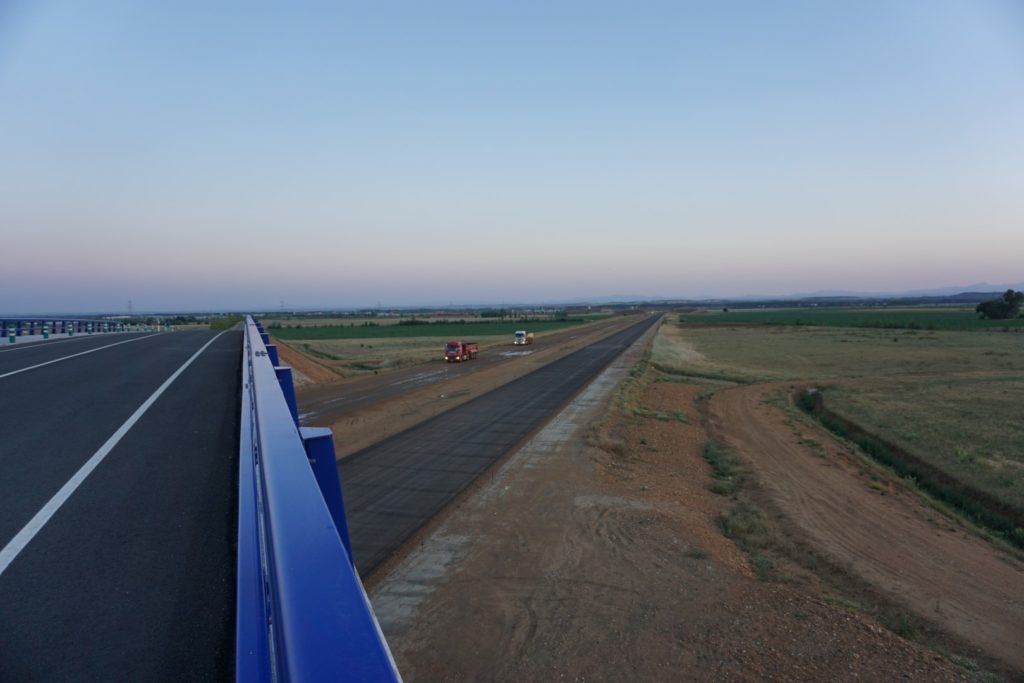 …and watch the construction vehicles come out from Leon. There are dozens of them. Every now and then a truck comes past spreading water to damp down the dust. 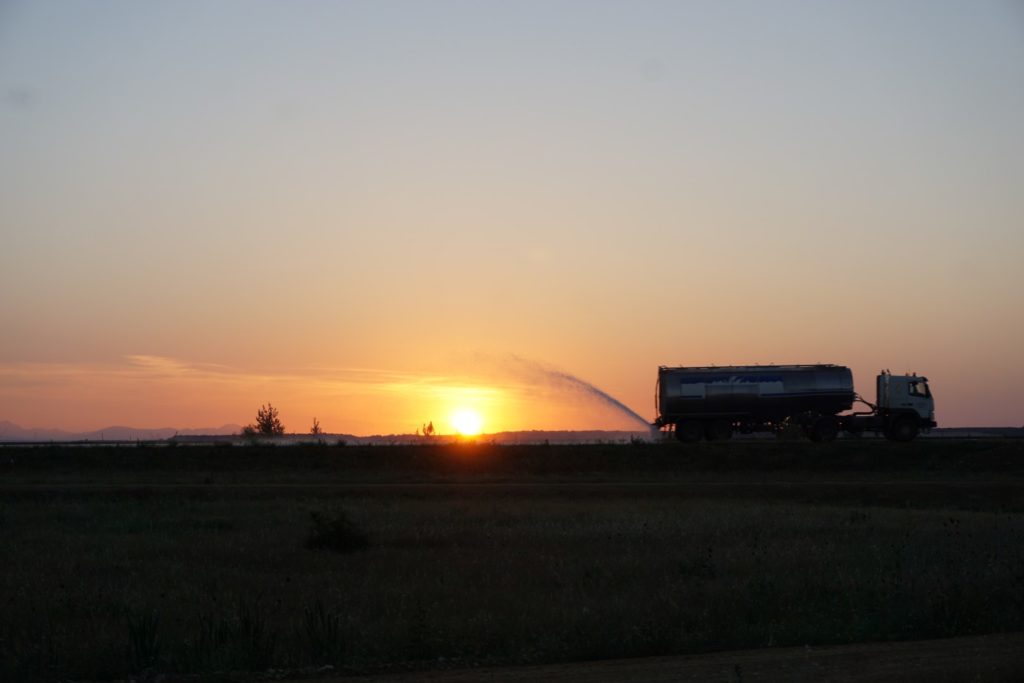 We’d run out of cash yesterday so the first requirement of the day was a cash machine. This we found in the village of Mansillas de las Mulas. Which is a bit of an ugly town. And, for the first time on the trip, we could find no open cafes. So now we had money but nowhere to spend it. We’d done 6k without breakfast and we were kept going by visions of strong coffee and tortillas. Eventually we found a tired old place on the main square and had strange cake for breakfast.

Thankfully the next small town had some excellent cafes so we were up and running.

Right, there’s no way to sugar coat this. Today’s walk is just plain boring. The entire day is spend walking alongside the N-120, a busy road with trucks and all sorts of things that aren’t fun if you’re a walker. 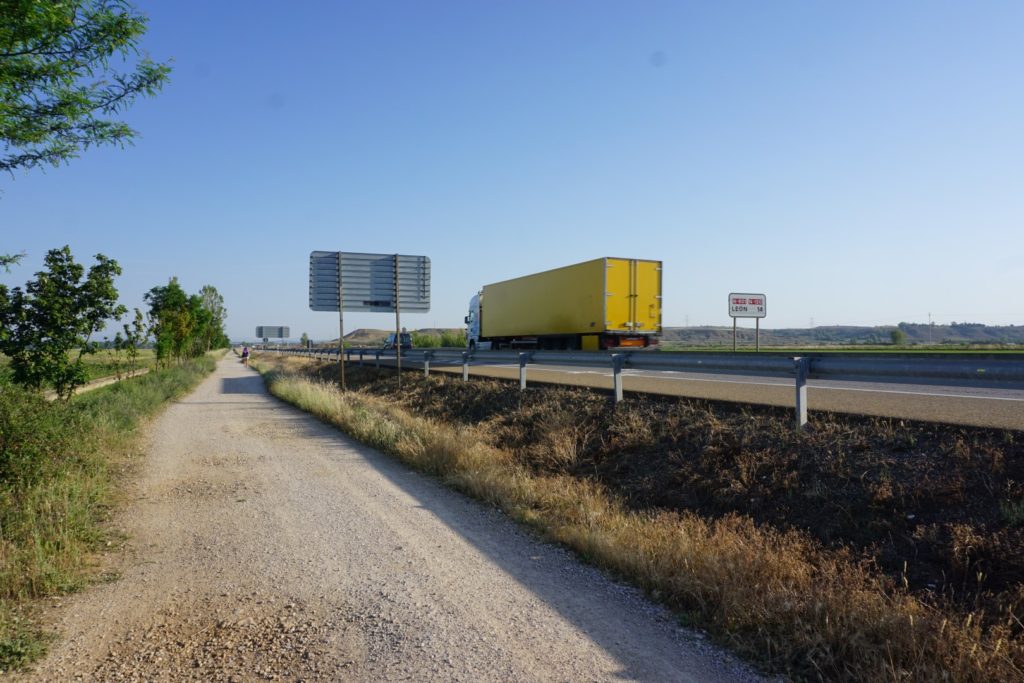 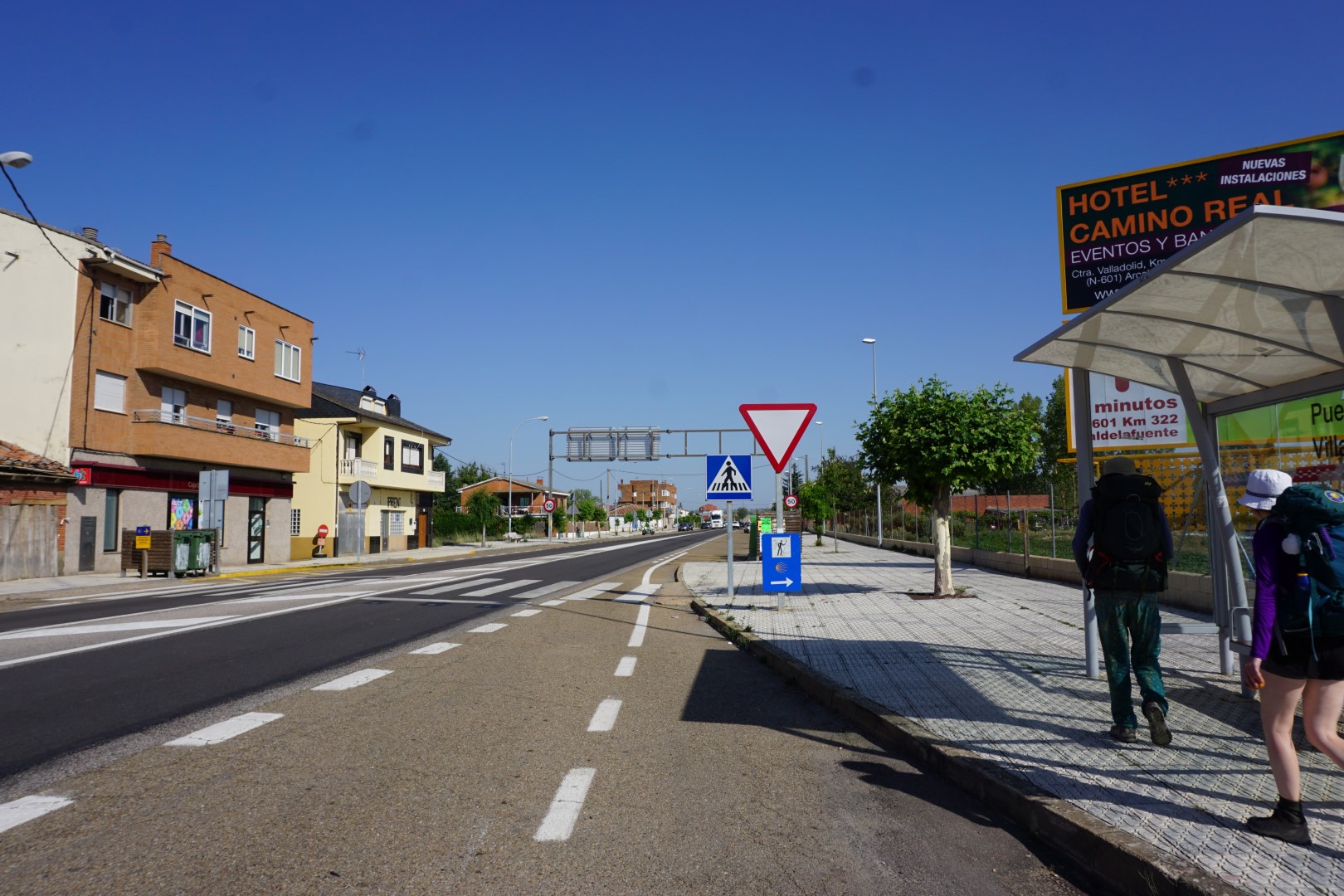 We decide on the topic of the day’s conversation. Let’s get an old truck and convert it for driving around the world. This proved a fruitful topic and the kilometres fairly flew by. 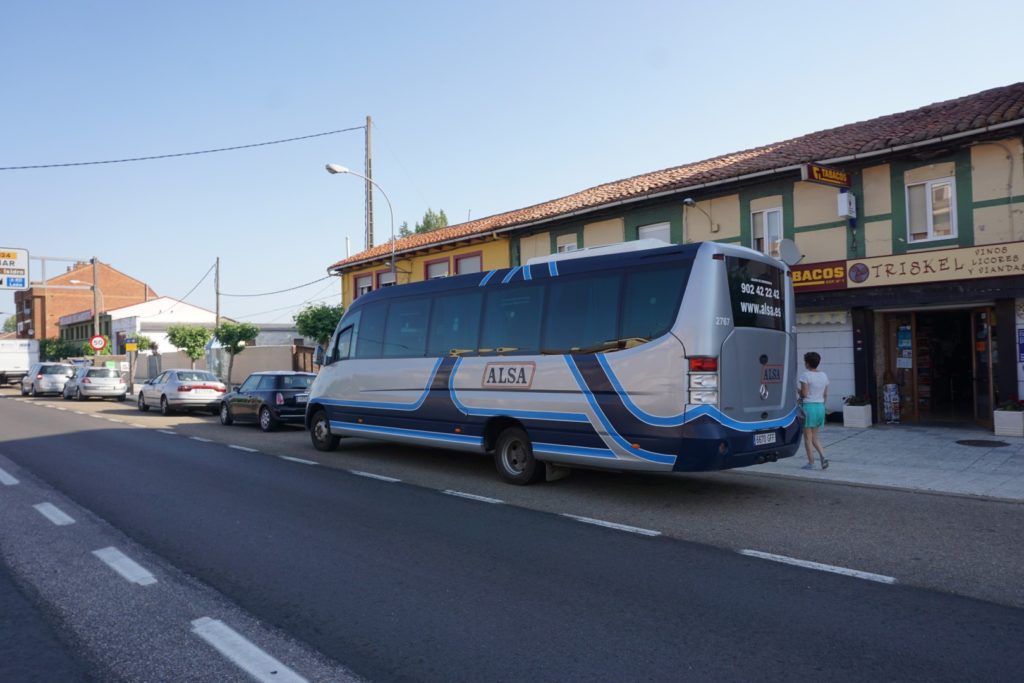 But as we got within a few km of Leon my feet were really suffering. Everything else was working fine, but my feet were falling apart. I was getting concerned.

I was greatly looking forward to our prebooked hotel in Leon. As with all major Spanish cities on the Camino the approach to Leon was long and hot and definitely a trudge. 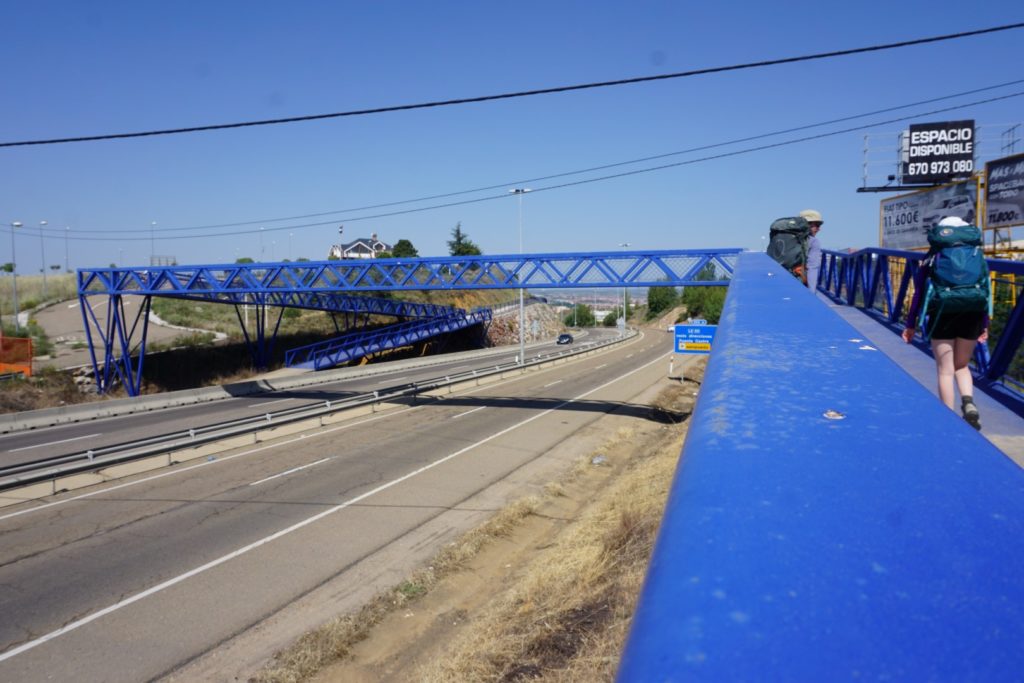 A nice moment was found as we approached the old city walls we came upon a table staffed by local volunteers handing out maps and boiled sweets. We made it into central Leon and our hotel around 1pm. 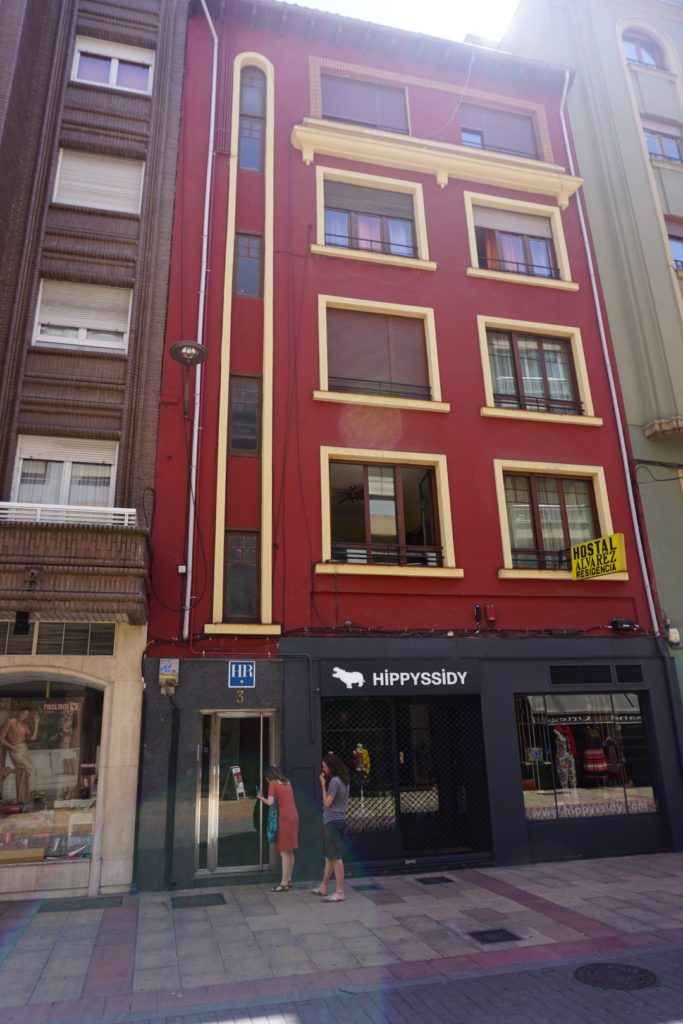 It was GLORIOUS to have our own rooms. I unpacked everything and deliberately made a mess as I showered and cleaned up.

We went for a small stroll around the cathedral but my feet were in such a state that every step hurt. So we retired to our rooms where the youngsters slept and the old man did techy things and sat with his feet up.

At 6 Jen did a blister removal operation on my feet and we limped out in Leon to find a pizza place that Jen remembers from her last visit, last year. We found it and had three enormous pizzas and several pints of Perrier.

We also made a plan. I’m getting properly concerned about my left foot and I think I need to rest up. So J and H will set off tomorrow to Villarreal de Mazarife on the optional (according to Brierley) ‘scenic route’. Which has the huge advantage of not running along the roadside. I would get on a bus to Hospital de Orbigo, about 30km along the trail. The plan is that on Sunday I’ll start walking again and do a short 15km day to Astoria where I’ll meet up with J and H.

Plan made, we went shopping for sunglasses and soap for Jen.

Albergues have a fairly strict 10pm shut-up policy. Unfortunately the Real World doesn’t and, as you have to have all the windows open in order not to melt, it took some time to get to sleep.

Distance covered, according to Brierley

Steve : I’ve been taking some video along the way and I thought I’d post a couple of examples.

Here’s some Slow TV of walking across the meseta

Spain is very fond of wind turbines (as am I). Here’s an early morning dance, also taken on the meseta…