Steve : A long walk out of Burgos, through the suburbs.  Today I’m trying my Merrell sandals.  Let’s see how they do. 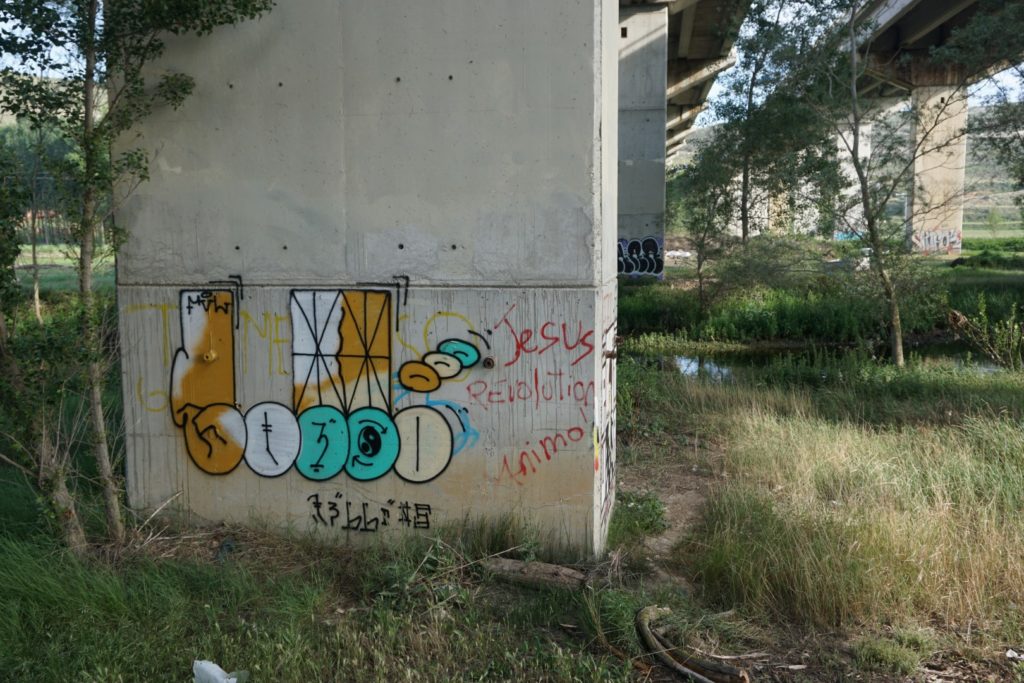 And then through Tarjados and Rabe and up onto the Meseta.  This place is magical… 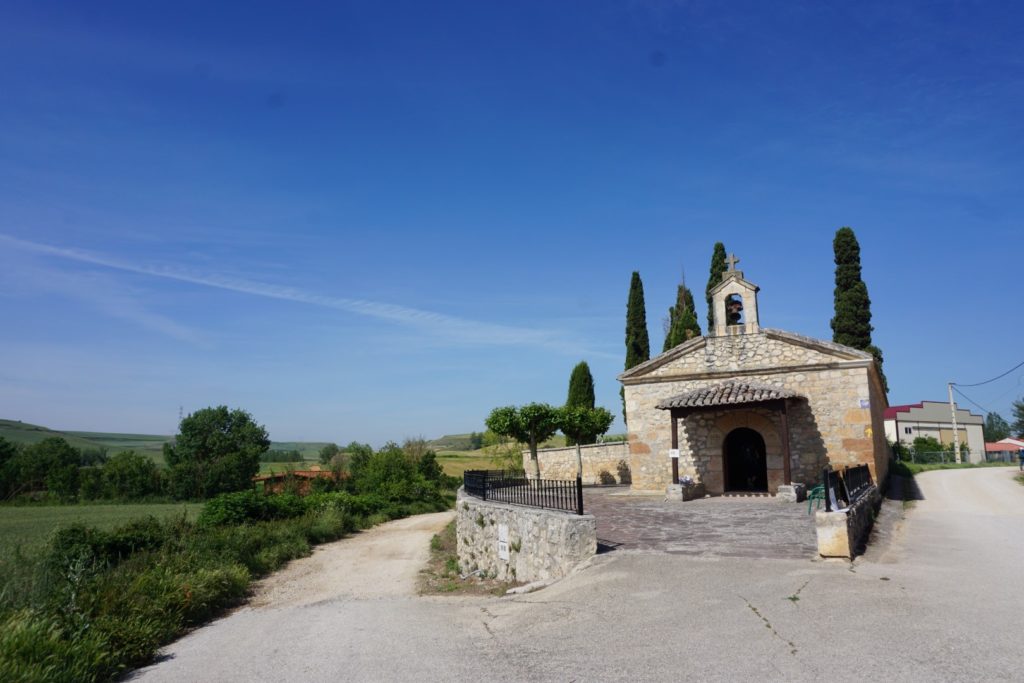 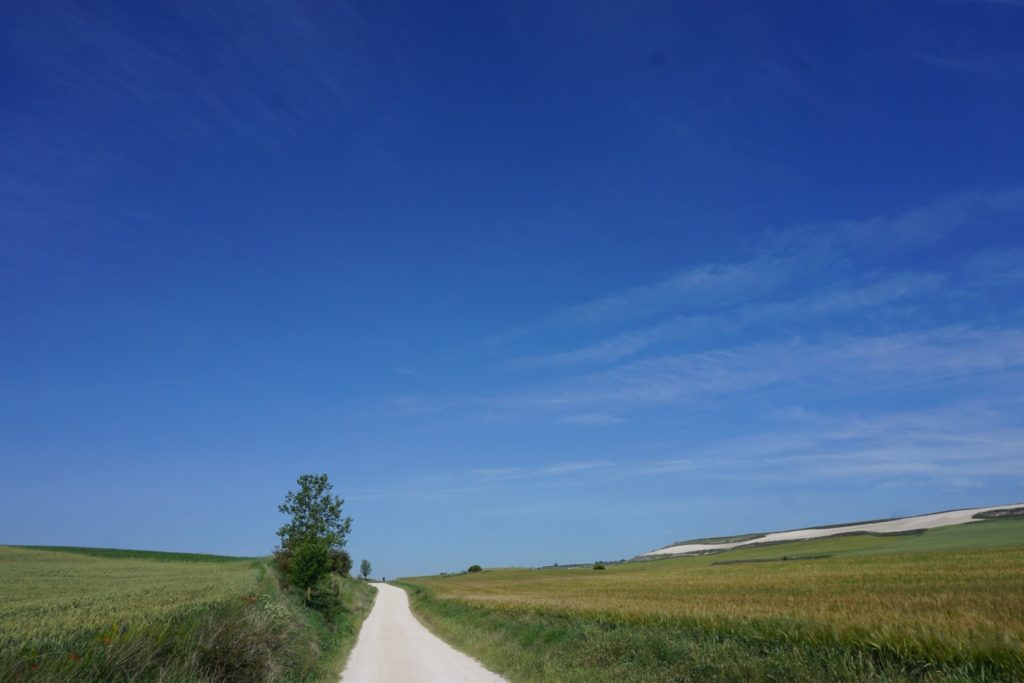 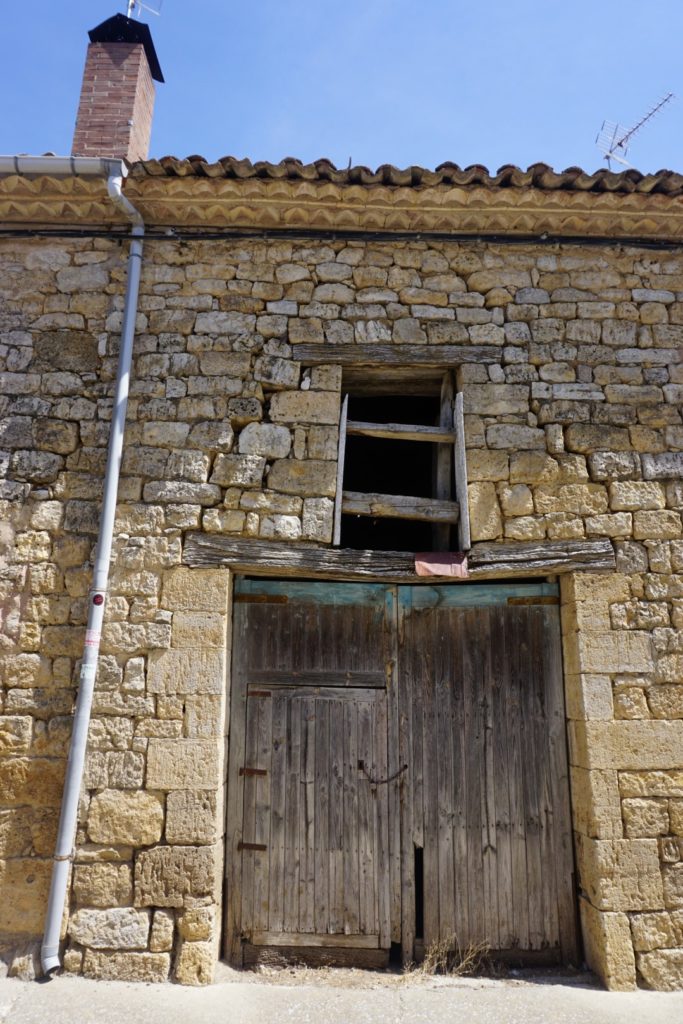 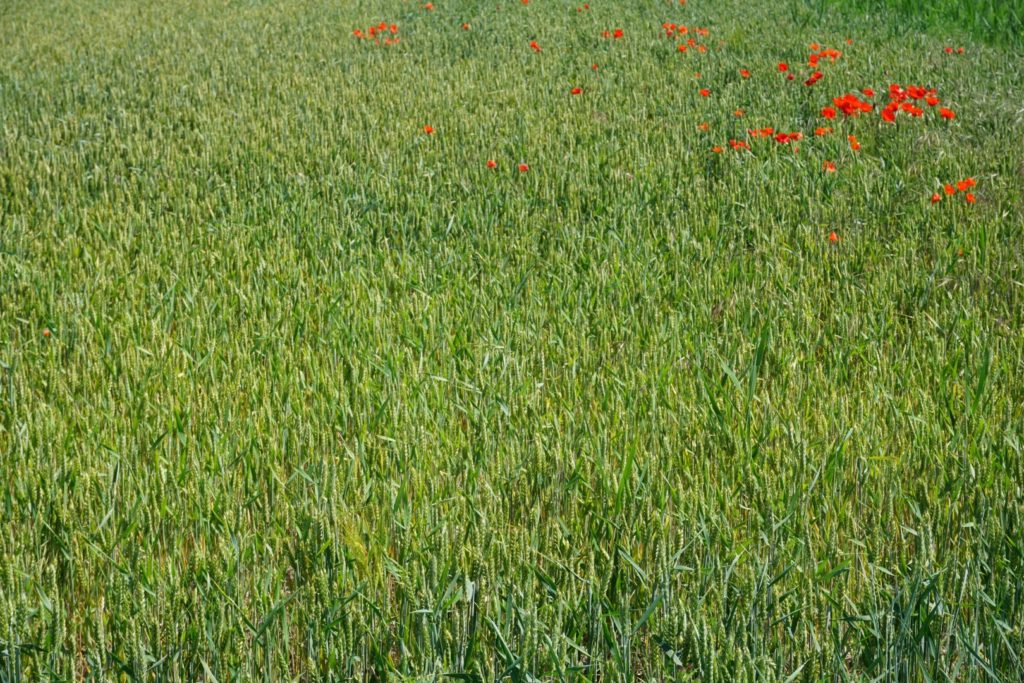 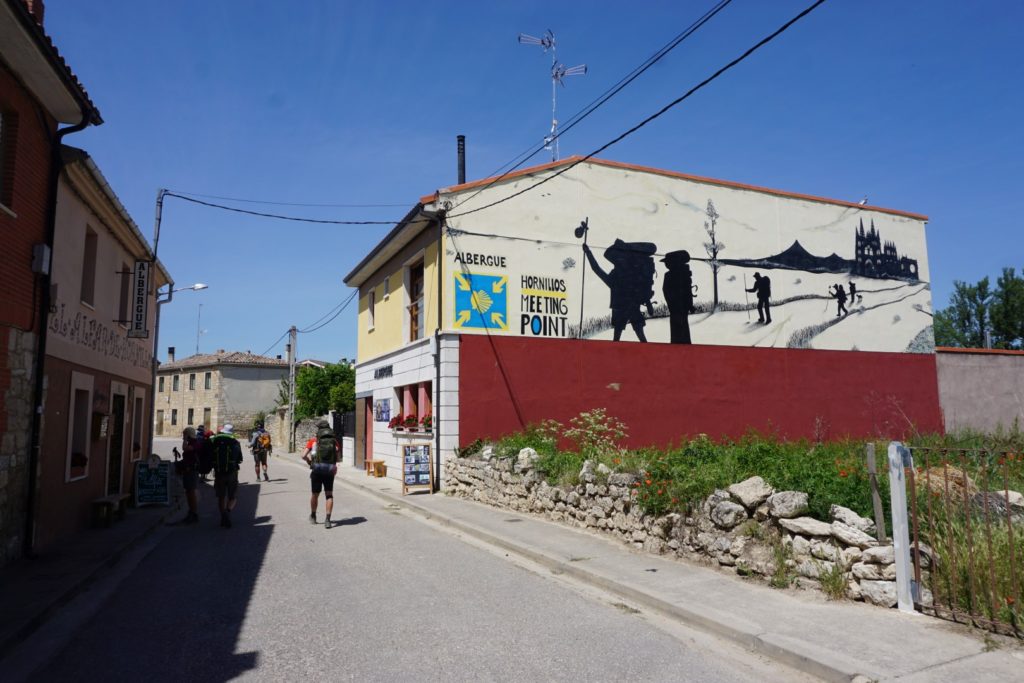 21 km done through the best countryside so far.  My feet survived a day in sandals.  All is well….

Steve : The Camino is supposed to be what you make it.  You do what you want in your way.  It’s your Camino.

That said – you want to do it ‘properly’, and ‘properly’ should not involve getting on a bus.  More on that later.

Past the route markers and through Azofra and Ciruena… 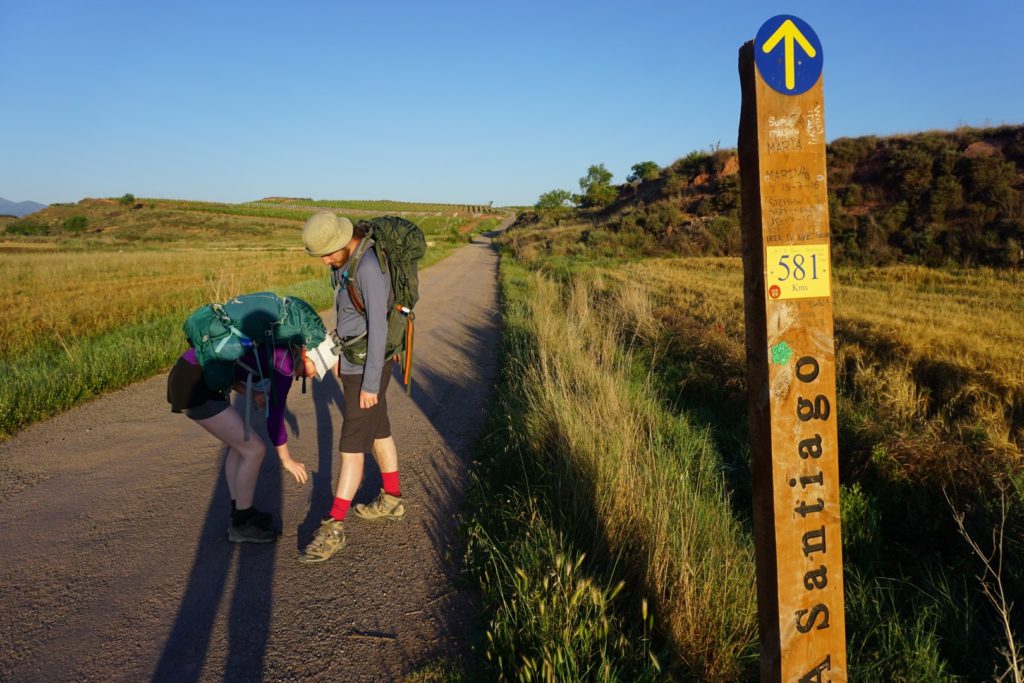 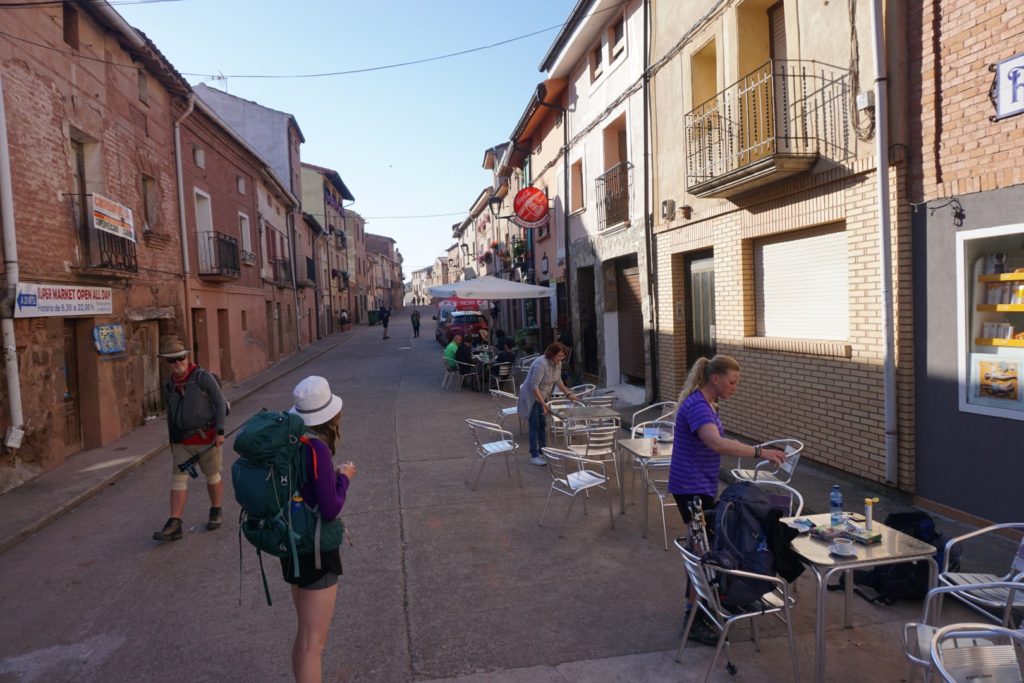 ..with the compulsory  breakfast stop of strong coffee, potato tortilla and an orange juice. 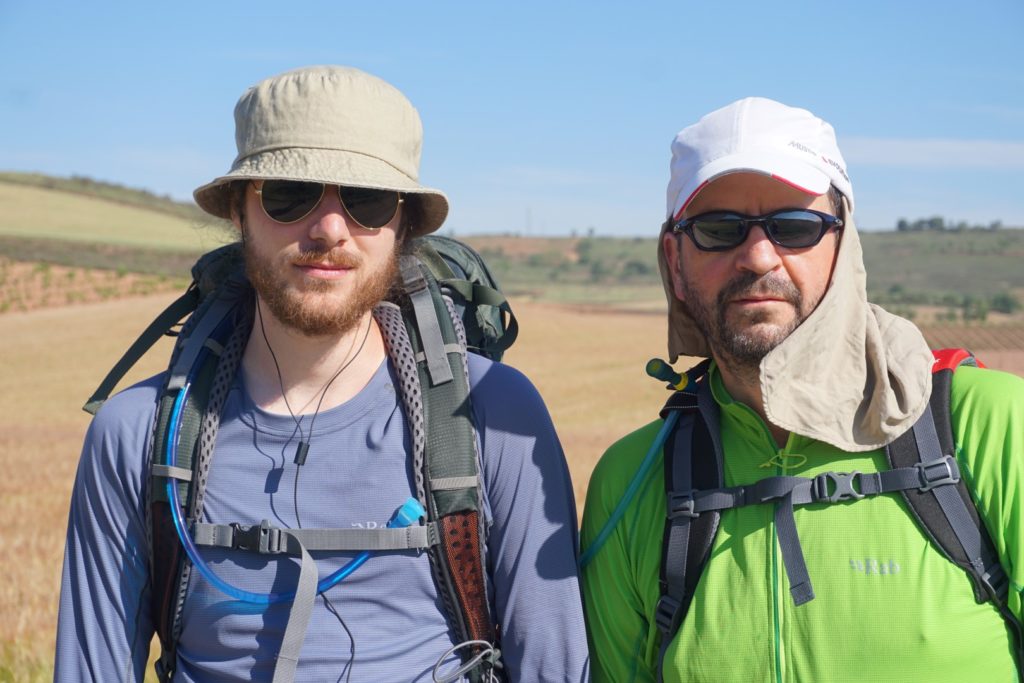 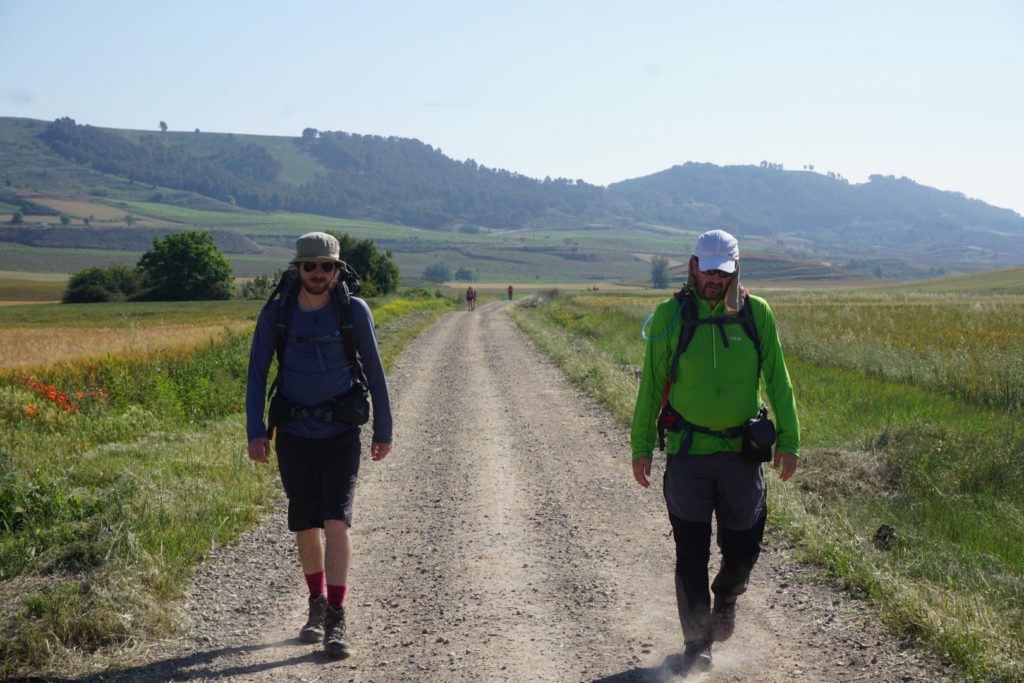 It was getting properly hot, at least for this Scotsman.  As a former skin cancer patient I always keep full covered, which I reckon is the best idea anyway.  At the end of this day H’s legs were traffic light red.

We arrived in Santo Domingo and had a crisis meeting.

We’d lost two days because of the British Airways IT failure. And our original Plan A required us to claw back a day at some point in the trip.  The idea was to take three 20-ish km days and do them in two 30-ish km slogs.  But our experience of the last few days has told us that 30 km is too much.

So, to make our flights on July 3rd, and to have something of a good time in Santiago (after all, the point of the exercise!) we decided on Plan E…

So that was our plan.  We got the bus and went to Burgos.  And we hope to make it to Finisterre.

I took no pictures of this sad departure from plan.

As the air-conditioned and completely splendid coach pulled out of Santo Domingo for the 70km trip to Burgos we were conflicted.  And rather startled at the speed of the bus! After all these days of being a pedestrian it was rather a shock to roar along the road – the pilgrim trail follows the main road for much of the trip – and pass all the Camino route markers.  In an hour we were there in Burgos. It felt like cheating.

We booked into the enormous municipal albergue.  Very modern and very splendid. And very cheap, 5 euros each.

Jen performed surgery on my feet, with sharp scissors and a safety pin that had been sterilised with a cigarette lighter that we’d bought for the occasion, plus a lot of tissue paper to catch what Jen refers to as ‘blister juice’.  I put on my sandals and felt grim.

Somewhere along the way Jen had picked up some bed bugs.  Jen greatly loves all kinds of animals but bed bugs aren’t in the approved list.  They bring out the screaming heebie-jeebies. So she hot-washed everything – clothes, sleeping bags, the lot. And wrapped her backpack in a couple of plastic bags to be left out in the sun.  The little beggars stood no chance.

Burgos has a truly magnificent cathedral.  The albergue is just up the street from it, so we took our broken feet for a small walk and went to see what we could see. 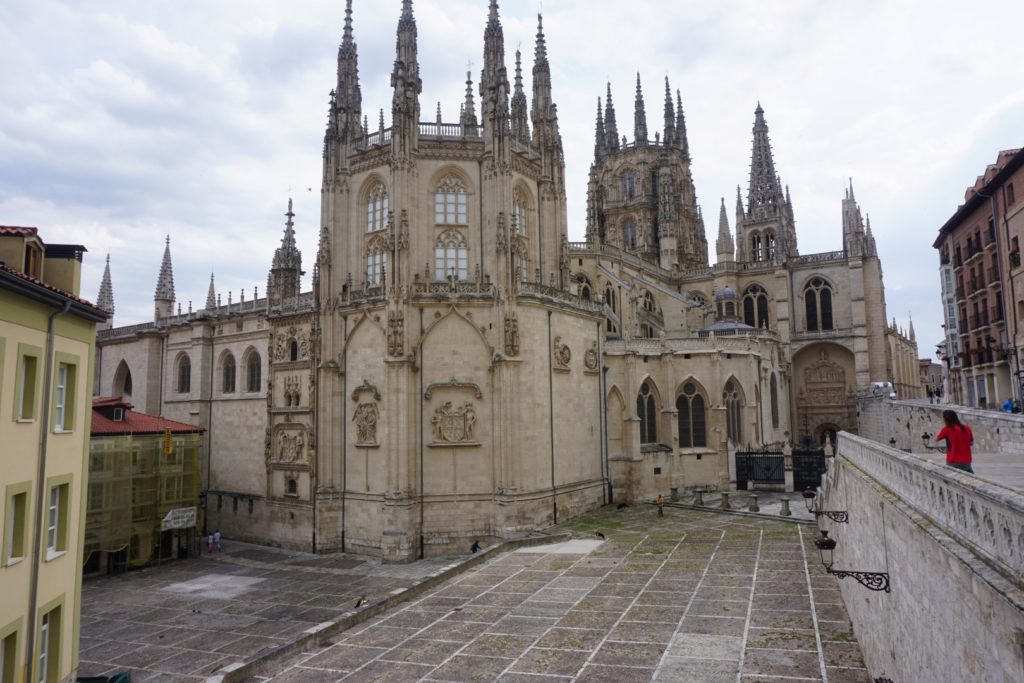 There was to be a pilgrim’s mass in the cathedral at 19:30, so we scrubbed up nice and went along.  This was a very different affair to Los Arcos. A real priest showed up and conducted the service. Being neither a Catholic nor a Spanish speaker I didn’t really have a clue what was going on but it was nice to watch other pilgrims for whom this was clearly a meaningful experience.

After that we found a restaurant that had a good vegetarian selection and we splurged.  J and I continued our discussion on liturgy and authenticity.  Whereas I rather like the Burgos pilgrim’s mass, she thought it was totally lacking in sincerity.

Maybe Jen will fill us in on her ideas on ritual and religion at some point. 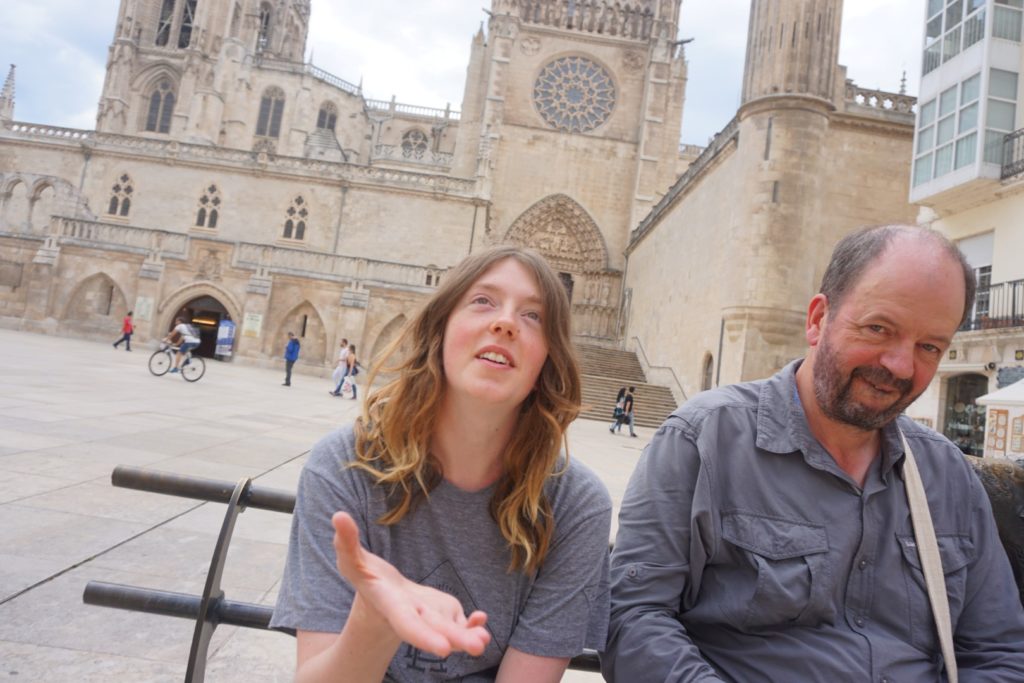 Back to the albergue, just in time to miss a thunderstorm.

A few words of advice….

Bus trip removes, according to Brierley, 72.7 km and 3 days of walking.