Steve : In spite of the previous day’s sog-fest, we were up…

On the outskirts of Estella is the village of Ayegui which has two things going for it.  Number #1 is the ‘100km’ marker.  Yeah!

Number #2 is the wine fountain.  Yes, indeed. A fountain of wine…

Check it out for yourself. 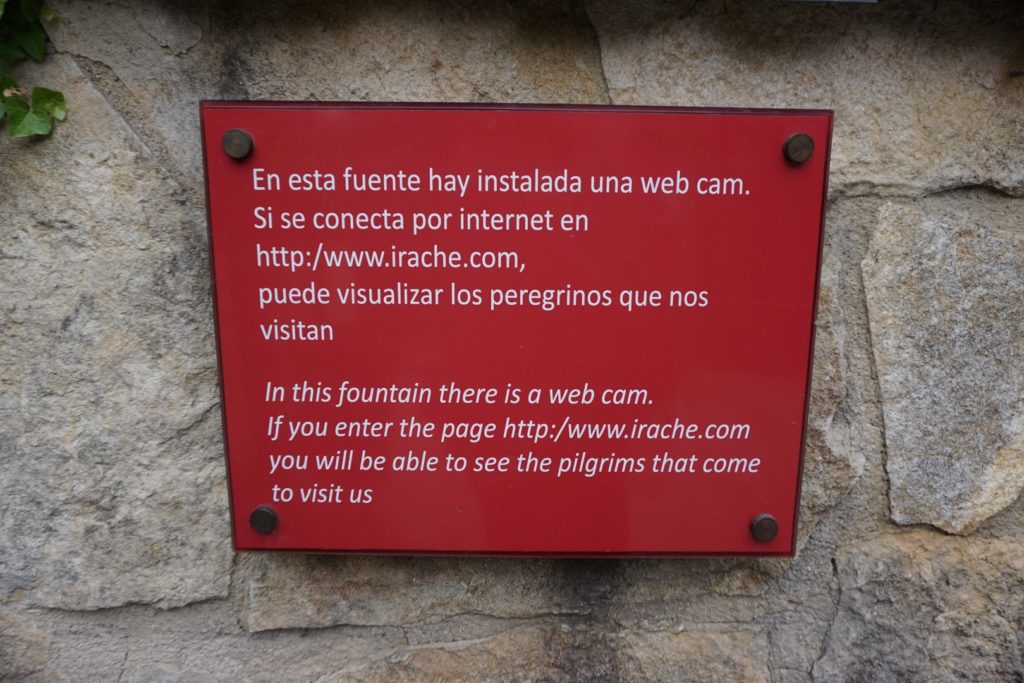 The weather was still a bit dreich (a quality Scottish word – look it up) but the panoramas raised our spirits. 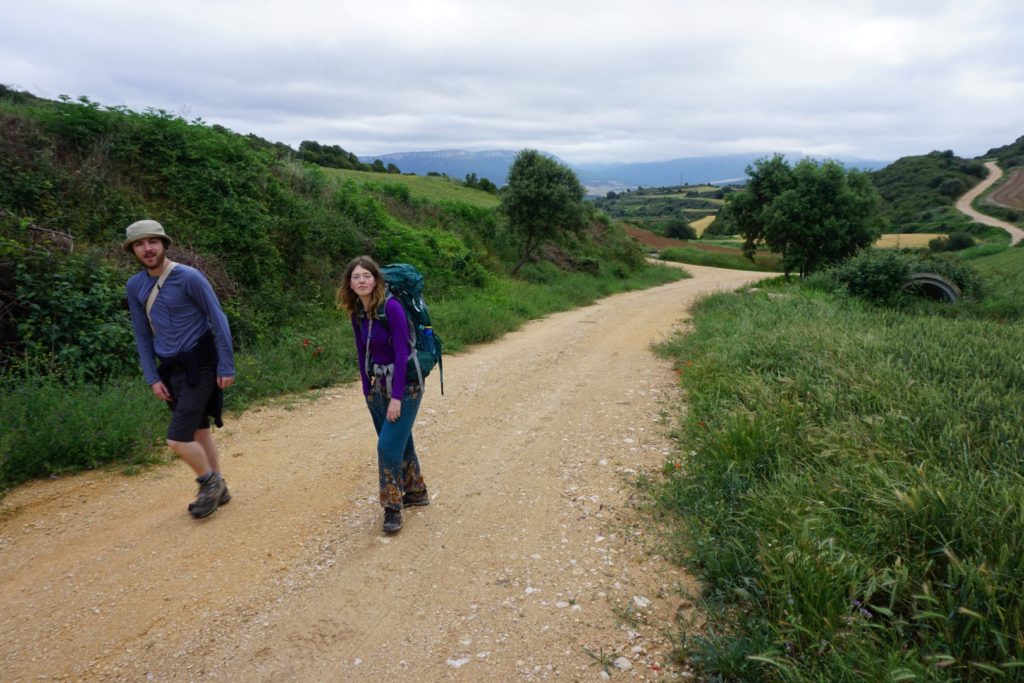 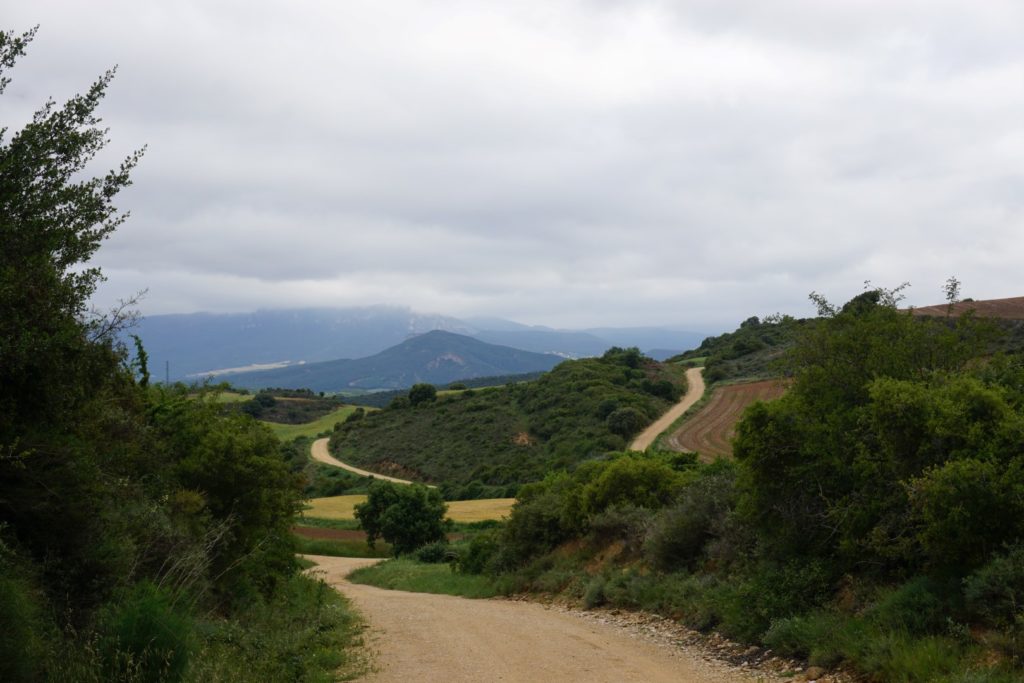 And then the sun came out and the perfect Spanish landscape revealed itself. 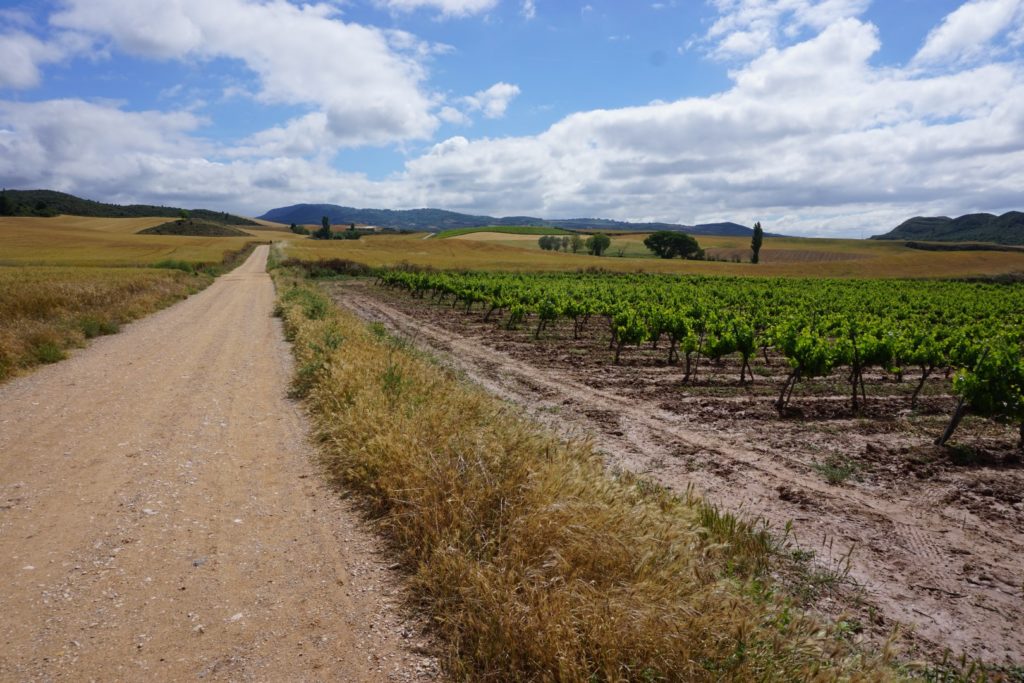 We rounded a corner and came upon a orange juice vendor.  He was playing aged rock music very loud. The slightly surreal combination of Steppenwolf ‘get your motor running, head out on the highway’ and the slow pace of the actual trail was duly noted.  We head-banged with AC/DC as we drank our orange juice – freshly squeezed from actual oranges. 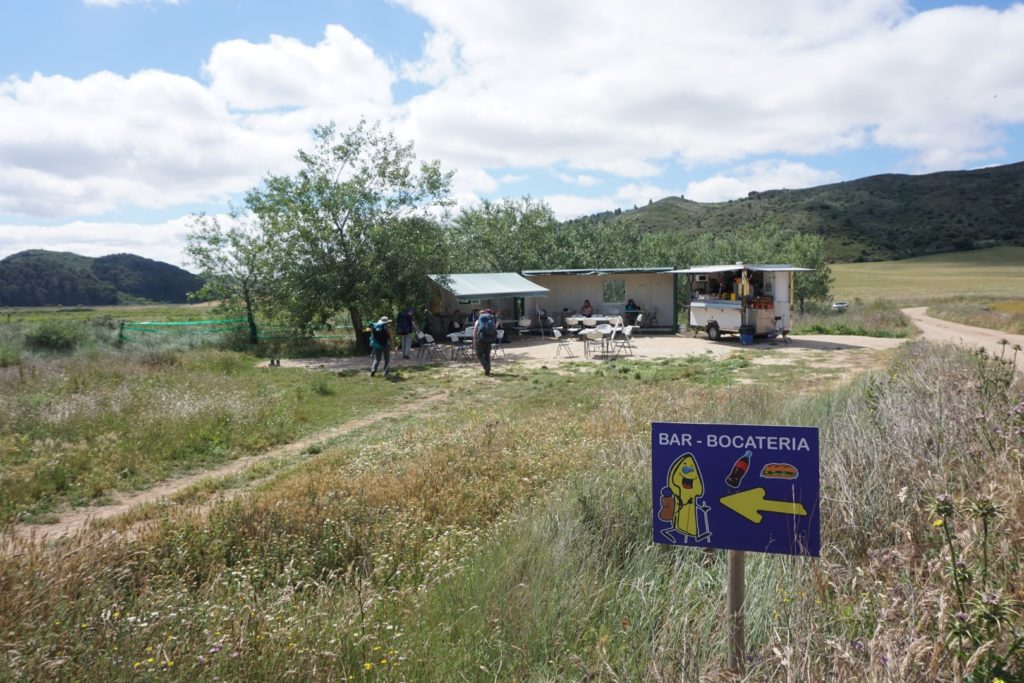 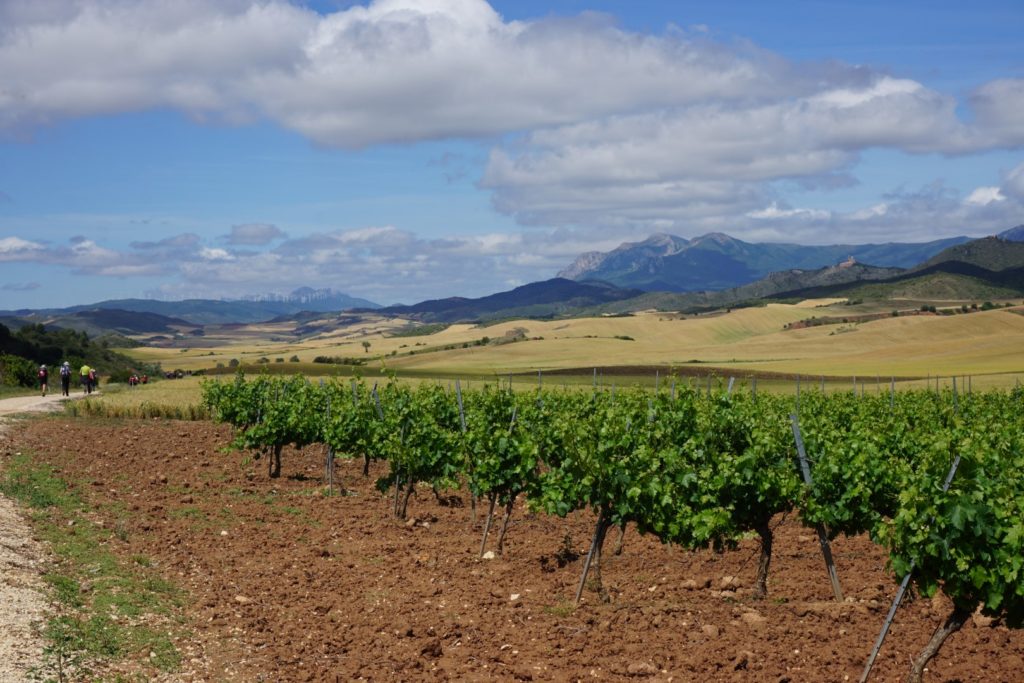 We are getting closer to Spanish wine country and the vines are more frequent.

We roll into Los Arcos mid-afternoon. Jen remembers this from last year and the Albergue La Fuente came highly recommended. 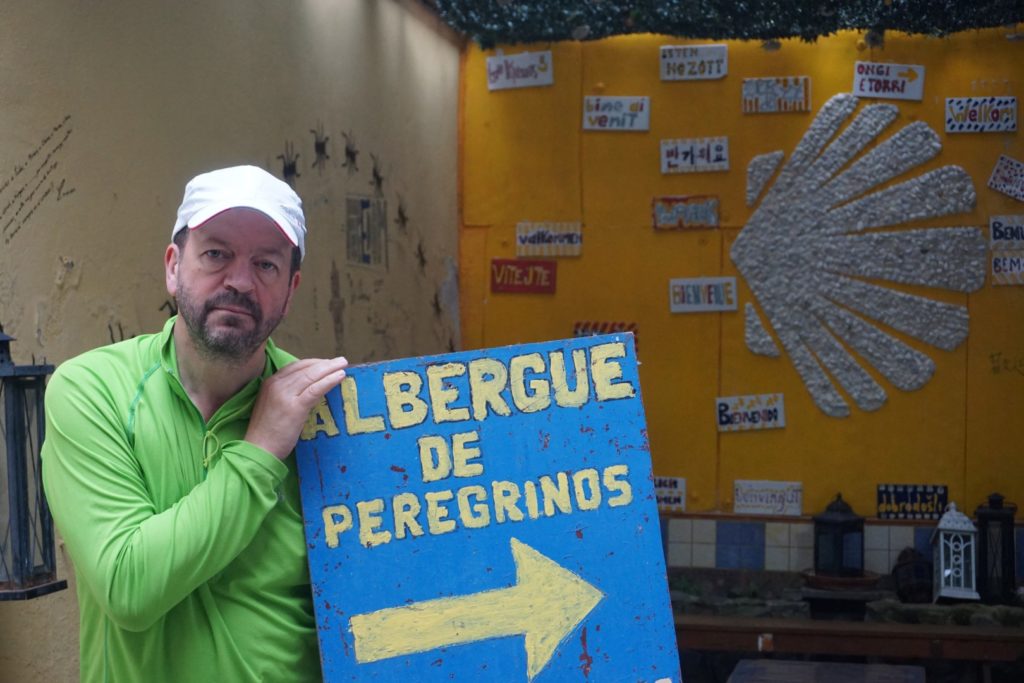 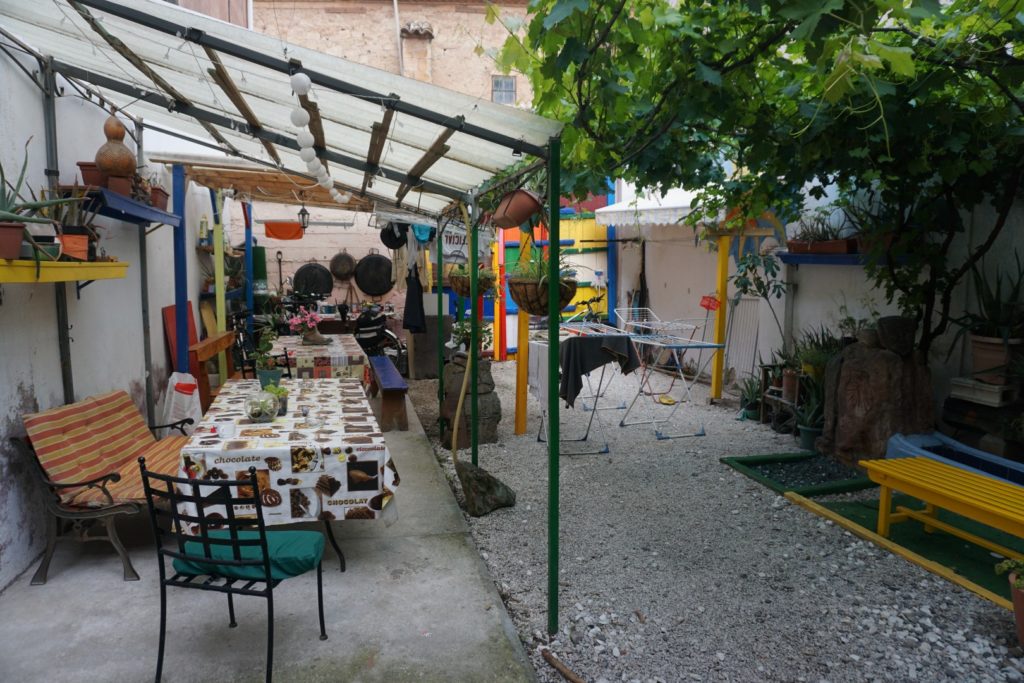 In the town square we had a “Who looks coolest in Hamish’s Ray-Bans?” competition. 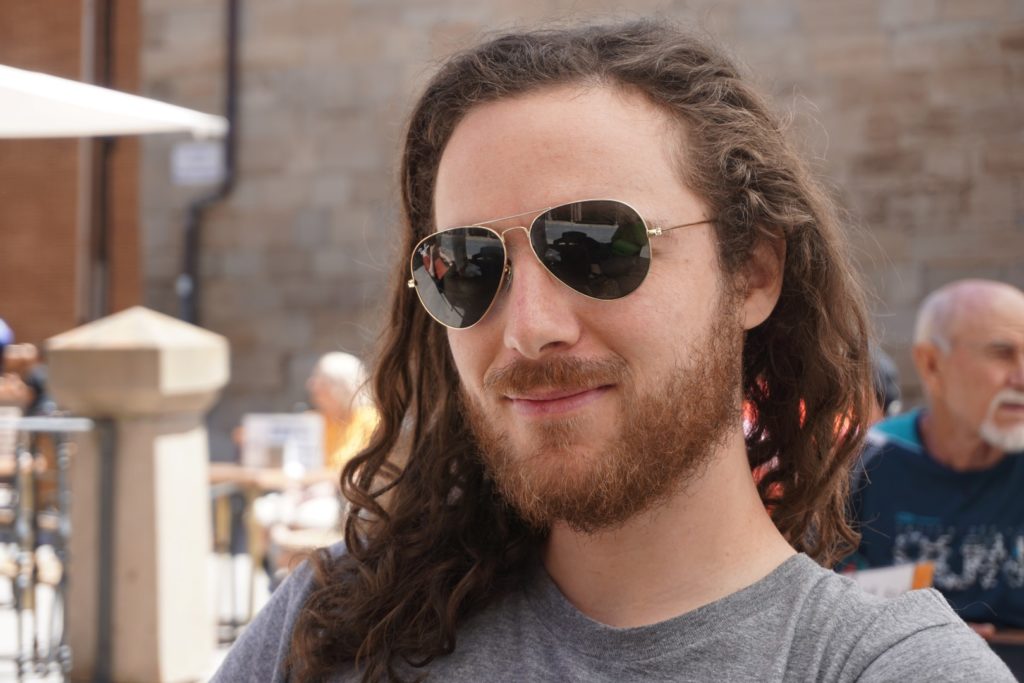 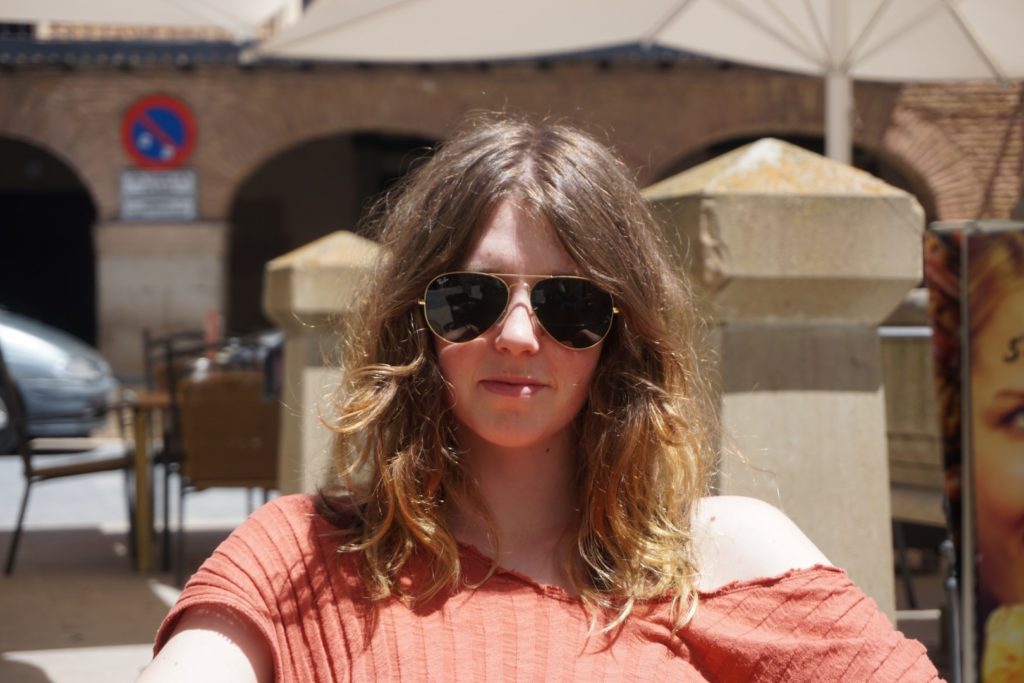 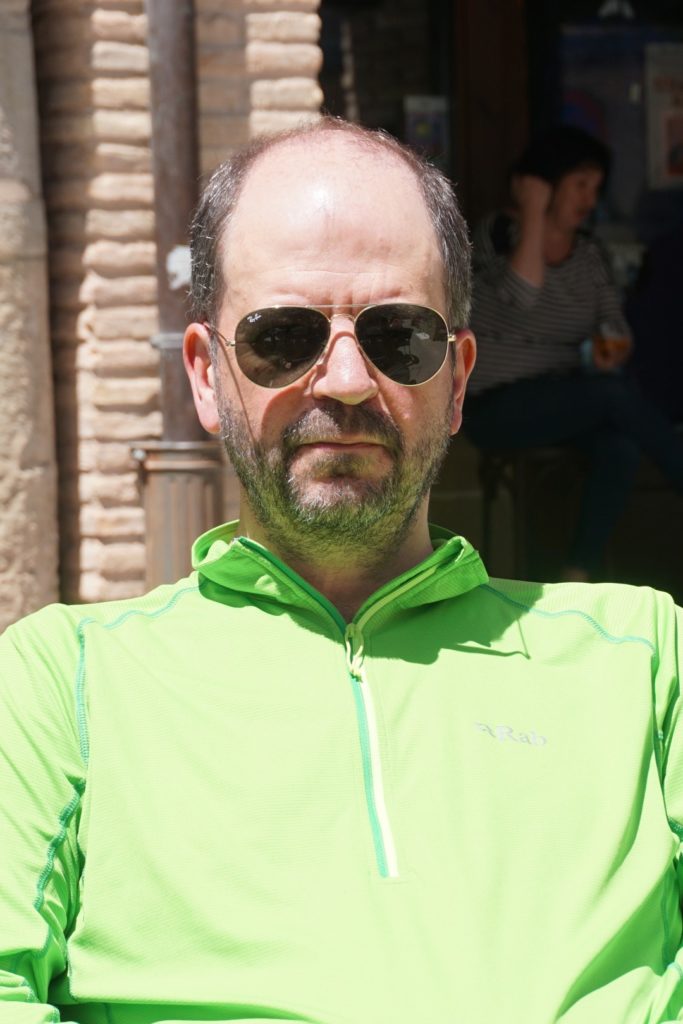 No contest, if you ask me…

The Camino is a real Catholic pilgrimage, through a country with a long and strong Catholic tradition. In the town square photo you can see the Church of Santa Maria. There was to be a pilgrim mass at 8 pm and we slipped in to the church in good time.

The overwhelming first impression of these small village churches in the extravagance of the altar pieces.  The contrast between this… 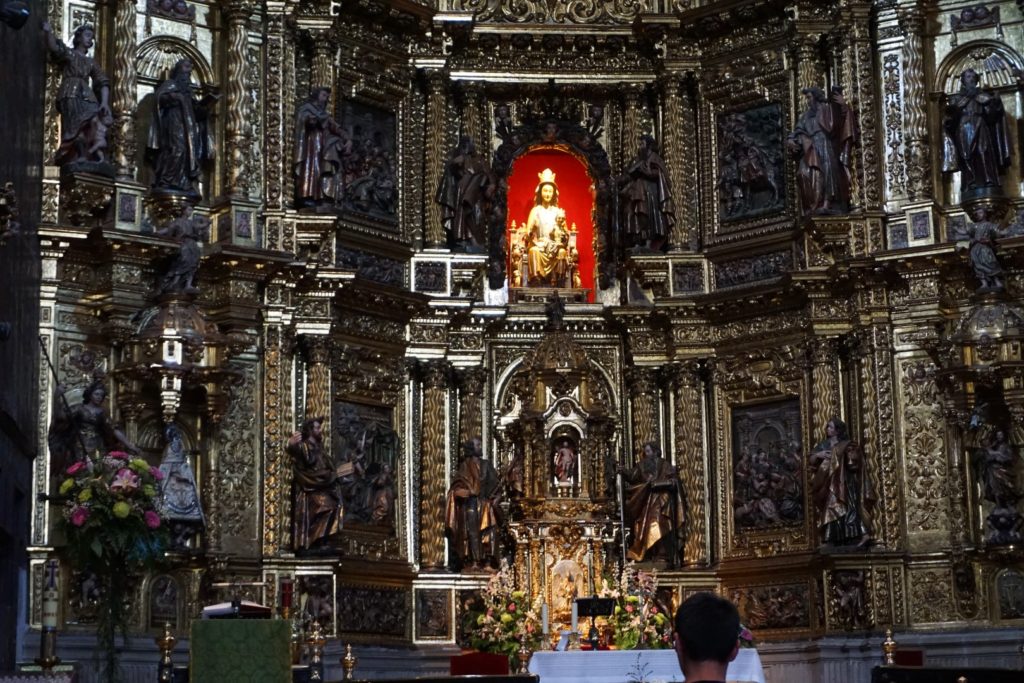 and the rather austere village architecture is marked.

We’re not Catholics (S and J are Christians, H is ??) and we weren’t quite sure what to expect. We thought the mass started at 7pm so we were sitting in the beautiful church for around an hour before things started to happen. An elderly lady was moving things around and opening and closing various sections of the altar area. A few more locals of advanced years ambled in and then at 8pm recorded voices came over the speaker system. For 30 mins or so there was a recorded ‘call and response’ – our Spanish isn’t good enough to interpret the meaning. But the surprise to me was that the whole thing was pre-recorded.

I don’t know what I make of this. I’m well aware (being both a Christian and a scientist) that there are those who would side with the Pink Floyd lyric

And far away, across the fields
The tolling of the iron bell
Calls the faithful to their knees
To hear the softly spoken magic spells.

I understand the power of words, and I understand the purpose of liturgy. The extreme form of liturgy in this church is not my cup of tea (maybe, as the Camino progresses and wifi permits I’ll elaborate on my own theology) and I wouldn’t like that in my church.

I recall many years ago reading a Clive James article in The Observer about some TV documentary on Lourdes. The programme was rather sniffy about the tourist tat often to be found side by side with some important religious place. But, says James, “objections to Virgin Mary holy water bottles are objections to the universality of the faith”. It seemed clear to this onlooker that the elderly audience were clearly getting some benefit from this peculiar service.  Maybe Clive James’ comments apply to this case, too.

What exactly is the purpose of the ritual of of Catholic Mass? Are the words the important thing? Do they, in themselves, serve some purpose?  If so, then the fact they are recorded is collective culture where a recording of emotions is a good-enough stand-in for the real thing.

I own hundreds of LPs (yes, I’m old…) and thousands of CDs and have access to the infinity of internet music.  If listening to the Afro-Celt Sound System play live in Glasgow is the ‘real thing’, then my complete CD collection of their works is a good-enough replacement for those occasions (99.9% of the time) when such a real interaction is impossible.

In which case you could say that the recorded Mass is functionally the same as a recording of your favourite piece of music?

Meanwhile back on the Camino…

Jen made us dinner in the albergue kitchen.  We marvelled at a group of Koreans (about 12 of them) who were cooking up a storm every night in a whirlwind of food and efficiency. 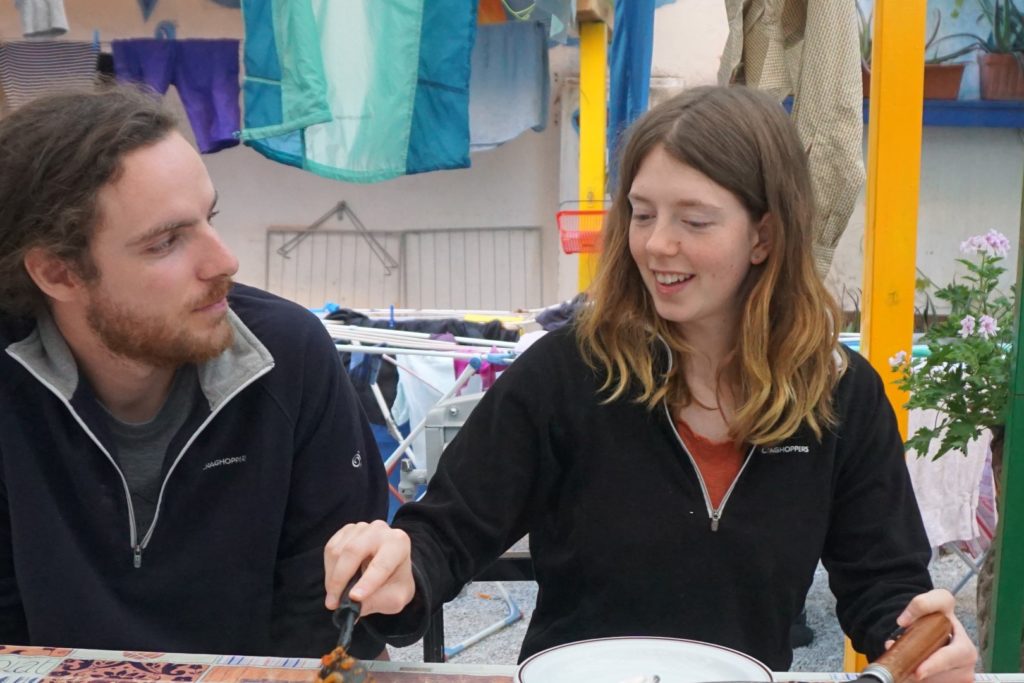