Steve : Up and out from Ponferrada at 6am. Good nights sleep, very tired after yesterday We had a small room with just four people in it and no snorers. Bliss.

Jen has discovered a kitten that lives in the bushes of the albergue.

She went to the supermarket last night and bought tuna and lactose-free milk. She fed the kitten this morning and put the rest in the fridge with a note to future peregrinos giving instructions as to where to leave the food. You can be sure that the future peregrinos would oblige.

Ponferrada at 6am is quite picturesque.

We pass a castle which seems to have something to do with The Knights Templar. And here we have an example of the Camino bubble. We are passing though Spain at a very slow speed and we should be able to take part in the culture of the towns through which we pass. But we seldom do. The life of the peregrino is so focused on getting from A to B and then recovering from that effort. The towns through which we pass are nothing other than placeholders on a map. Everything is about getting to the albergue as soon as possible to get out of the infernal sun, or at least that’s the case for me.

If I were to walk this way again, and I suspect I will, I would walk more slowly and at a cooler time of year. Walk 15k rather than 25, and stop off to actually see something. I would get out of the pilgrim bubble.

But, we head on out of town along a very minor road according to the map. The minor road was, sadly, very busy and we spent a long time just avoiding cars.

Jen has a sore leg and I’m struggling to recover from the heat exhaustion of yesterday. It is a difficult walk. At one point Jen’s leg is giving her such trouble that we try and call a taxi for her, but we give up in frustration when we cannot make our location clear to the taxi service. Our Spanish isn’t good enough. So she trudges on.

The landscape is changing. There are vineyards on all sides and it’s getting hilly.

We walk through some woods and come upon a popup cafe with a large dog, whom Jen befriends.

Jen and I are cross! My muscles hurt from yesterday. The big descent from La Cruz de Ferro was fine. The path was rough but it was basically the same as a descent from a Scottish hill. It was the 6k along the roadside from Molinaseca to Ponferrada in the 35 deg C heat that did me in.

We have a pasta lunch in Cacabelos and trek out up the hill to Pieros. We are booked in to another hippy albergue, El Serbal y La Luna, from the Vegetarian Way, one that Jen stayed in last year. 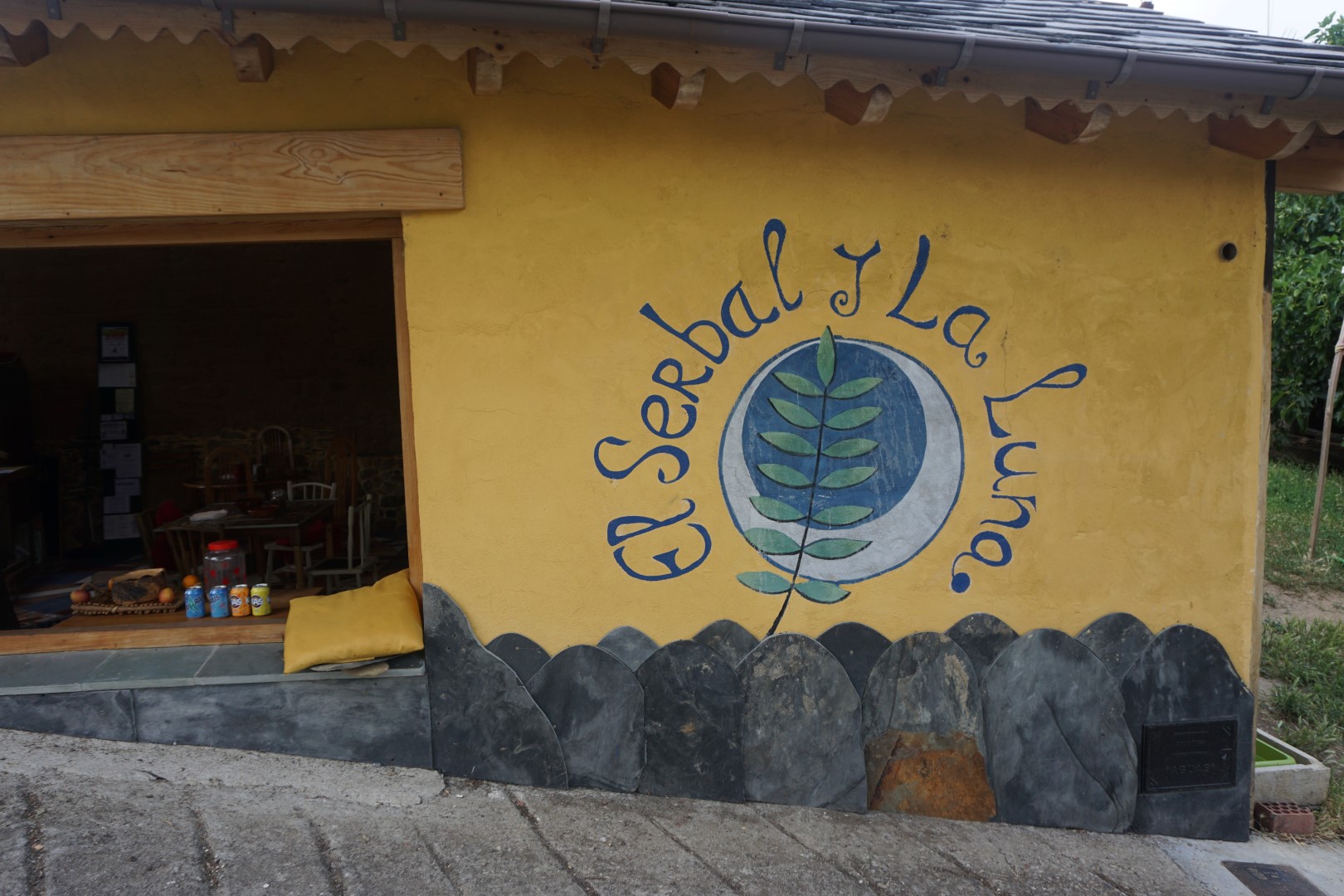 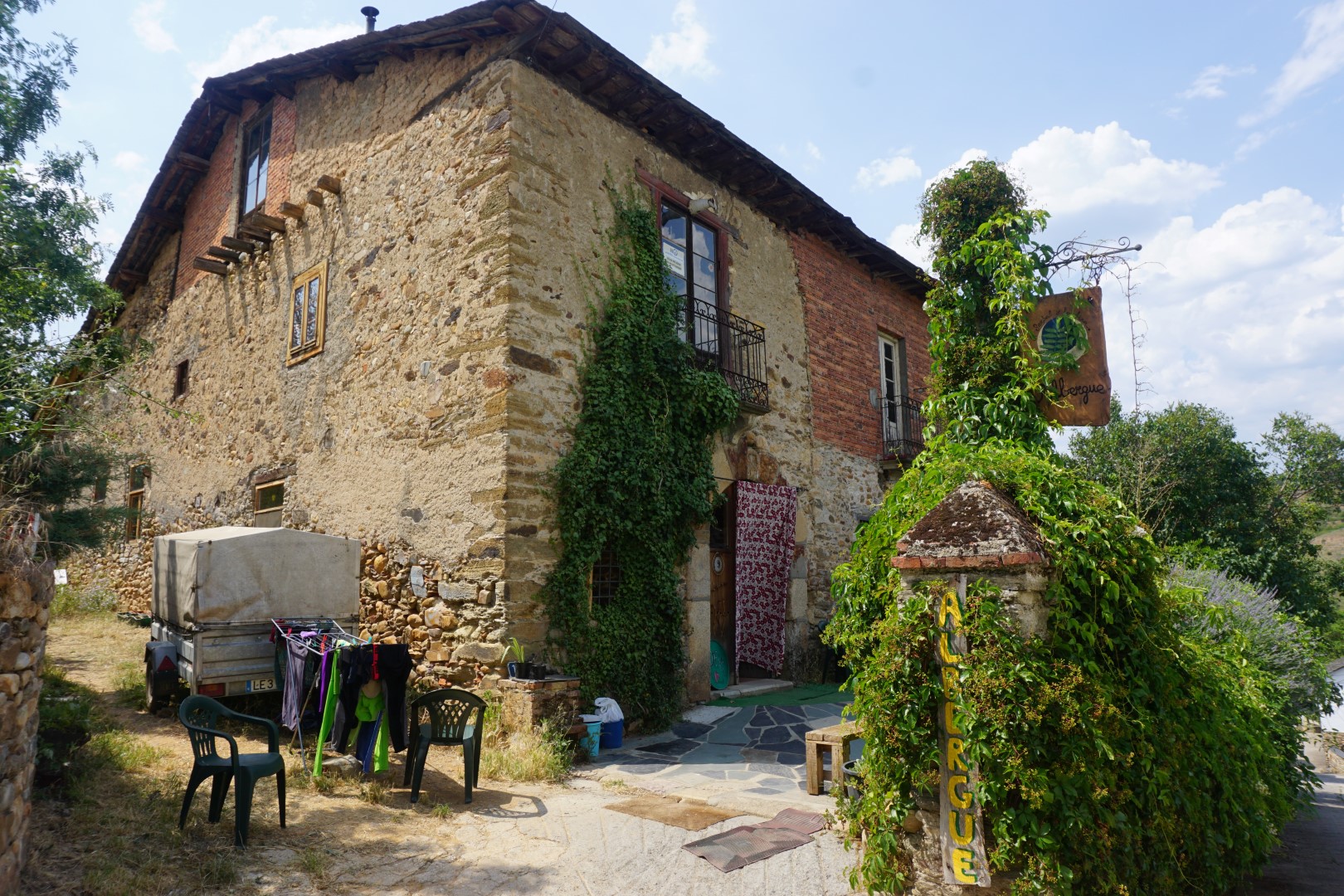 We arrive around 2pm and are the first in. The place is lovely and cold and dark. Both Jen and I pass out for a good few hours in the blessed cool. Hamish made his way upstairs to the ‘yoga room’ and fell asleep there instead. This is a very old building and decidedly quirky. The yoga room has two big French doors onto a balcony, both doors are open. Then I realise that there are two bird’s nests in the wooden ceiling of the room. As I sit there a mother bird flits in and out feeding a nest of youngsters. Unbelievably there’s no mess at all on the carpet. Not sure how they manage that… 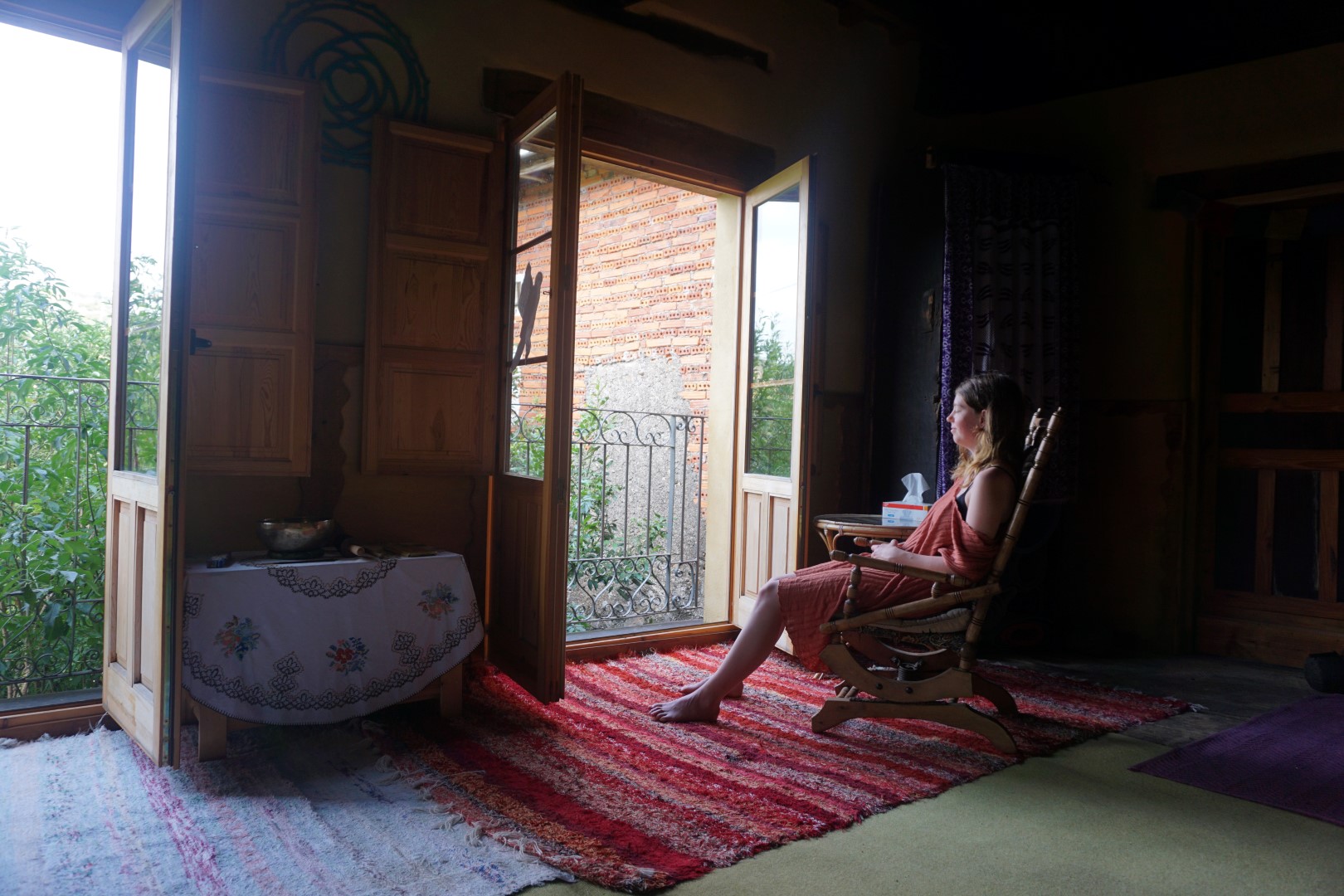 Our host is a Californian and the other residents are a German chap from a very small town and an American girl from New York State. We have interesting conversations.

We’re here fairly early so the long afternoon is spent sleeping and reading. I’m well into ‘The Martian’ by Andy Weir. It’s a good read and an example of ‘hard’ sci-fi in that he expends a lot of words on real science. Nothing too metaphysical. It seems almost wrong to read such a book in such a hippy albergue…

Dinner is served at 8pm and we fall into bed at 9:30. Jen is very cocerned about her leg. If it still hurts in the morning she and I will get on the bus and give her leg a full rest day.

The albergue bedroom is cool and quiet and we sleep well. For only the second time on the trip I reach for a blanket in the middle of the night.