Just around the corner from the cathedral and 15EUR including breakfast.  Like most albergues that provide breakfast the host sets things up the night before and you help yourself to bread, jam, juice and coffee and let yourself out by 8am at the latest.

We’d had a good nights sleep…

…and it was raining slightly (and we’d foolishly sent our Rab rain jackets home the night before) so we loitered in the convivial kitchen talking to our fellow travellers from Korea, Australia and the US. 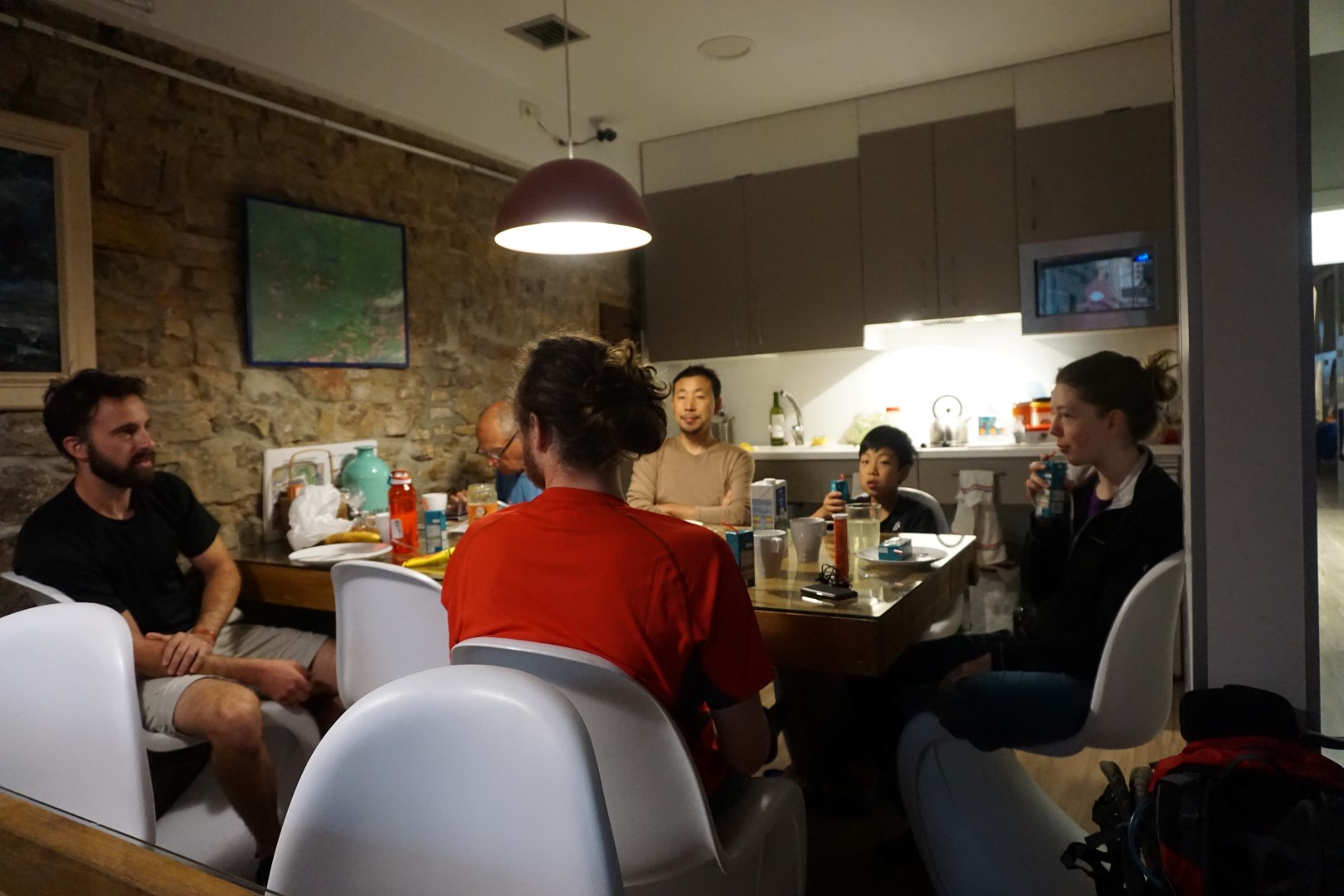 Around 9am we set off, hoping that Hamish’s ankle would hold up.  We’d decided to use one of the courier services that transport baggage from town to town and 5EUR got Hamish’s ankle a good rest (and I confess that Jen and I took advantage and we stuffed H’s pack as full as we could with all our bits and pieces).

The hills around Pamplona are covered in wind turbines, and, indeed, it was consistently windy as we wended our way along the 14 km or so to the top of the range of hills that lies to the west of the city.

Here we find one of the highlights of the trip, the monumento peregrino.

There was much rejoicing… 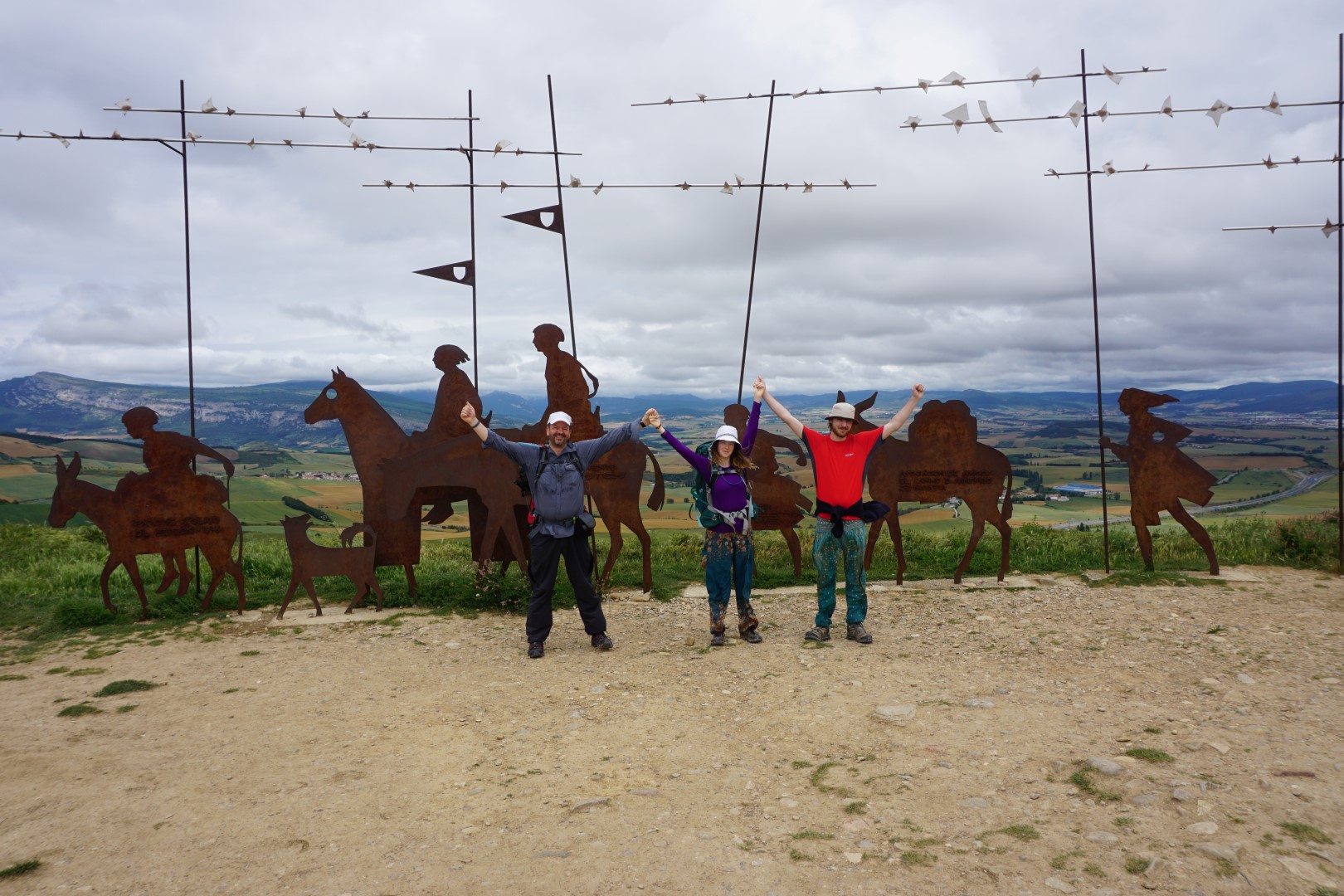 An inscription on one of the donkeys… 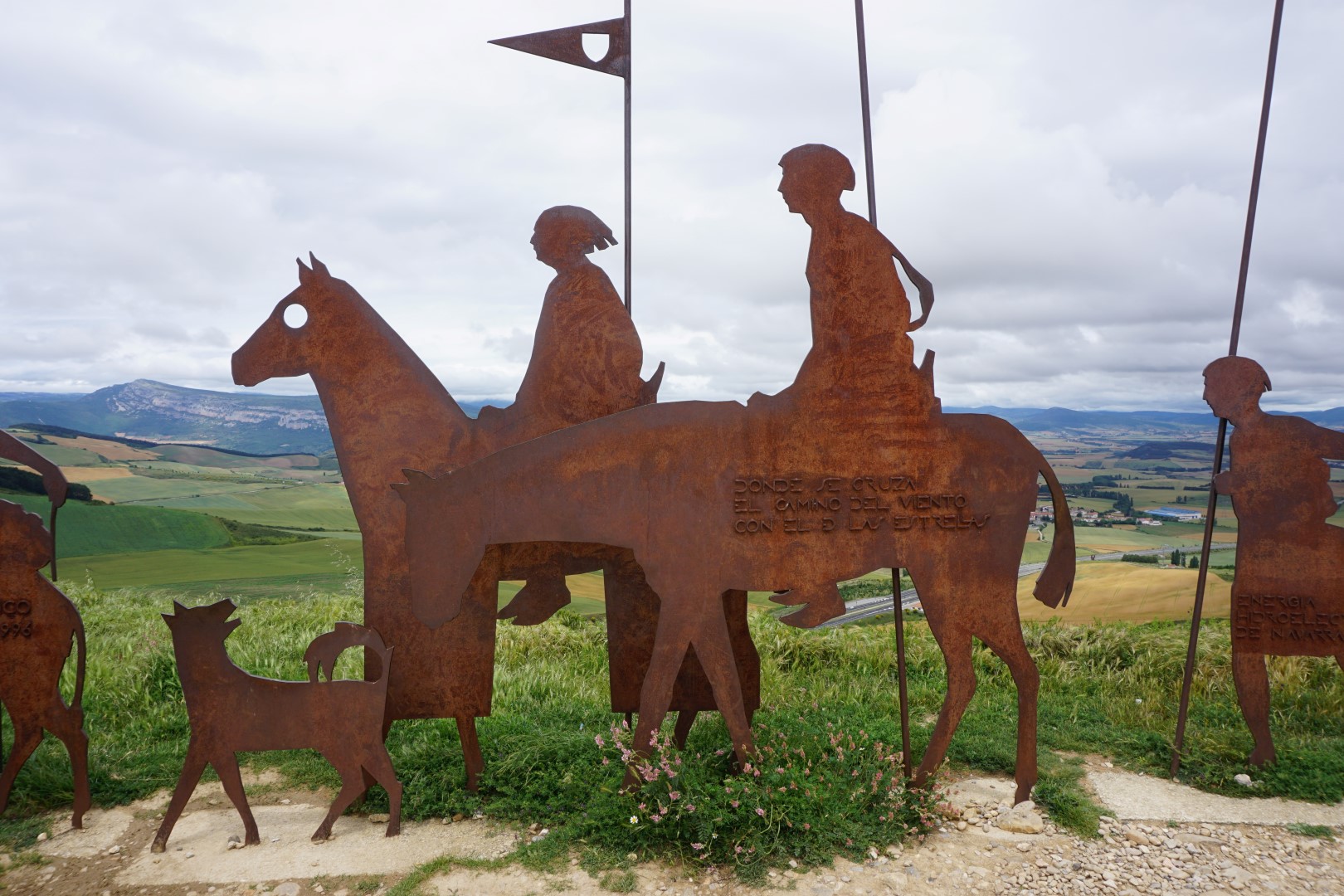 …reads “donde se cruza el camino del viento con el de las estrellas” which in English means “where the path of the wind crosses that of the stars”, a reminder that our destination is Santiago de Compostella – the milky way, or way of the stars.

The wind blows hard up here and behind us was the thrum thrum of many wind turbines. 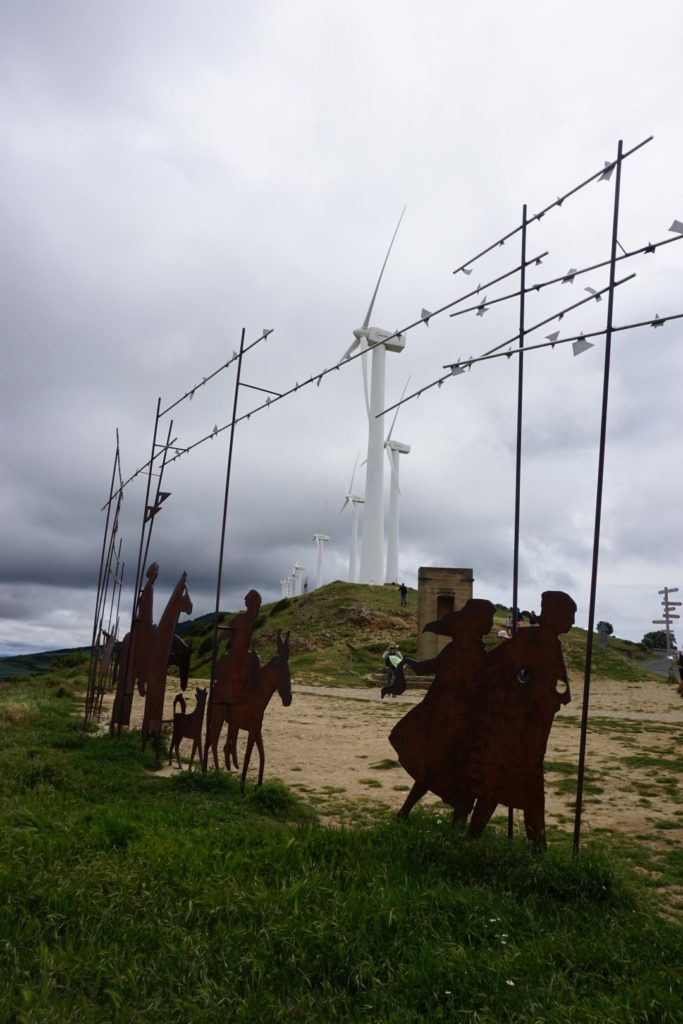 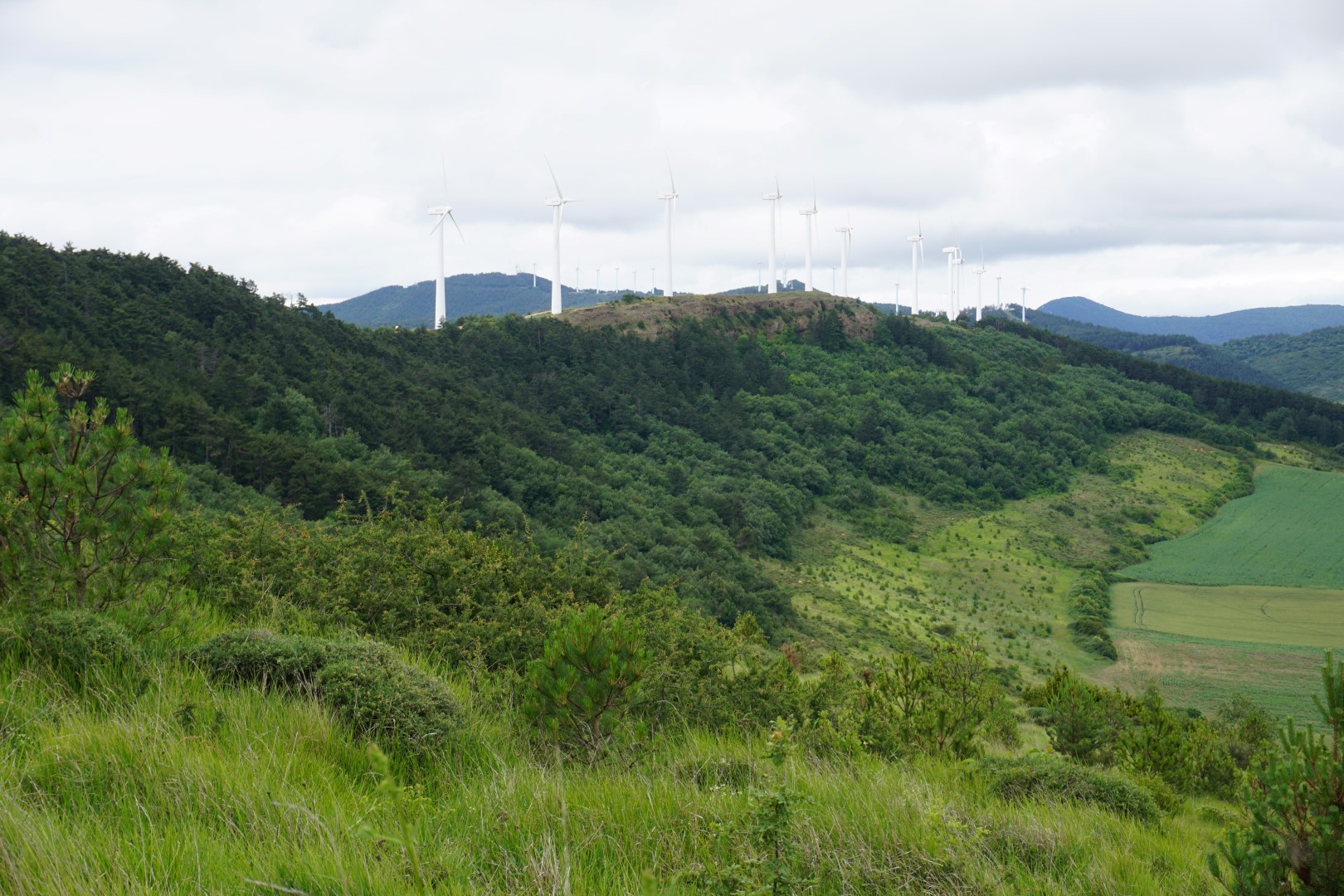 Getting to this monument was something of an ambition of mine. Now I really was a peregrino. We were all suffering from CALS (Camino Adjusted Lachrymosity Syndrome – in which you, ahem, get all emotional over things that would pass you by in real life – more on this later…) so we shed a collective tear and moved on down into the valley beyond.

We’ve travelled from the Pyrenees, which look like parts of Switzerland to me, into Navarra, which looks like Tuscany. The sun was shining, the crops were bursting out of the ground and the whole thing looked like one of those paintings in the National Gallery.

Hilltop villages with perfect churches were every few kilometres,

All this time we were watching the sky as the clouds gathered and we sensed that the afternoon might not go so well. Indeed, around 4pm the thunderclouds of judgement struck. 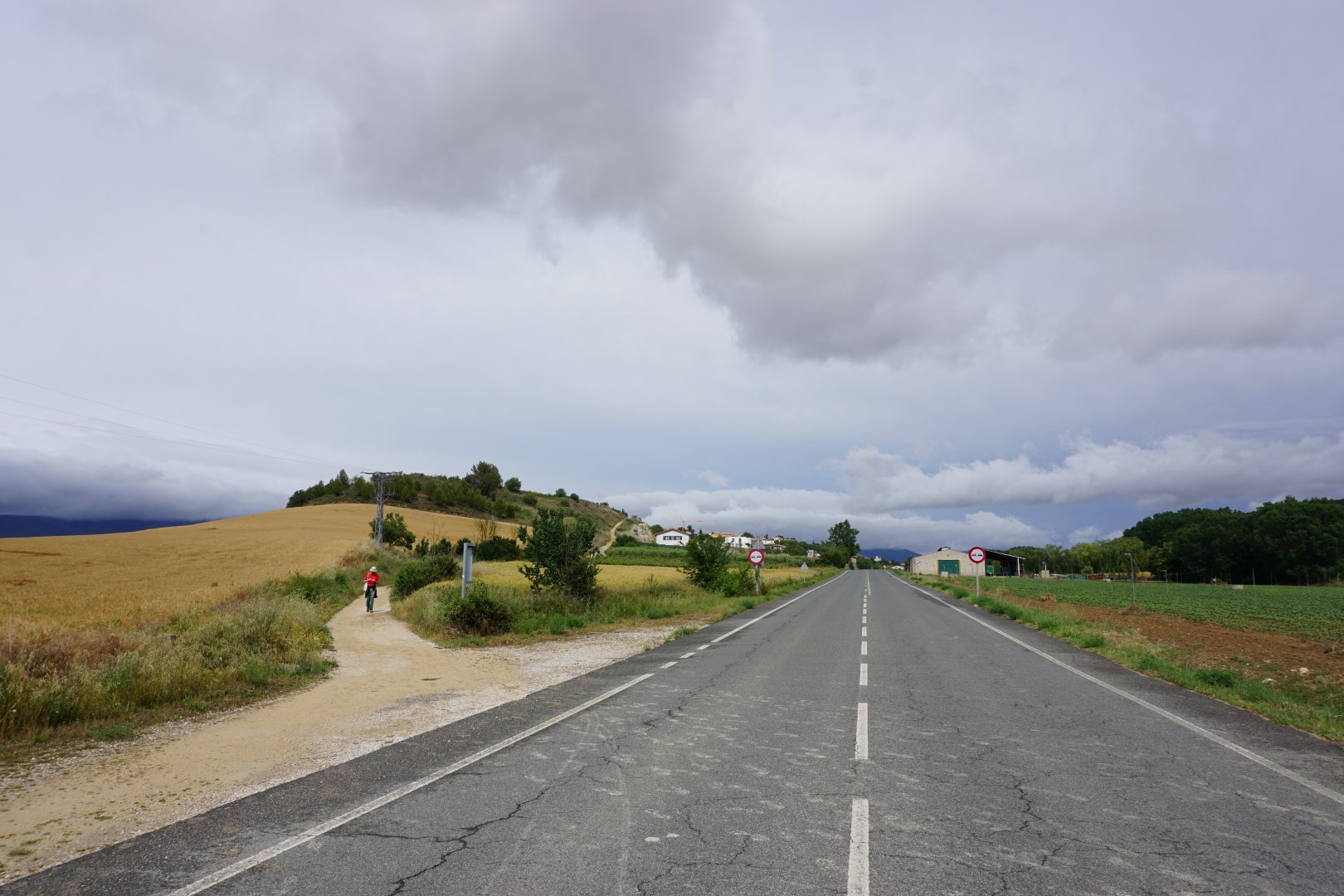 We hid in a cafe and contemplated getting a taxi for the final 7 km (aaaargh!).  The rain cleared somewhat and we set off to arrive wet and bedraggled at Albergue Estrella Guia, a second floor flat, in Puente la Reina. Our splendid host was an A-grade hippy.  The incense sticks were out and the flat was covered in inspirational messages of peace and goodwill.  Hey, if you can’t be a hippy on the Camino, where can you?