Steve : Up at 6 after a literally infernal night (see yesterday’s post). Haven’t felt this tired since we tried to give away Jen to Homerton Children’s Hospital at 2:30am one morning when she was 18 months old. “Here, take this child, we haven’t slept for months, thank you, bye…”.

Anyway… the hospitalero tells us over breakfast that it’s around 10 deg C hotter this year than last. Oh dear.

I plaster my feet with some fake Spanish Vaseline (someone recommended it and I’ll now try anything) and stagger out the door. 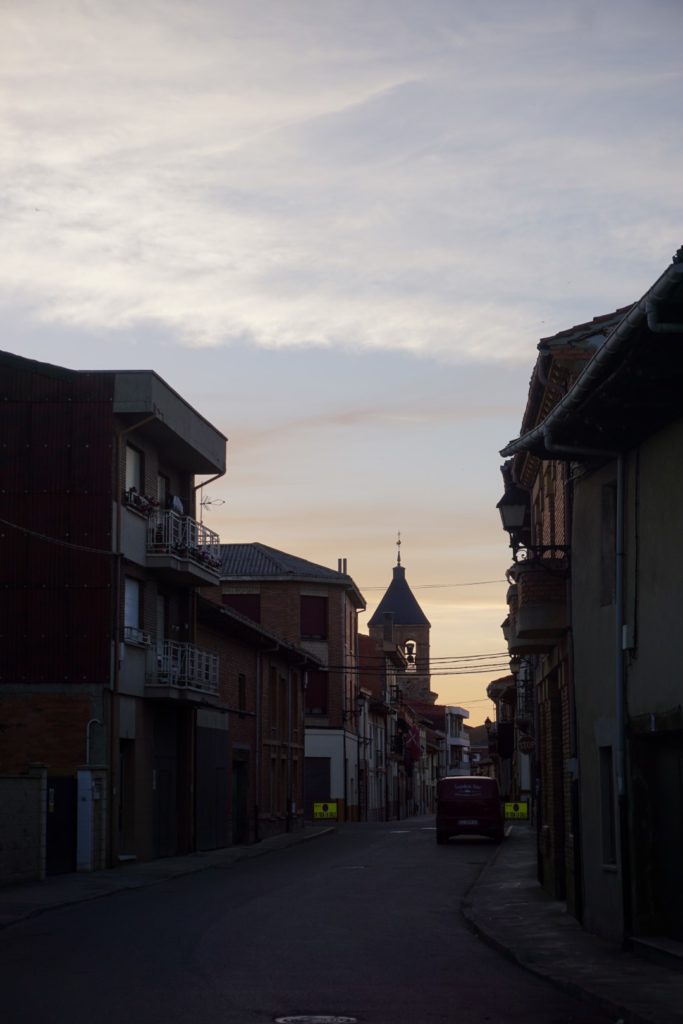 Across some scrub and up a hill – finally the path was diverging from the main road. Took lots of photos of half abandoned Spanish villages… 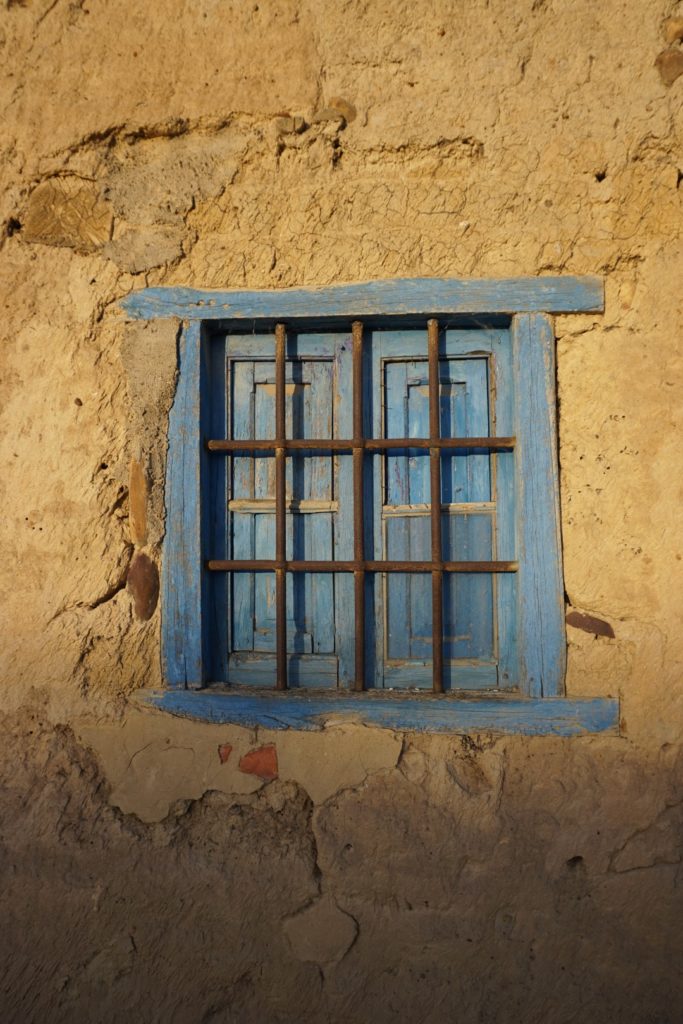 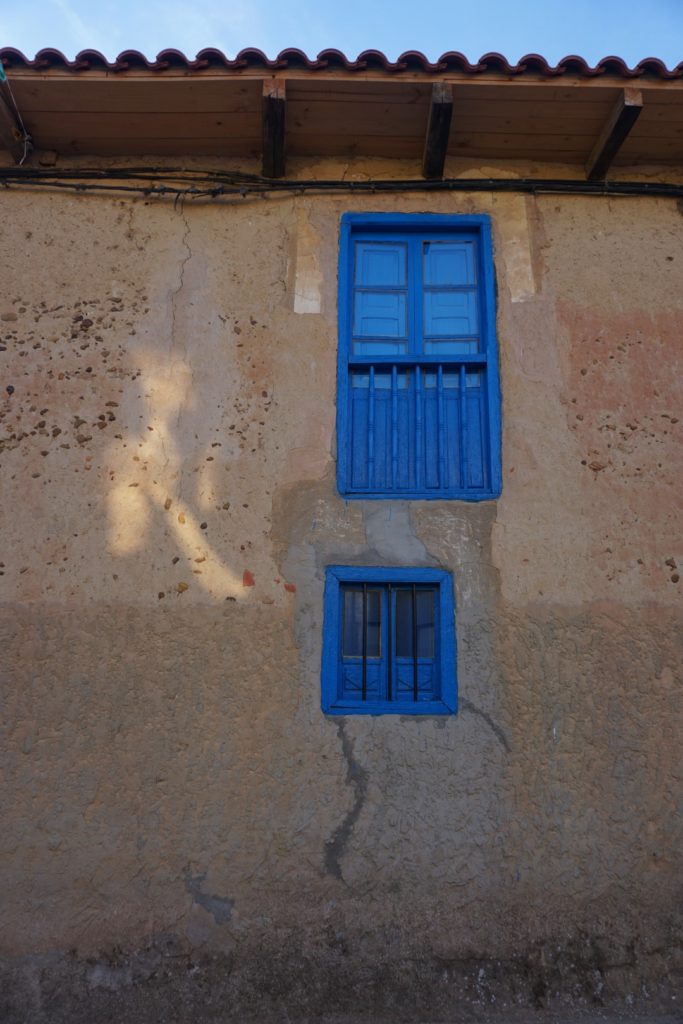 The evil sun was up and doing it’s thing but I thought it wasn’t as bad as yesterday. Maybe this peely-wally Scotsman was finally getting used to the orange orb thing in the sky? 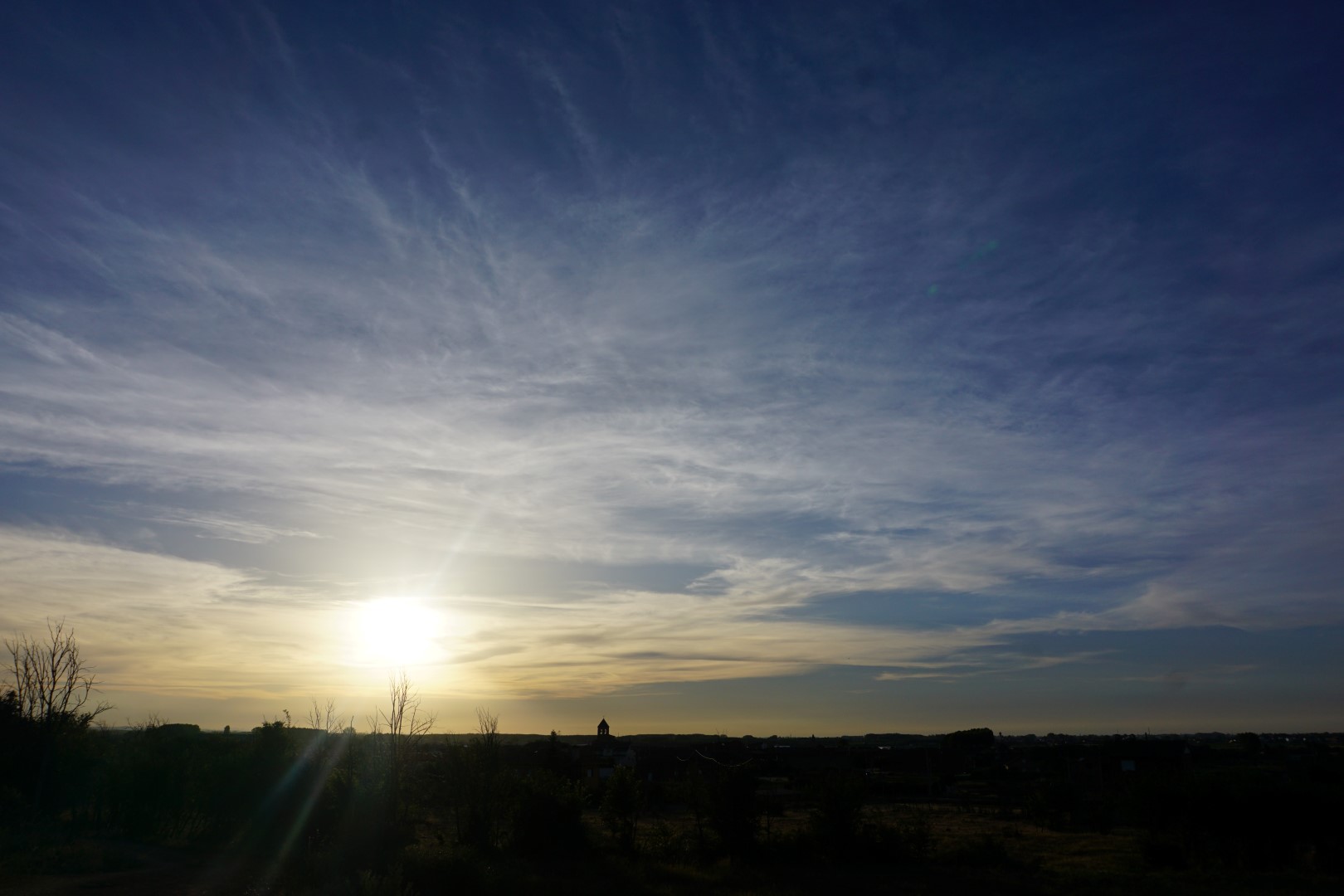 After a couple of hours rambling through some nice countryside I came upon what can only be described as an oasis.

A couple of locals had set up a stall, with covered sitting areas and interesting bits and pieces. 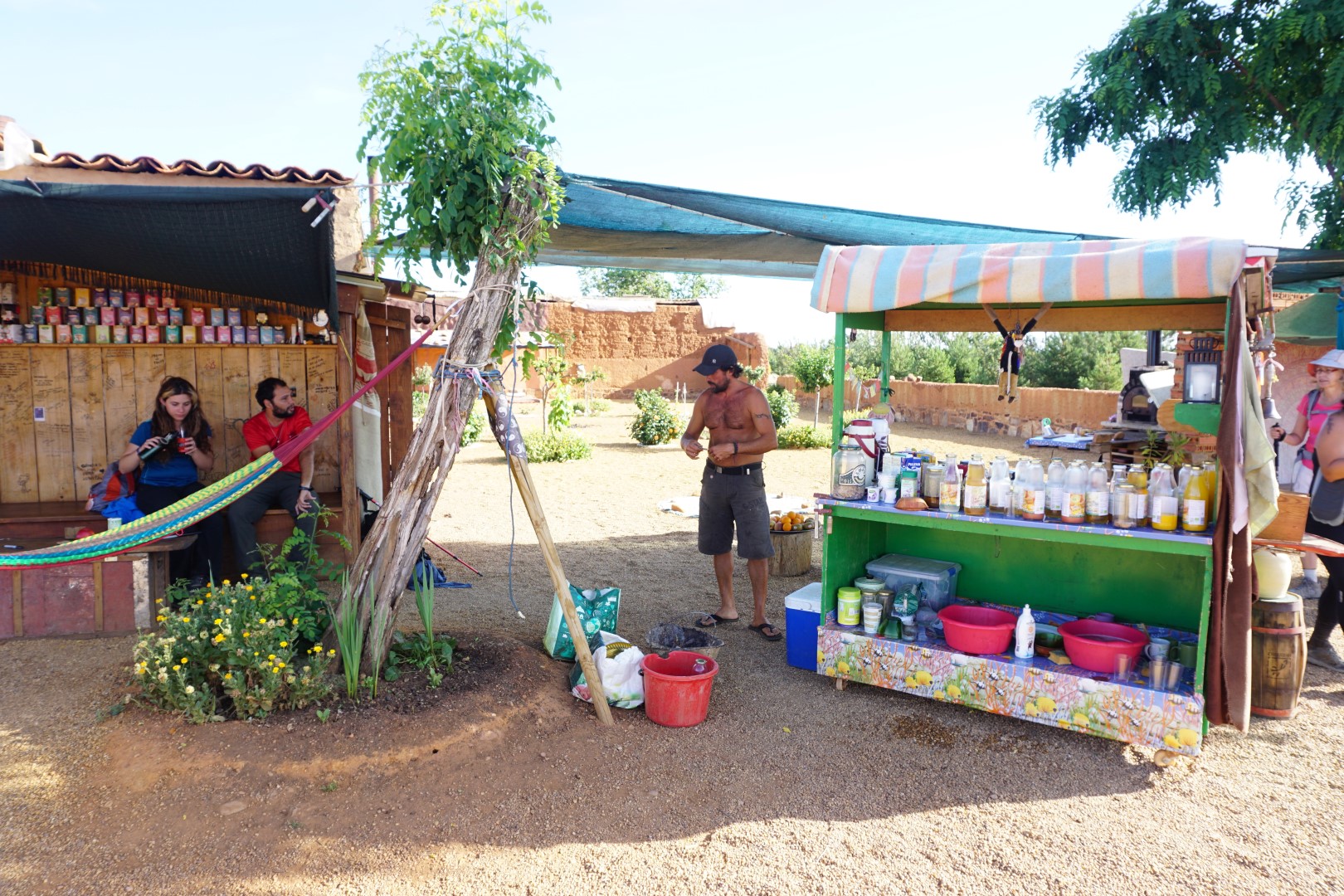 The stall was piled high with fruit, fruit juices, coffee, a huge variety of teas and they even had a pizza oven. A large sign said in several languages “Free, help yourself”. And it really was. I filled up on fruit, coffee and a took a couple of boiled eggs. I tried to wash my cup and our benefactor insisted that I let him do it. There was a small box marked ‘donativo’ but there really truly was no sense of any expectation. All our host wanted was to hug everyone as they left and wish them Buen Camino. I put a few euro in the box and left, thinking that some folk really do make the world a better place.

Back to the trail along the roadside, unfortunately, as I approached Astorga.  The roadside trail may be boring but the graffiti isn’t.  Camino graffiti is definitely of a higher standard… 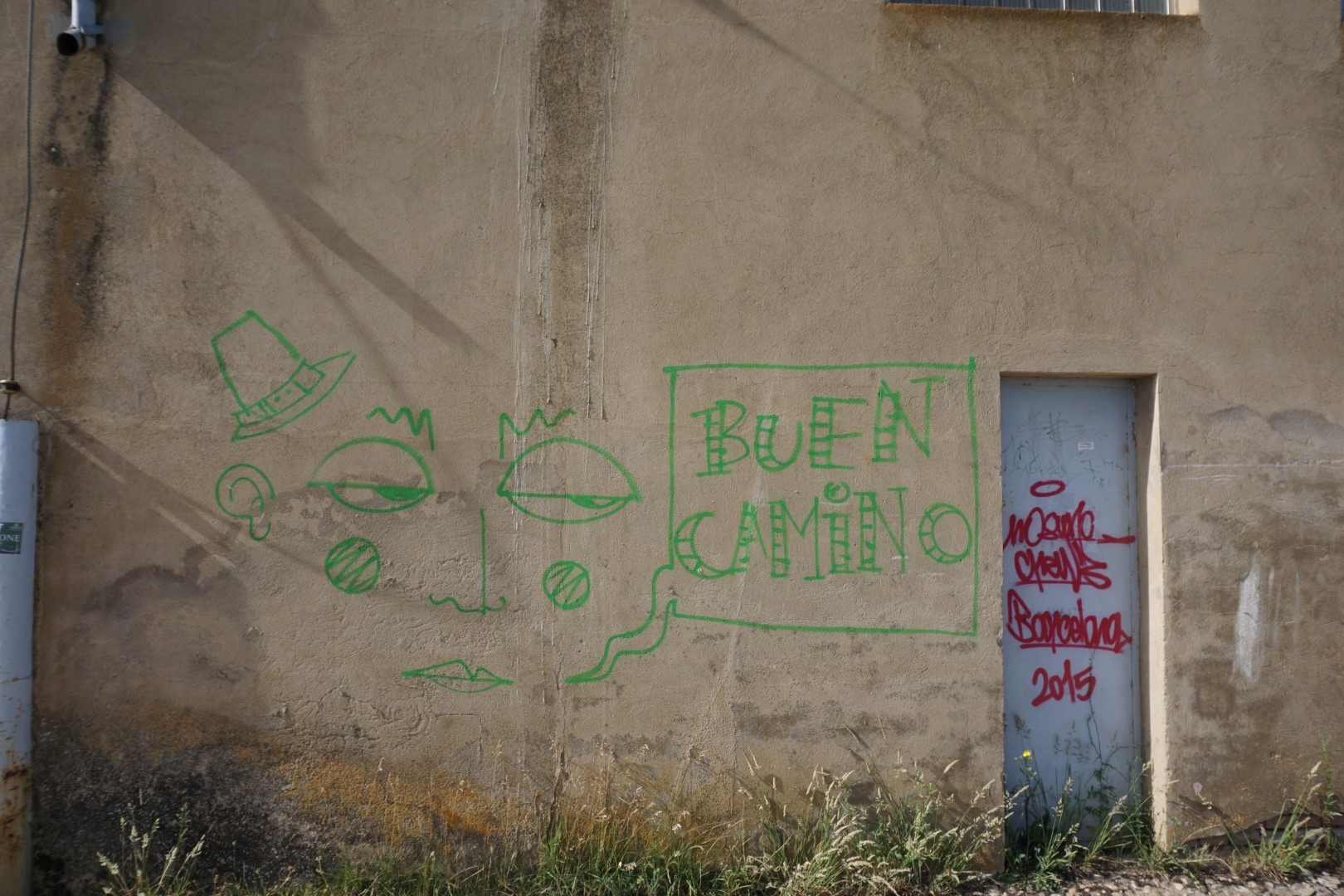 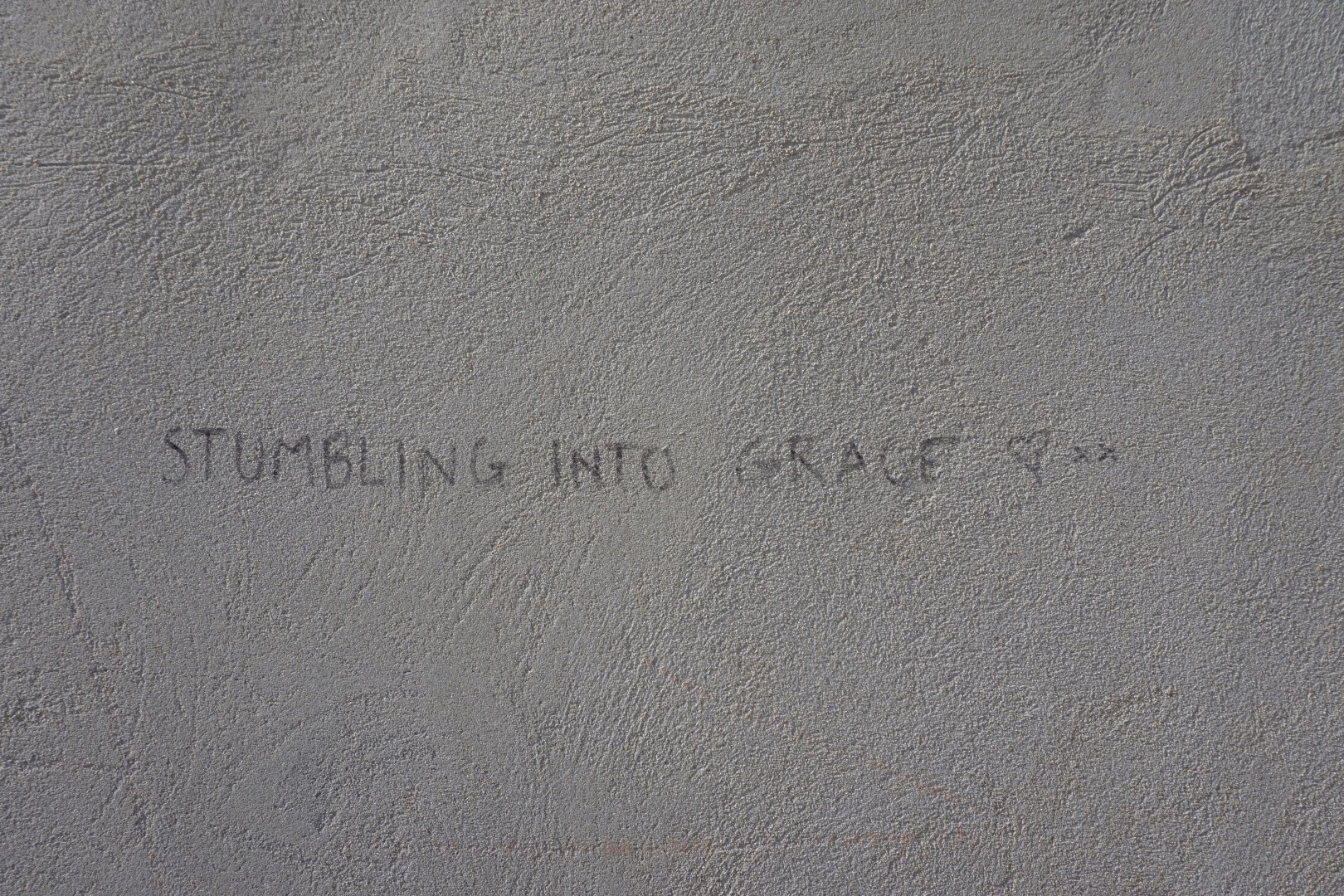 Something big was happening in Astorga – the main square had a religious statue in it and it looked like a procession might be happening.

But peregrinos can’t hang about. We had decided to aim for a vegetarian albergue in Murias, so after two more breakfasts, one in each end of the town, I headed out into the midday heat to get the last 5k done before melting time.

I arrived at the very splendid Albergue Casa las Aguedas around 1pm and checked us all in. 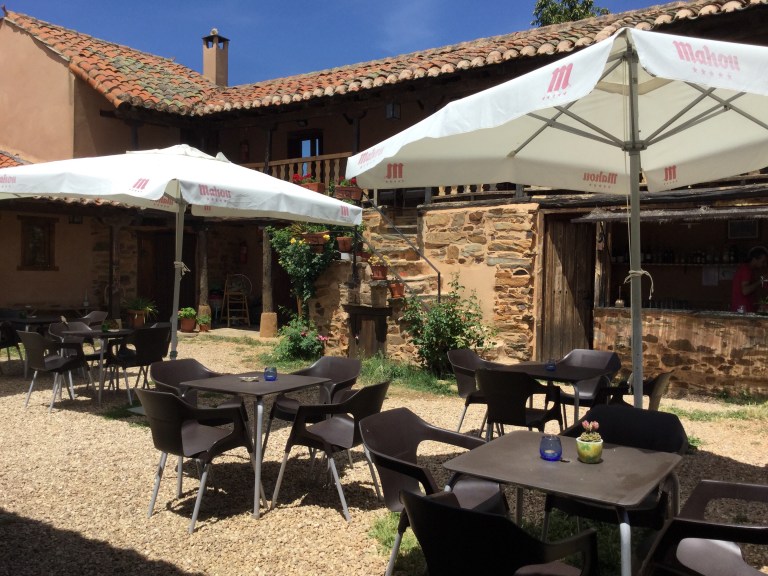 Then rinse, lather, repeat of self and clothes and the lounging around can begin….

J and H didn’t show up until late afternoon after an epic 35km hike in the heat of the day. Thankfully today’s heat of the day wasn’t as bad as yesterday but nonetheless – much respect!

Dinner was served at 7pm and set a new high standard. Gazpacho soup, couscous with grilled vegetables and poached apples and pears for dessert. Incredible value for 10 euros.

We went to bed not long after 8pm. H was asleep immediately and didn’t stir until 6am the next day. I was too hot, again, and it took me a good while to get to sleep. But no snorers….

Best albergue yet, I think.