Steve : Another beautiful day. In an effort to beat the sun we got up at 5:30am when the air was cool and damp. Out on the trail by 6am. 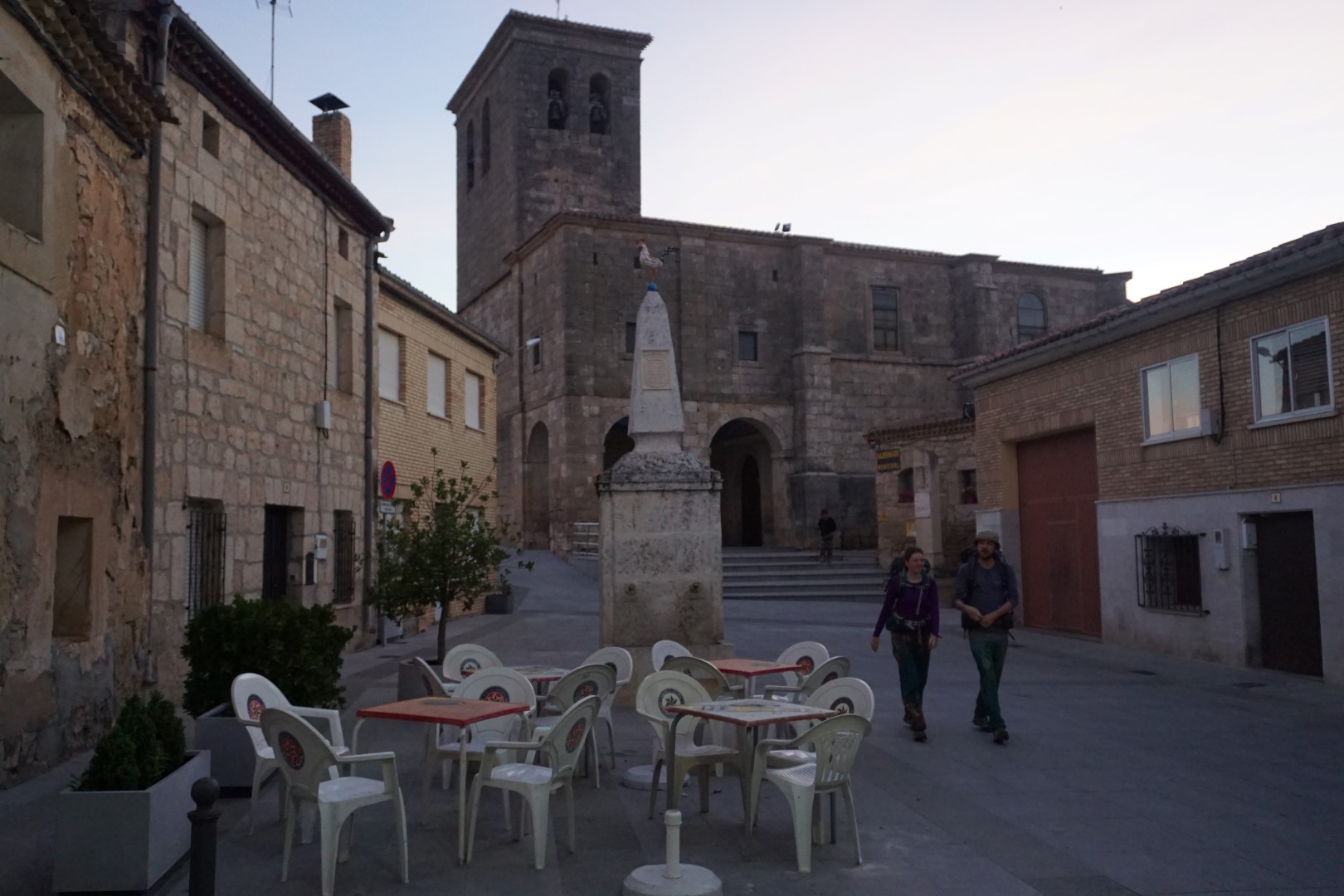 A short climb out of town and we were on the meseta again. I know I keep saying this but this place really is magical. Last night we met a couple of Frenchmen who had walked from Grenoble and were doing 40+ km/day. They arrived in Hornillos around 7pm and were going to keep going. It was a full moon and they wanted to cross the meseta by moonlight. What an excellent idea.

The sun rose at our backs around 6:30. This place looks like The Shire from Lord of The Rings. 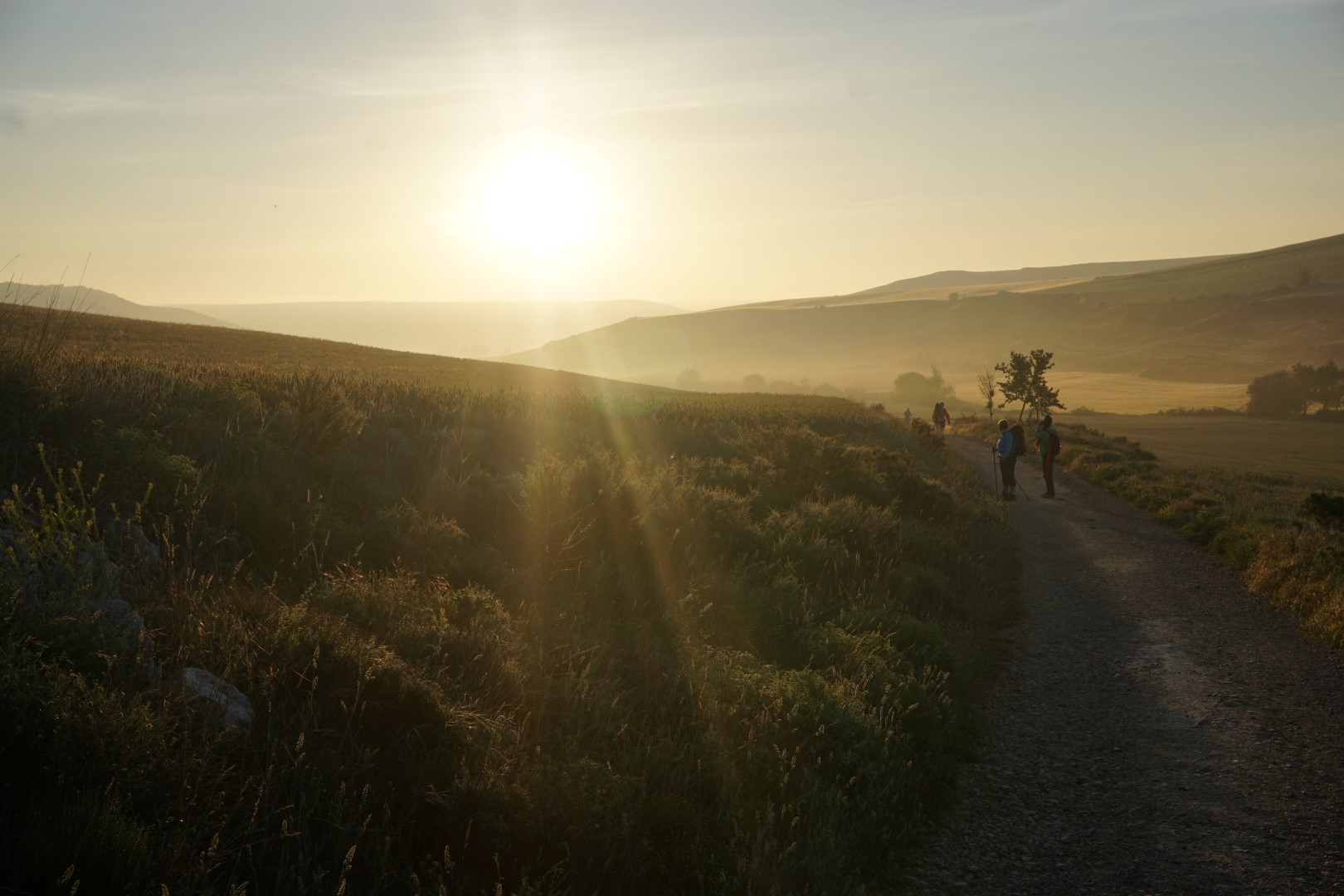 A breakfast stop around 9am in Hontonas.

We passed through ruined churches… 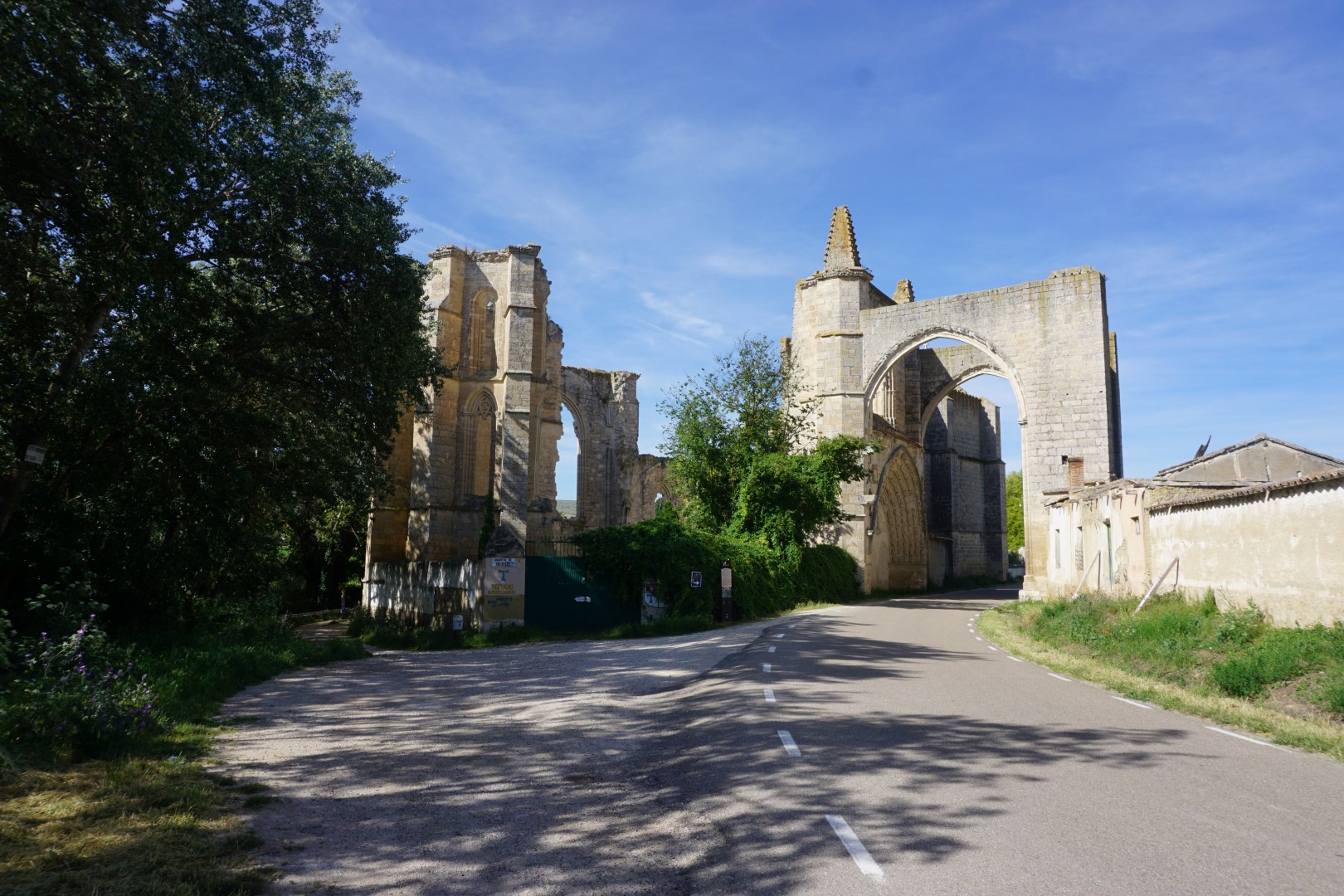 …and finally saw the town of Castrojeriz and it’s ancient hilltop castle. 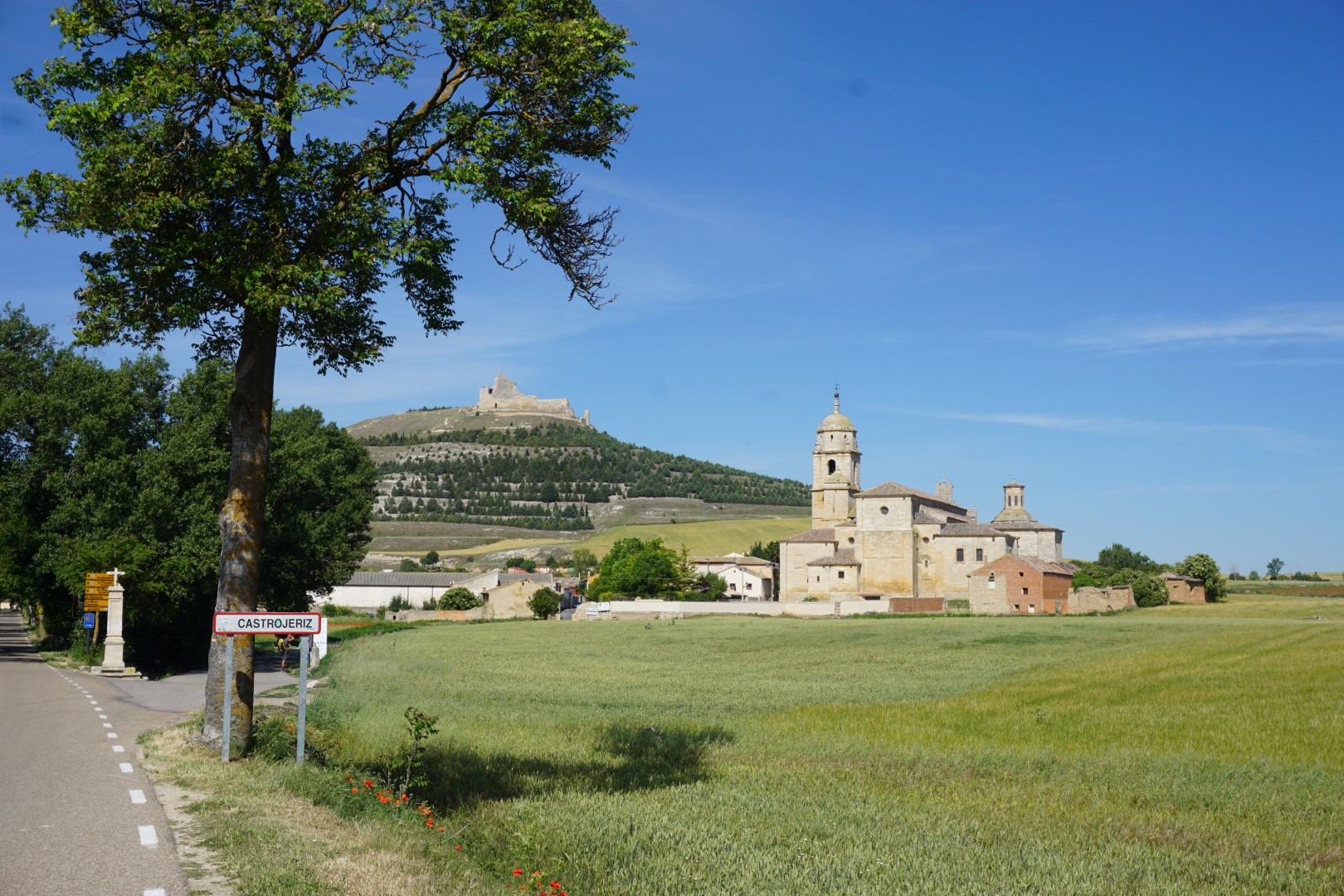 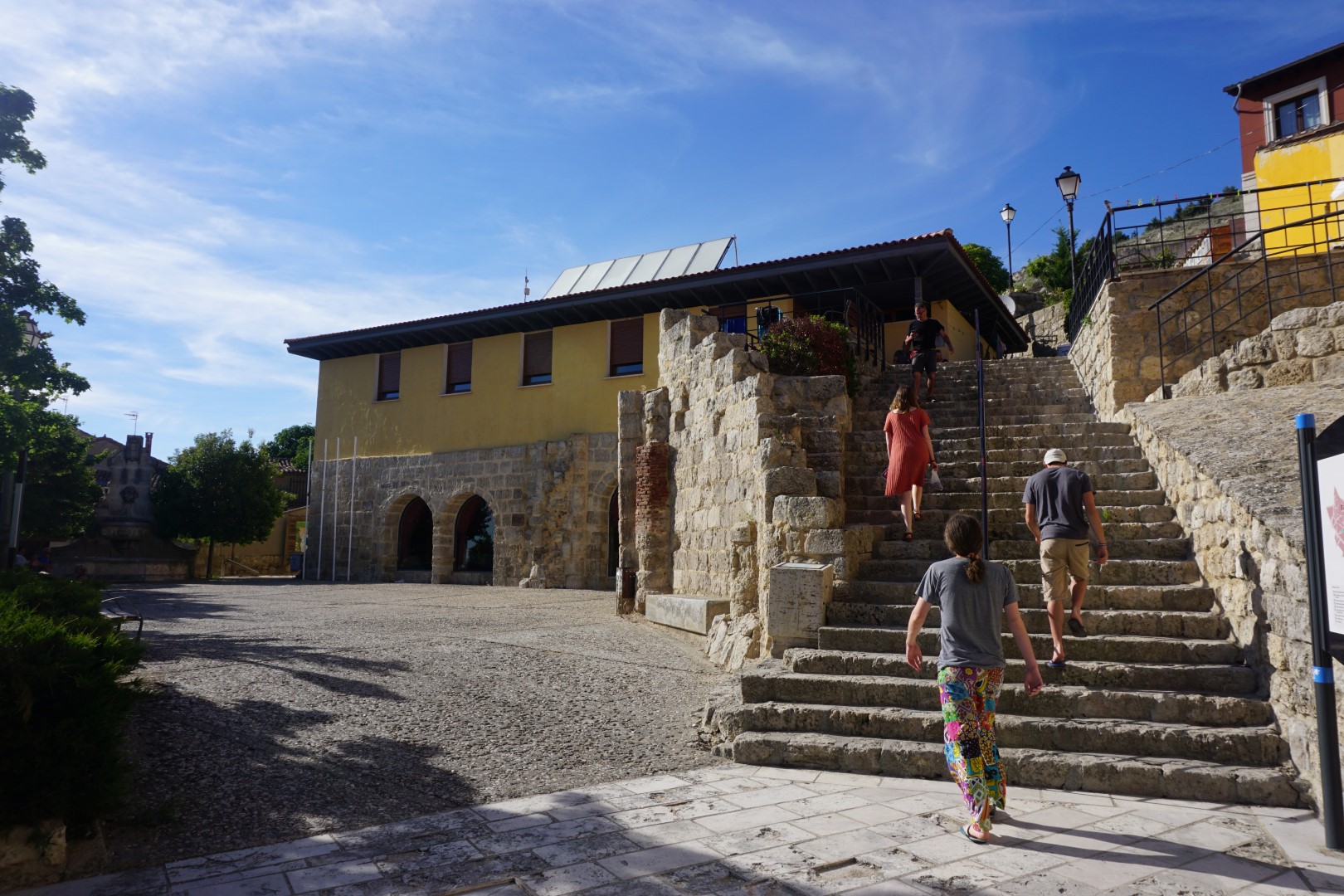 It was getting proper Spanish hot.

We couldn’t quite suss out the town of Castrojeriz. Like a lot of the villages through which we walked there were many ‘Se Vendre’ (‘For Sale’) signs.

Similarly for this small town of population 500, according to Brierley. It looked like some money had been spent on Castrojeriz. There was a rather good museum of the Camino that we visited and the street furniture of road signs and lampposts were all new and of interesting design.

Half way up the high street (the whole town is strung out along a single road) was a house with a painted bicycle outside. ‘La Casa del Silencio’ read a sign hanging on the bike – ‘The House of Silence’. 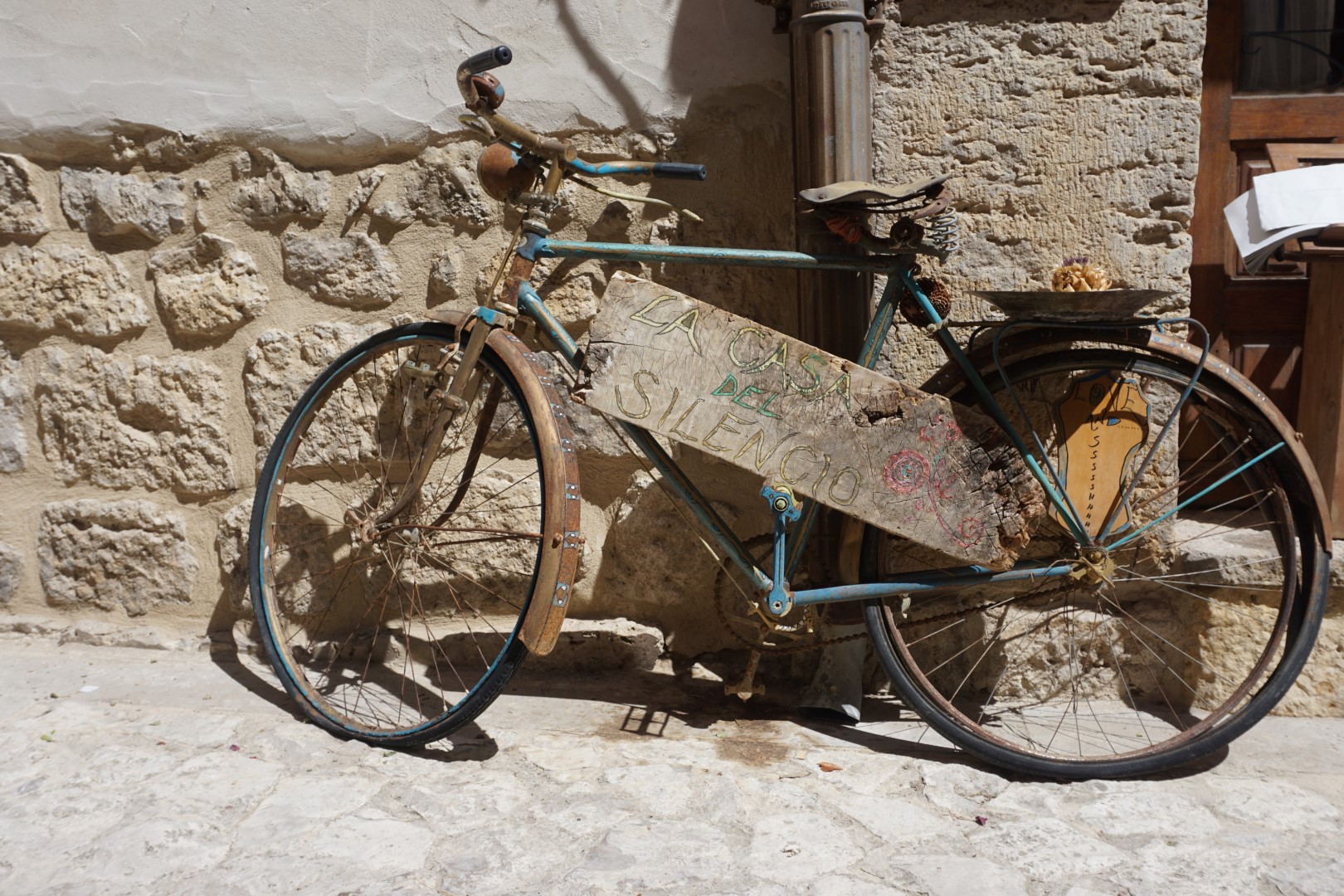 We entered in to find an entire house filled with art, books, music and no-one around. It was really lovely. We must have spent the best part of an hour looking at the art and drinking in the atmosphere.

Grade One Hippy and all the better for it. If you’re in Castrojeriz pay it a visit.

Now, we’re still sending on a bag each day because we’re basically lazy. Each morning for the last week we’d attach a courier envelope, with 5 euros, to our bag of stuff and it would automagically show in the albergue that evening. But in Hornillos we’d not read the small print (we’d never read the small print) and we didn’t know we had to phone the courier to arrange pickup. We thought that the couriers just visited all the albergues and picked up whatever was there. So, we found ourselves in Castrojeriz minus clean clothes and the other pilgrim essentials that we were too lazy to carry.

Oliver, the immensely helpful German ‘hospitalero’, who actually ran the hostel, sorted it out for us. Our bag showed up around 3pm and we felt very stupid and grateful.

Dinner that evening was a big pasta-and-thing concocted by J and H. We shared it with Tom, an American gent from Florida, who was good company.

Early to bed as tomorrow is a long 25km and we need to be up to beat the sun.