Bayonne: A shaky start – I didn’t realise that my Fitbit watch was still on UK time so when Jen knocked on the hotel door at what I thought was 6:09am it was actually 7:09am and we had a train to catch at 7:46am.  We made it and set off to St Jean.

St Jean: Then to the Pilgrim Office to pick up the ‘Pilgrim Passport’ without which you cannot stay in the albergues (I’ll get Jen to write a glossary of Camino terms).  It was getting real, 6 months of planning and here we (eventually) were. 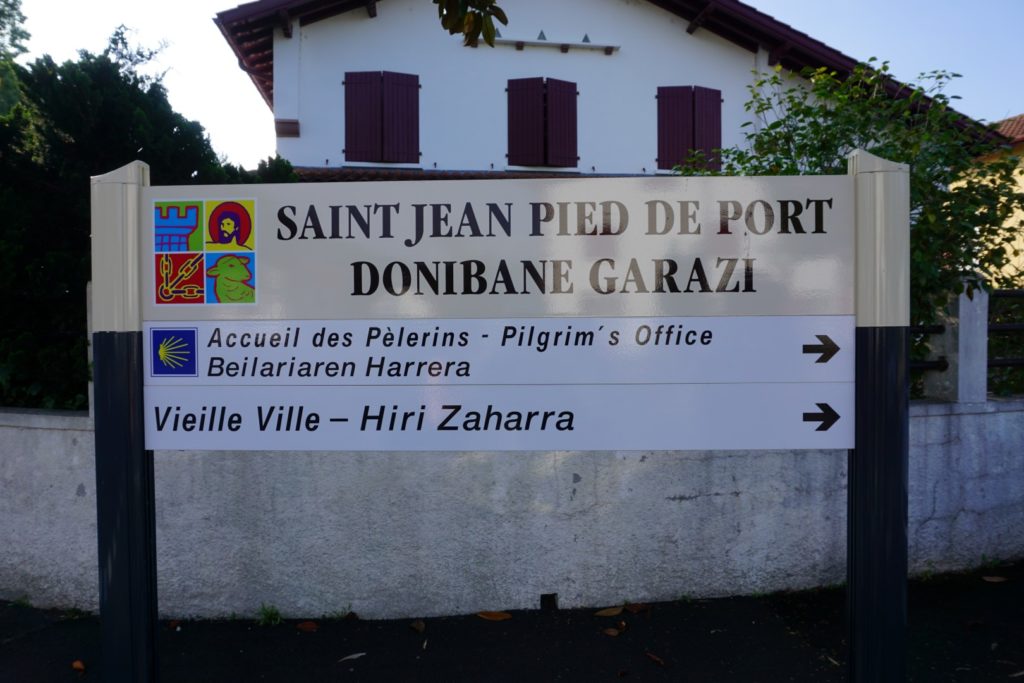 Now, it may be corny, but they say that the longest journey starts with a single step.  So here are those steps:

By my reckoning when we reach Santiago we will be on step #1,000,000 or thereabouts.

The sun was shining and the birds were singing as we set off through the very picturesque town of St Jean towards the big hills of the Pyrenees.

Day One of the Camino is reckoned to be the most difficult and we were rather nervous.  It’s basically the equivalent of climbing Ben Nevis, Britain’s tallest mountain. You hear horror stories of people falling to their deaths and getting hopelessly lost. As I’m a regular walker in the Scottish hills I treat these things with respect.

As it happened it was all really rather easy.  I was expecting rough trails, as you’d find on a Scottish hill.  Instead 90% of it is tarred, and tarred to a higher standard than most of central Edinburgh.  I’m sure it’s properly nasty in winter but on this fine May afternoon it was almost a walk in the park.

So, from St Jean to Orisson, some 8km.  Note to future self: there’s a splendid albergue in Orisson with a magnificent view across the Pyrenees. Stay here if you ever do the trip again….

We stopped for lunch and toasted our success… 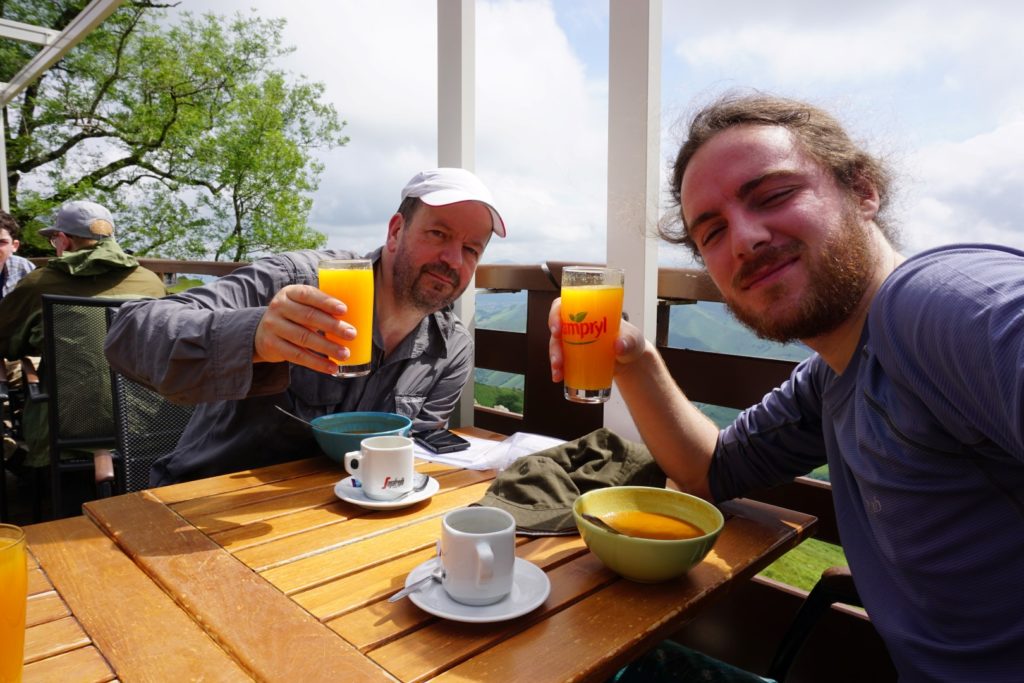 The road wound on and up and into the clouds. We passed the famous statue of the Virgin Mary and ‘Let it be‘ ran on my mental playlist. 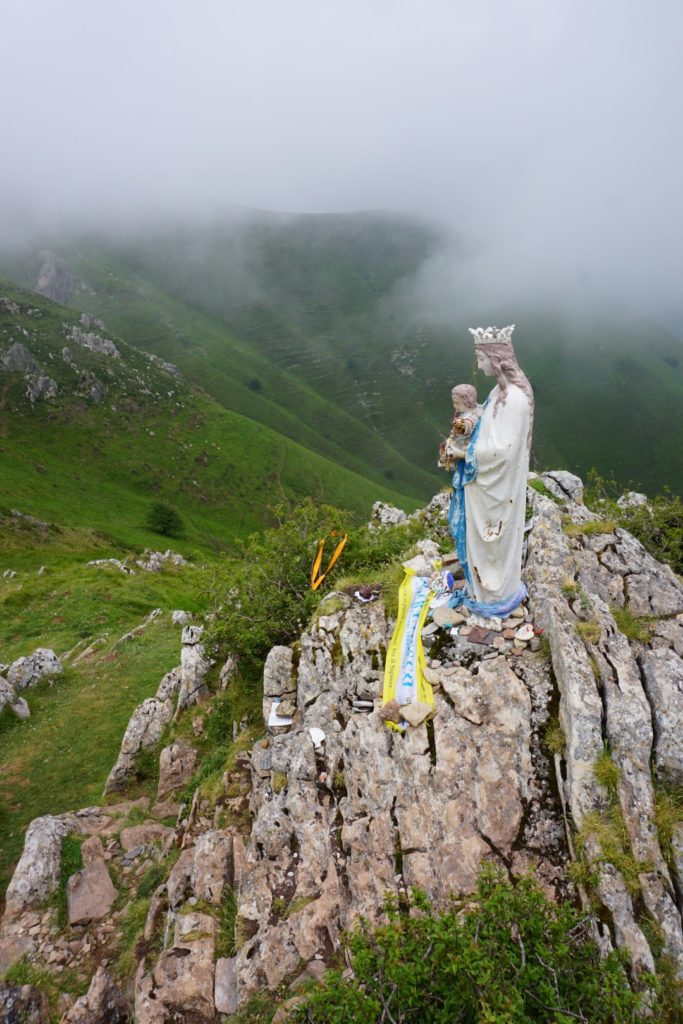 At some point mid afternoon we did a very rare thing – something that none of us have done before.  We walked into another country.  Left foot in France, right foot in Spain.  When did you last do that?

5:30pm and a little footsore but much relieved we came down the last few hundred metres into Roncevalles and the huge albergue. 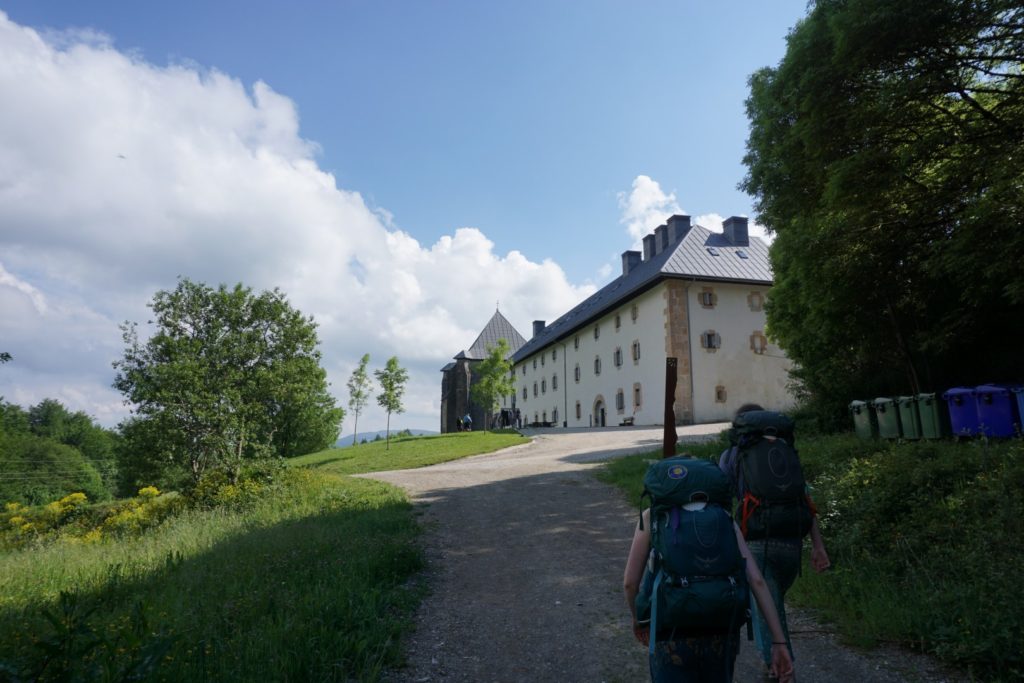 Now most pilgrims start by 8am at the latest and we didn’t leave St Jean until nearly 10, so we were amongst the last in.  By then the only spaces left were in an old dorm which we shared with some 20+ others.

I don’t know what the stats are but I reckon if you put any more than 5 people in a room one will keep the rest awake by snoring.  And, yes indeedy, we had a snore fest.  And – another thing – why do snorers always seem to fall asleep first?  I got out my Sansa Clip and listened to a ‘Kermode and Mayo Film Review’ programme and two Tangerine Dream albums but nothing could drown out the snorting.  I reckoned that I got 3 hours of sleep before the keen walkers were getting up at 6am for the day ahead.  Must try harder to fall asleep faster.

But! We are underway.  Day one wasn’t anything like as bad as I’d feared.  My Salewa shoes did the job (though I fear I have some impending blisters) and the Deuter pack worked fine.